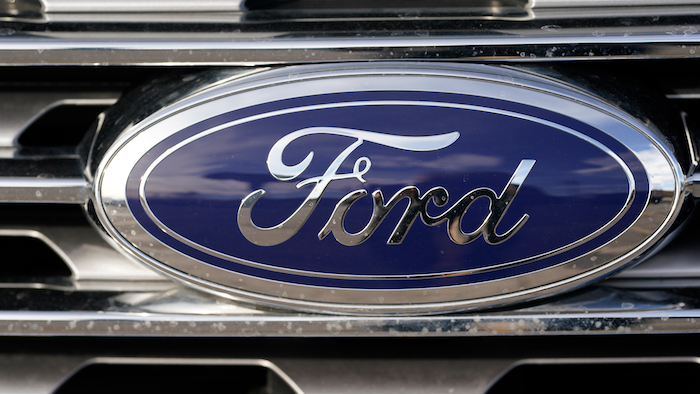 In this April 25, 2021 file photograph, the blue oval logo of Ford Motor Company is shown in east Denver. Ford Motor Co. is in talks with a computer chip maker GlobalFoundaries Inc. to shore up its semiconductor supplies as it tries to avoid factory shutdowns in the future.
AP Photo/David Zalubowski, File

DETROIT (AP) — Ford Motor Co. is in talks with a computer chip maker to shore up its semiconductor supplies and avoid a repeat of this year's auto factory shutdowns caused by semiconductor shortages.

Few details of the nonbinding agreement with GlobalFoundaries Inc. were released, but the deal aims to boost supplies with joint development of automotive-grade chips. And it could result in joint manufacturing to support the auto industry, the companies said Thursday in a prepared statement.

Ford has been hit particularly hard by a global chip shortage that has weighed on nearly every automaker. Like other companies, Ford at times has had to temporarily close auto plants and even build models without some computers, and install them later.

The company's U.S. sales fell 27% from July through September and it lost 2.4 percentage points of market share largely because it couldn't produce enough vehicles to meet consumer demand.

“This agreement is just the beginning, and a key part of our plan to vertically integrate key technologies and capabilities," said CEO Jim Farley, who is pushing Ford to develop more of its supply chain to ensure the parts keep flowing.

Spokeswoman Jennifer Flake said the companies are at the “memorandum of understanding” phase of their relationship but want to work together to design chips and possibly leverage their manufacturing experience.

GlobalFoundaries, based about three hours north of New York City in the town of Malta, says on its website that it has chip factories in the U.S., Germany and Singapore, and is among the world's largest independent semiconductor makers with more than 15,000 employees.

Financial details of the agreement were not released, it does not involve cross-ownership between the companies, the statement said.

The chip shortage has roots to the spring of 2020 as global automakers were forced to shutter factories to stop the spread of the novel coronavirus. The factories came back online sooner than expected with safety precautions, but by then, many chip makers had shifted production to high-demand consumer electronics.

A fire at an automotive chip plant in Japan exacerbated the problem. Since most chips are made in Asia, the shortage highlighted a lack U.S. chip-making capacity that has drawn the attention of the Biden administration.

Industry executives and analysts predict that the shortage will last well into next year, and that automakers may not get back to normal production until 2023.