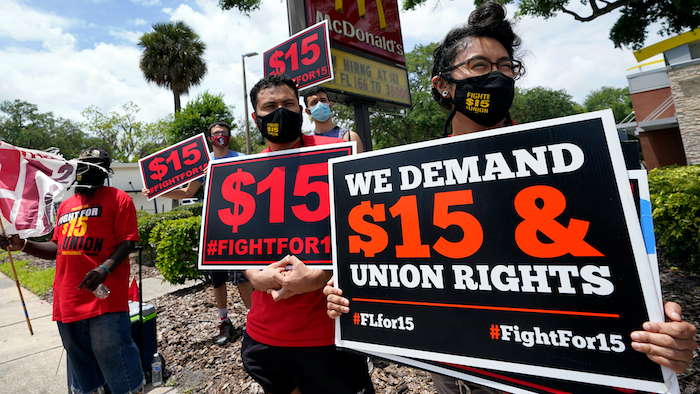 The fight over the minimum wage continues.
AP Photo/John Raoux

For decades it was conventional wisdom in the field of economics that a higher minimum wage results in fewer jobs.

In part, that’s because it’s based on the law of supply and demand, one of the most well-known ideas in economics. Despite it being called a “law,” it’s actually two theories that suggest if the price of something goes up – wages, for example – demand will fall – in this case, for workers. Meanwhile, their supply will rise. Thus an introduction of a high minimum wage would cause the supply of labor to exceed demand, resulting in unemployment.

But this is just a theory with many built-in assumptions.

Then, in 1994, David Card, an economist at the University of California, Berkeley, and one of this year’s Nobel winners, and the late Alan Kruegerused a natural experiment to show that, in the real world, this doesn’t actually happen. In 1992, New Jersey increased its minimum wage while neighboring Pennsylvania did not. Yet there was little change in employment.

When I discuss their work in my economics classes, however, I don’t portray it as an example of economists providing a definitive answer to the question of whether minimum wage hikes kill jobs. Instead, I challenge my students to think about all the ways one could answer this question, which clearly cannot be settled based on our beliefs. But rather, the answer requires data – which in economics, can be hard to come by.

Economics studies the production, distribution and consumption of goods and services. And so, like other social sciences, economics is fundamentally interested in human behavior.

But humans behave in a wide variety of often hard-to-predict ways, with countless complications. As a result, economists rely on abstraction and theory to create models in hopes of representing and explaining the complex world that they are studying. This emphasis on complicated mathematical models, theory and abstraction has made economics a lot less accessible to the general public than other social sciences, such as psychology or sociology.

Economists also use these models to answer important questions, such as “Does a minimum wage cause unemployment?” In fact, this is one of the most studied questions in all of economics since at least 1912, when Massachusetts became the first state to create a minimum wage. The federal wage floor came in 1938 with the passage of the Fair Labor Standards Act.

And it’s been controversial ever since. Proponents argue that a higher minimum wage helps create jobs, grow the economy, fight poverty and reduce wage inequality.

Critics stress that minimum wages cause unemployment, hurt the economy and actually harm the low-income people that were supposed to be helped.

A tale of two theories

Most students in my introductory microeconomics class can easily show, using the standard supply and demand model, that an increase in the minimum wage above the level that the market sets on its own should drive up unemployment. In fact, this is one of the most commonly used examples in introductory economics textbooks.

However, this result assumes a perfectly competitive labor market in which workers and employers are abundant and employees can change jobs with ease. This is rarely the case in the real world, where a few companies frequently dominate in what are known as monopsonies.

And so others theorized that because monopsonistic companies had the power to set wages artificially low, a higher minimum wage could, perhaps counterintuitively, prompt companies to hire more workers in order to recover some of their lost profitability as a result of the increased labor costs.

How can economists tell which of these two theories may be right? They need data.

Studying the real world is difficult, and it’s constantly changing, so it is not easy to obtain all the relevant evidence.

Unlike in medicine or other sciences, economists cannot conduct rigidly controlled clinical trials, a method vacinologists used to test the efficacy of COVID-19 vaccines. Due to financial, ethical or practical constraints, we cannot easily split people into treatment or control groups – as is common in psychology. And we cannot randomly assign a higher minimum wage to some and not others and observe what will happen, which is how a biomedical scientist might study the impact of various treatments on human health.

And in studying the minimum wage, we cannot simply look at past times when it was increased and check what happened to unemployment a few weeks or months later. There are many other factors that affect the labor market, such as outsourcing and immigration, and it’s virtually impossible to isolate and pin down one factor such as a minimum wage hike as the cause.

This is where the pioneering work of natural experiments like the ones Card and Krueger have used over the years to study the effects of raising the minimum wage and other policy changes comes in. It began with their 1994 paper, but they’ve replicated the findings with other studies that have deepened the amount of data that shows the original theory about the minimum wage causing job losses is likely wrong.

Their approach isn’t without flaws – mostly technical ones –- and in fact economists still don’t have a clear answer to the question about the minimum wage that I posed earlier in this article. But because of Card, Krueger and their research, the debate over the minimum wage has gotten a lot less theoretical and much more empirical.

Only by studying how humans actually behave can economics hope to make meaningful predictions about how a policy change like increasing the minimum wage is likely to affect the behavior of the economy and the people living in it.

This article is republished from The Conversation under a Creative Commons license. Read the original article here: https://theconversation.com/does-raising-the-minimum-wage-kill-jobs-the-centurylong-search-for-the-elusive-answer-shows-why-economics-is-so-difficult-but-data-sure-helps-157575.