The company's lab chief testified that he was besieged by complaints from doctors about inaccurate tests. 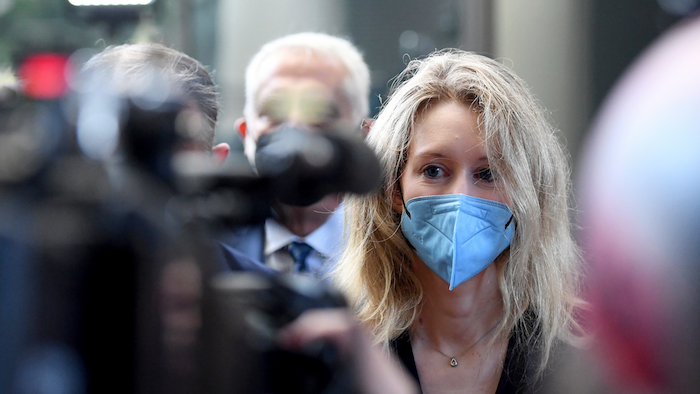 The revelations emerged during the eighth day of a high-profile trial revolving around allegations Holmes duped investors, customers and unwitting patients as CEO of Theranos, a company she founded after dropping out of college in 2003 when she was 19.

Holmes briefly became a Silicon Valley sensation while peddling the premise she had invented a breakthrough technology scan for an array of health problems using just a few drops of blood taken with a finger prick.

But Adam Rosendorff, a medical doctor who oversaw Theranos' clinical laboratory from September 2013 through November 2014, drew a darker picture Tuesday while testifying as witness for the federal government prosecutors trying to convince a jury to convict Holmes on 12 counts of fraud.

Holmes, 37, has pleaded innocent, maintaining she poured nearly 15 years of her life pursuing a great idea that simply didn't pan out. She could be sentenced to 20 years in prison if convicted.

Rosendorff insisted that he repeatedly tried to warn Holmes and Theranos' chief operating officer and Holmes' former lover, Ramesh “Sunny" Balwani, that the tests were so rampantly inaccurate that he was being besieged by complaints from doctors.

But Holmes and Balwani seemed more interested in cultivating Theranos' image as a potentially game-changing company than protecting people's health, according to Rosendorff.

“The number and severity of issues had reached a crescendo," Rosendorff testified in the San Jose, California, courtroom, explaining why he decided to leave Theranos rather than risk breaking his oath as a doctor to “do no harm." He said he was so appalled that he refused to shake Balwani's extended hand when he finally left Theranos.

Prosecutors also displayed a series of text messages exchanged between Holmes and Balwani, attempting to prove they were more interested in pursuing fame and fortune than protecting people's health.

At the same time Rosendorff was raising objections about Theranos' blood-testing technology, Holmes sent at text to Balwani to let him know that she had completed deals securing about $150 million from Murdoch and the Walton family, which is behind Walmart.

Just a few weeks after Rosendorff left Theranos in protest, Holmes texted Balwani in December 2014 to share her optimism about the upcoming new year.

“This year is our year," Holmes texted Balwani. “We can never forget that tiger."

Holmes, who is now married to a different man, has accused Balwani of inflicting “intimate partner abuse," that affected some of her actions and statements while she was running Theranos. Balwani's lawyer has vehemently denied those allegations. Balwani is also facing fraud charges in a separate trial scheduled to begin next year.

The year 2015, however, turned out to be the beginning of the end for Theranos.

In October of that year, The Wall Street Journal published a series of explosive articles that exposed flaws with Theranos' technology and triggered government investigations that led to the company's downfall and led to the current trial. Rosendorff testified that he was among the sources who provided information for those articles.

The Wall Street Journal is owned by Murdoch, who is on the government's list of witnesses to be called to testify during a trial scheduled to continue through mid-December.

One of Holmes' lawyers, Lance Wade, attempted to poke holes in Rosendorff's testimony by pointing to several meetings he held with federal prosecutors and other government officials before taking the stand. Wade noted some discrepancies between Rosendorff’s statements during the trial and other sworn testimony he has given in other civil lawsuits brought against Theranos.

“I endeavored earnestly to fulfill my obligations as a lab director," Rosendorff maintained while Wade questioned his motives.

Rosendorff is scheduled to return to the witness stand Wednesday when the trial resumes.