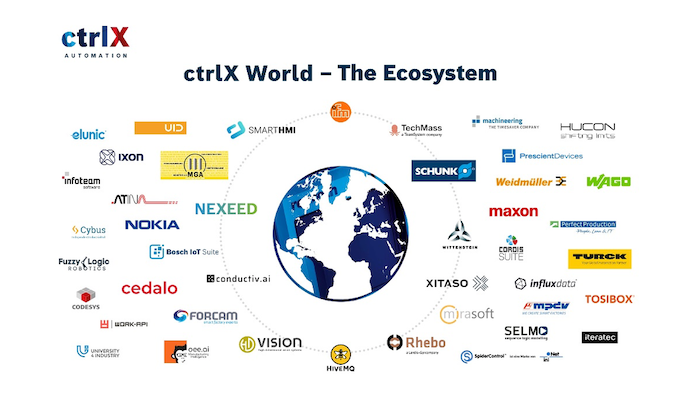 More than 300 companies are currently implementing ctrlX AUTOMATION in their applications and 43 ecosystem partners are already on board and published in ctrlx World.
Bosch Rexroth

Supplier of drive and control technologies Bosch Rexroth continues to make advancements with its ctrlX App Store and Digital Services.

Most recently, it created new capabilities with ctrlX AUTOMATION Digital Services, including the ctrlX ecosystem and ctrlX App Store, that put an emphasis on improving time-to-market with faster and more innovative machine designs.

Launched in 2019, Bosch Rexroth’s ctrlX AUTOMATION machine control system sought to take complicated tasks and create easily implemented and straightforward solutions. It also intentionally appealed to the new generation of engineers and software developers who desire to use technologies and tools generally considered the standard outside the industry.

The foundational idea was similar to that of a smartphone: a user-friendly platform based on apps.

Two years later and with co-creation on its mind, Bosch Rexroth introduced ctrlX World to construct an industrial ecosystem. More than 300 companies are currently implementing ctrlX AUTOMATION in their applications and 43 ecosystem partners are already on board and published in ctrlx World.

Customers can purchase apps in the ctrlX Store, manage software licenses through the Bosch Rexroth Licensing Center and assign them to a ctrlX CORE unit. This works both for apps developed by Bosch Rexroth and for those from third-party providers.

As the evolution of products is driven by consumer trends, ctrlX AUTOMATION works with machine builders to understand consumer demand.

Bosch Rexroth wanted to improve time-to-market while also opening the door for customization and innovation as everyone fought to be first.

“We are about making it expeditious, but the customization in any industry is always there,” Cameron said in a media briefing. “People expect modularity and they want to innovate to differentiate from competitors.

“You have the ability to use Bosch Rexroth supplied apps and functional technical processes that happen on a machine. There is a whole offering of environments to program, freedom of language and design approach. You can use what’s familiar and comfortable. It translates to efficiency and speed.”