And things are likely to get worse, but they have a $16 billion plan. 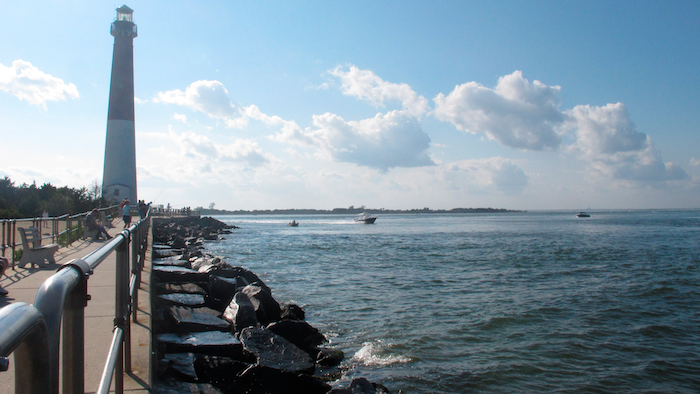 This Sept. 18, 2021 photo shows the Barnegat Inlet in Barnegat Light N.J. where a storm gate would be constructed across the inlet as part of a $16 billion storm control project being proposed by the U.S. Army Corps of Engineers. A public hearing on the proposal was to be held on Tuesday, Sept. 21.
AP Photo/Wayne Parry

BARNEGAT LIGHT, N.J. (AP) — Federal officials on Tuesday warned of a “dire” situation that is likely to get worse as they explained details of a $16 billion plan to lessen back bay flooding, one of the major sources of storm damage at the Jersey Shore.

At an online public hearing, officials with the U.S. Army Corps of Engineers answered questions on flooding impacts, environmental effects, navigation and other concerns, even as they acknowledged they don't yet have all the answers.

The proposal calls for construction of huge gates across the mouths of three inlets in New Jersey that could be slammed shut when major storms approach, closable barriers that would cut parts of two bays in half and the elevation of nearly 19,000 homes.

Back bay flooding refers to floods that are not primarily caused by waves crashing over ocean barriers, but by stealthily rising water levels in bays along inland shorelines.

“Things are dire, and things could become worse with sea level rise and increased frequency and severity of storms,” said Jay Smith, the project manager for the Army Corps.

But officials did not yet have detailed answers on some concerns, particularly environmental ones, noting that the project, which is one of the most ambitious and expensive flood control efforts any U.S. state has yet taken to address back bay flooding, is still in the planning stages.

Stan Hales, director of the Barnegat Bay Partnership at Ocean County College in Toms River, asked why managed retreat — buying at-risk homes near the water and relocating their occupants to safer spots inland — was not a main part of the study.

Smith said that topic will be considered as part of land acquisition costs that may be needed for the project.

Bill Dixon, director of coastal engineering with the New Jersey Department of Environmental Protection, said it is “too early to tell” if eminent domain, the court-sanctioned confiscation of private property after fair compensation is paid, may be needed for the project.

“Whether or not eminent domain is required is dependent on whether we can get the property donated to us,” he said.

Army Corps officials said construction of new protective sand dunes may be needed in some areas that do not currently have them if the project is built.

In response to a question about possible impact on property values, Preston Oakley, an economist with the Army Corps, said he expects the flood barriers would actually improve real estate values nearby because they would be better protected from major flooding.

Although ocean waves caused severe damage during Superstorm Sandy in 2012, back bay flooding also caused extensive damage in that storm. In numerous places, it was the primary source of property damage during Sandy.

It also would change the way several iconic spots at the Jersey Shore would look and operate.

It calls for large storm gates across the Manasquan, Barnegat and Great Egg Harbor inlets. In addition, so-called “cross-bay barriers” would be erected in Absecon Bay near Atlantic City and along a former railroad right of way that would extend along 52nd Street in Ocean City.

These bay barriers would have a swing gate in the middle that could be shut during major storms, and slat-like gates spanning about a third of a mile that would be lowered down into the water to block surges of water during storms.

The plans announced last month by the U.S. Army Corps of Engineers and the state Department of Environmental Protection are just that: plans. There is no guarantee of funding for the massive project, which would run from Neptune in Monmouth County all the way to the state’s southern tip in Cape May.