The tanker was caught with about 4,600 tons of waste oil without port clearance and other proper legal documents. 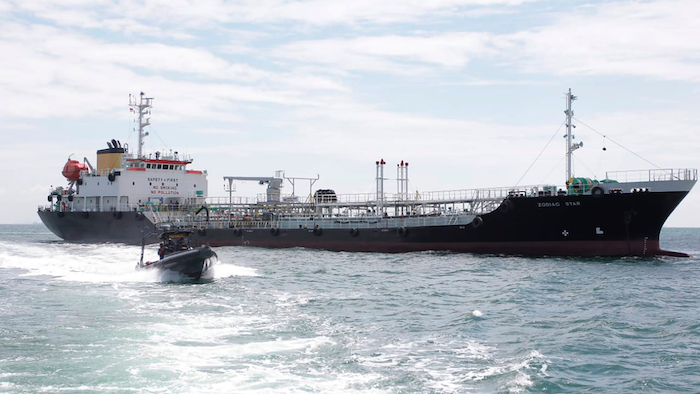 In this undated photo released by Indonesian Navy, a navy boat sails past Panamanian-flagged tanker MT Zodiac Star anchored in Riau Island waters, Indonesia. Indonesian navy seized the massive tanker believed to be loaded with thousands of tons of wasted black oil and has brought the ship to shore for further investigation, officials said Thursday, Sept. 2, 2021.
Indonesian Navy via AP

JAKARTA, Indonesia (AP) — Indonesia's navy has seized a massive tanker believed to be loaded with thousands of tons of wasted black oil and has brought the ship to shore for further investigation, officials said Thursday.

The Panamanian-flagged MT Zodiac Star was located Wednesday after the navy received an intelligence tip about a suspicious tanker near Tolop island and escorted it about 22 kilometers (13 miles) to a naval base in Batam on the Indonesian archipelago’s southwestern tip near Singapore, said Rear Admiral Arsyad Abdullah, the country’s western fleet commander.

The 3,224-ton tanker, with its crew of 18 Indonesians and a Malaysian, was suspected of conducting illicit practices after it was caught with about 4,600 tons of waste oil without port clearance and other proper legal documents, Abdullah said in a statement.

He said investigators are still consulting with experts and questioning the tanker's captain, crew members and witnesses before the findings are handed over to the prosecutor’s office. The charges that could be brought carry up to 5 years in prison and fine of 600 million rupiahs ($42,000), Abdullah said.

In late July, the Indonesian navy seized the Bahamas-flagged oil tanker MT Strovolos and arrested its captain and 18 crew after Cambodia accused the ship of stealing nearly 300,000 barrels of crude oil.

An Iranian-flagged tanker and a Panamanian-flagged tanker were seized in January on suspicion of illegally transferring oil in Indonesian waters. They were released after a four-month detention and paid 2 billion rupiah (nearly $140,000) for spilling oil into the sea, according to a verdict from a court on Batam island.