In the audio, a crew member can be heard saying five or six armed Iranians boarded the tanker. 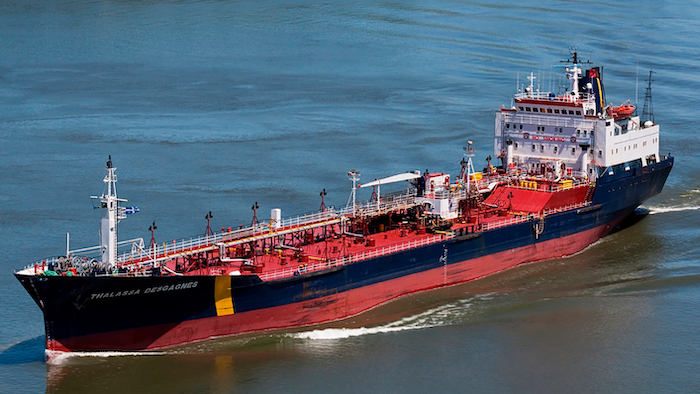 In this June 14, 2012 photo, the ship that would later become the Asphalt Princess sails through Quebec City, Canada. The hijackers who captured the Asphalt Princess off the coast of the United Arab Emirates in the Gulf of Oman departed the targeted ship on Wednesday, Aug. 4, 2021, the British navy reported, as recorded radio traffic appeared to reveal a crew member onboard saying Iranian gunmen had stormed the asphalt tanker.
Steve Geronazzo via AP

FUJAIRAH, United Arab Emirates (AP) — The hijackers who captured a vessel off the United Arab Emirates in the Gulf of Oman left the ship Wednesday, the British navy reported, as radio traffic appeared to reveal a crew member onboard saying Iranian gunmen had stormed the asphalt tanker.

The incident — described by the British military’s United Kingdom Maritime Trade Operations the night before as a “potential hijack" — revived fears of an escalation in Mideast waters and ended with as much mystery as it began.

Hints of what unfolded on the Panama-flagged Asphalt Princess emerged with a maritime radio recording obtained by commodities pricing firm Argus Media and shared with The Associated Press. In the audio, a crew member can be heard telling the Emirati coast guard that five or six armed Iranians had boarded the tanker.

“Iranian people are onboard with ammunition,” the crew member says. “We are … now, drifting. We cannot tell you exact our ETA to (get to) Sohar,” the port in Oman listed on the vessel’s tracker as its destination. It was not clear whether the crew members, whom he identified as Indian and Indonesian, were in danger at the time of the recording.

No one took responsibility for the brief seizure, which underscored mounting tensions as Iran and the United States seek a resolution to their standoff over Tehran's tattered 2015 nuclear deal with world powers.

In an apparent response, Iranian Foreign Ministry spokesman Saeed Khatibzadeh on Tuesday denied that Iran played any role. He described the recent maritime attacks in the Persian Gulf as “completely suspicious.”

The rising tensions have played out in the waters of the Persian Gulf, where just last week a drone attack on an oil tanker linked to an Israeli billionaire off the coast of Oman killed two crew members. The West blamed Iran for the raid, which marked the first known fatal assault in the shadow war targeting vessels in Mideast waters. Iran denied involvement.

Late on Tuesday, the intruders boarded the Asphalt Princess sailing off the coast of Fujairah, authorities said. The official news agency of Oman’s military said it received reports that the Asphalt Princess had been hijacked and immediately dispatched Royal Air Force maritime patrol aircraft and naval vessels “to contribute to securing international waters.”

In the recorded radio traffic, when the Emirati coast guard asks the crew member what the Iranian gunmen were doing onboard, he says he “cannot understand the (Iranians),” his voice muffled, before trying to hand over the radio to someone else. The call then cuts off.

Speaking from Washington, State Department spokesman Ned Price said that American officials also “believe that these personnel were Iranian, but we’re not in a position to confirm this at this time.”

Possible signs of trouble began to emerge that evening when six oil tankers off the coast of Fujairah announced around the same time via their Automatic Identification System trackers that they were “not under command,” according to MarineTraffic.com. That typically means a vessel has lost power and can no longer steer.

Satellite-tracking data had showed the Asphalt Princess gradually heading toward Iranian waters off the port of Jask early Wednesday, according to MarineTraffic.com. Hours later, however, it stopped and changed course toward Oman, just before the British navy group declared the hijackers had departed and the vessel was “safe.”

In an analysis, maritime intelligence firm Dryad Global described the seizure of the Asphalt Princess as the latest Iranian response to outside pressures, economic conflicts and other grievances.

“Iran has consistently shown that in conducting this kind of operation, it is calculated in doing so, both by targeting vessels directly connected with ongoing disputes and (vessels) operating within the ‘grey space’ of legitimacy,” which may be involved in illicit trade, Dryad Global said.

The owner of the Asphalt Princess, listed as Emirati free zone-based Glory International, could not be reached for comment.

The U.S. military’s Mideast-based 5th Fleet and the British Defense Ministry also did not respond to requests for comment. The Emirati government did not acknowledge the incident.

The Gulf of Oman sits near the Strait of Hormuz, the narrow mouth of the Persian Gulf through which a fifth of all traded oil passes. Fujairah, on the UAE’s eastern coast, is a main port in the region for ships to take on new oil cargo, pick up supplies or trade out crew.

For the past two years, after then-President Donald Trump withdrew the U.S. from Iran's nuclear deal and imposed crushing sanctions, the waters off Fujairah have witnessed a series of explosions and hijackings. The U.S. Navy has blamed Iran for a series of limpet mine attacks on vessels that damaged tankers.

In 2019, Iran's Revolutionary Guard detained a British-flagged tanker, the Stena Impero, near the Strait of Hormuz. Last year, an oil tanker sought by the U.S. for allegedly circumventing sanctions on Iran was hijacked off the Emirati coast and later ended up in Iran, though Tehran never acknowledged the incident.

And in January, armed Iranian Revolutionary Guard troops stormed a South Korean tanker and forced the ship to change course and travel to Iran. While Iran claimed it detained the ship over pollution concerns, it appeared to link the seizure to negotiations over billions of dollars in Iranian assets frozen in South Korean banks.

Last week's attack on the oil tanker Mercer Street off Oman, killing two, has drawn criticism from the U.S., the United Kingdom and Israel. Israel has launched a diplomatic effort at the United Nations over the attack. Meanwhile, U.S. Secretary of State Antony Blinken spoke with British Foreign Secretary Dominic Raab on Wednesday about the attack.

Blinken and Raab spoke about “ongoing efforts to forge a coordinated response to Iran’s attack,” according to the State Department. Raab stressed on Twitter the “need for Iran to stop its destabilising behavior.”