Thrusters fired shortly after the arrival of a new module, making the orbiting outpost slowly spin. 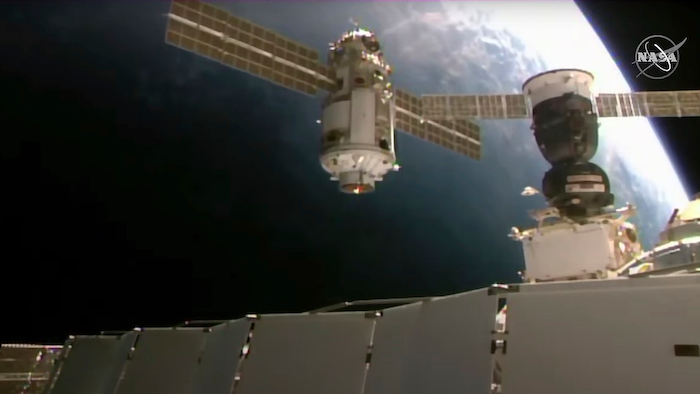 MOSCOW (AP) — Space engineers will analyze whether a glitch that caused the International Space Station to spin out of its normal orientation could have impacted any of its systems, a Russian space official said Wednesday.

Sergei Krikalev, the director of crewed space programs at the Russian space corporation Roscosmos, emphasized that last week's incident did not inflict any observable damage to the space station, but he said that experts would need to study its potential implications.

“It appears there is no damage,” Krikalev said in an interview broadcast by Russian state television. "But it’s up to specialists to assess how we have stressed the station and what the consequences are.”

Thrusters on Russia's Nauka laboratory module fired shortly after the module arrived at the International Space Station on Thursday, making the orbiting outpost slowly spin about one-and-a-half revolutions. Russia's mission controllers fired thrusters on another Russian module and a Russian cargo ship attached to the space station to stop rotation and then push the station back to its normal position.

Both U.S. and Russian space officials said the station's seven-person crew wasn't in danger during the incident.

The station needs to be properly aligned to get the maximum power from solar panels and to maintain communications with space support teams back on Earth. The space station’s communications with ground controllers blipped out twice for a few minutes on Thursday.

NASA said in a tweet Tuesday that the station was 45 degrees out of alignment when Nauka’s thrusters were still firing and loss of control was discussed with the crew.

Roscosmos' Krikalev, a veteran of six space missions who spent a total of 803 days in orbit, noted Wednesday that firing orientation engines created a dynamic load on the station's components, making a thorough analysis of whether some of them could be overstressed necessary.

“The station is a rather delicate structure, and both the Russian and the U.S. segments are built as light as possible,” he said. "An additional load stresses the drivers of solar batteries and the frames they are mounted on. Specialists will analyze the consequences, and it is too early to talk about how serious it was, but it was an unforeseen situation that requires a detailed study.”

Krikalev said Nauka's engines fired because a glitch in the control system mistakenly assumed that the lab module hadn't yet docked at the station and activated the thrusters to pull it away.

The launch of the 22-ton (20-metric-ton) module has been repeatedly delayed by technical problems. It was initially scheduled to go up in 2007, but funding problems pushed the launch back, and in 2013 experts found contamination in its fuel system, resulting in a long and costly replacement. Other Nauka systems also underwent modernization or repairs.

Nauka is the first new compartment for the Russian segment of the International Space Station since 2010, offering more space for scientific experiments and room for the crew. Russian crew members will have to conduct up to 11 spacewalks beginning in early September to prepare it for operation.

In 1998, Russia launched the station’s first compartment, Zarya, which was followed in 2000 by another big piece, Zvezda, and three smaller modules in the following years. The last of them, Rassvet, arrived at the station in 2010.