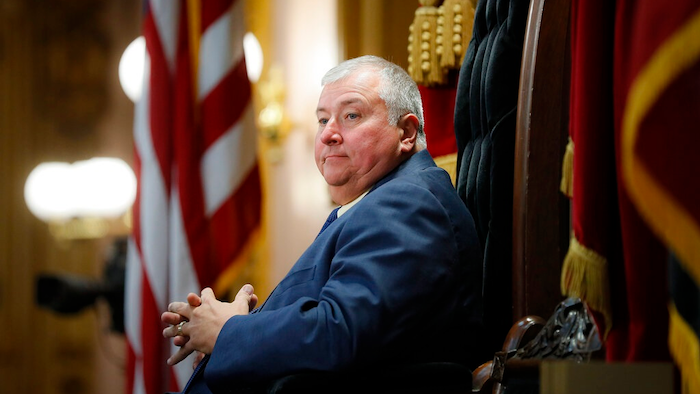 In this Wednesday, Oct. 30, 2019, file photo, Republican Ohio state Rep. Larry Householder sits at the head of a legislative session as Speaker of the House, in Columbus. Householder is charged in a $60 million bribery case, alleging he helped a $1 billion nuclear plant bailout. The 2020 arrests of Householder and four associates in connection with the scheme have rocked politics and business across Ohio.
AP Photo/John Minchillo, File

CLEVELAND (AP) — One was a millionaire CEO of a large publicly traded utility looking for 11th-hour help to save two nuclear power plants that hung like millstones around the neck of his company’s bottom line.

The other was a former legislator seeking to restore his political power after more than a decade on the sidelines.

They shared similarities as well, both large men in size and personality, skilled at glad-handing and cajoling, and, when necessary, dealing with those who stood in their way.

Today, they share tattered careers and future worries as prosecutors continue to investigate former FirstEnergy Corp. CEO Chuck Jones’ involvement in a $60 million bribery scheme secretly funded by the company to win a $1 billion legislative bailout for the plants and potentially hundreds of millions more in annual revenue guarantees for its three Ohio electric companies.

Former House Speaker Larry Householder, who shepherded the bailout bill through the Legislature with FirstEnergy money, is now a political pariah facing a federal racketeering charge.

Jones was fired in October along with two senior vice presidents. Householder lost his speakership and later his House seat.

“This is likely the largest bribery, money laundering scheme ever perpetrated against the people of the state of Ohio,” then-U.S. Attorney David DeVillers said when the scheme was revealed last year. “This was bribery, plain and simple. This was a quid pro quo. This was pay to play.”

Prosecutors have accused Householder of benefiting from the scheme, using nearly a half million dollars of secret FirstEnergy money on his 2018 House campaign, toward his Florida home and on legal fees.

Householder appears to have readily embraced a plan audacious in both size and scope that worked to near perfection until the FBI and federal prosecutors intervened.

The two men began their courtship in 2017, with Householder accompanying FirstEnergy executives on a company plane to President Donald Trump’s inauguration.

Householder was selected speaker in January 2019 thanks to supportive legislators elected the previous year using millions in hidden FirstEnergy dollars. The campaign help was funneled through dark money groups not required to disclose their donors.

The nuclear bailout and revenue guarantee was approved by the Legislature that July and was immediately signed into law. Around $38 million in FirstEnergy money was spent to keep a referendum sought by opponents of the bill off the ballot.

The Legislature has since repealed the nuclear plant portion of the legislation while FirstEnergy agreed to no longer collect the revenue guarantee in a settlement with Ohio Attorney General Dave Yost.

The scheme was disassembled further last week when Jones’ successor at FirstEnergy signed a “statement of facts” laying out in granular detail Jones’ and Householder’s roles as the company sought to avoid prosecution on a federal conspiracy charge.

The statement of facts signed by FirstEnergy CEO and President Steven Strah was attached to an agreement that called for the company to pay $230 million in penalties and abide by a long list of provisions that, if adhered to, would make the criminal charge go away in three years.

FirstEnergy officials, including Strah, have said the company has taken numerous reform measures in the last year, including a review of its political donations, political giving and use of dark money groups.

The document narrates how Jones and unidentified “Executive 2,” one of two senior vice presidents also fired, interacted with Householder to get the deal done.

Soon after the inauguration trip, FirstEnergy made four $250,000 payments to a dark money group Householder controlled.

Absent Householder, who had not yet regained his House seat, the company tried through three pieces of legislation in 2017 to bail out the nuclear plants. The company in March 2018 announced its intention to close the two plants as soon as 2020 while the company’s wholly owned subsidiary that operated them filed for bankruptcy the same month.

The statement of facts shows how Jones and “Executive 2” kept tabs on Householder.

On the day after the 2018 general election, Jones texted Householder asking, “How did your candidates do?”

On the day Householder’s colleagues appointed him speaker, Householder texted Jones saying, “thank you for everything, it was historical.”

On April 23, 2019, a day when opponents testified against the bailout bill at a House committee hearing, Executive 2 texted Jones to tell him the session was lengthy and went as expected. “Tell (Householder) to put his big boy pants on. Ha.”

The bill that was eventually passed gave the nuclear plants $150 million a year for six years. The statement of facts showed FirstEnergy executives were lobbying for 10 years of subsidies along with the revenue guarantee.

The Legislature approved the bailout bill the following month, Jones in a text to other FirstEnergy executives said: “We made a bbiiiiiiig bet and it paid off. Actually 2 big bets. Congrats to you and the entire team!”

On Sept. 4, 2019, as bailout opponents began gearing up for a petition drive to get a referendum on the ballot, Executive 2 told Jones in a text that he would be taking steps to convince another Ohio public official to call the bailout bill a tax that couldn’t be subject to a ballot referendum.

“We should check with (Householder) to make sure he’s on board before we step in,” Jones responded. "He seemed pretty confident in his referendum strategy and plans to pass it as a tax in a new bill if they get enough signatures.”

Federal authorities have said FirstEnergy spent around $38 million on a dirty-tricks campaign that included spurious ads claiming China and other “foreign entities were taking over Ohio’s electric grid.”

The last substantive interactions between Householder and FirstEnergy executives that have been made public occurred in early 2020, when the company provided $2 million to his dark money group to finance a failed effort for passing at a constitutional amendment to change legislative term limits and potentially allow him to remain in power another 16 years.

Jones and Householder have vehemently denied any wrongdoing.