It is hardly the official federal minimum wage, but for many lower-skilled workers, $15 an hour has increasingly become a reality. 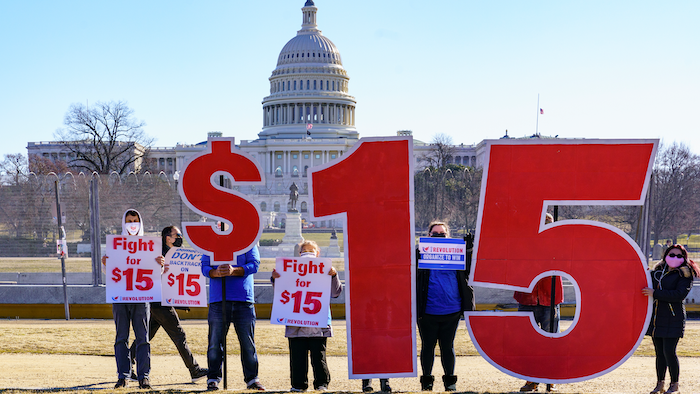 WASHINGTON (AP) — The signs and banners are dotted along suburban commercial strips and hanging in shop windows and restaurants, evidence of a new desperation among America's service-industry employers: “Now Hiring, $15 an hour.”

It is hardly the official federal minimum wage — at $7.25, that level hasn't been raised since 2009 — but for many lower-skilled workers, $15 an hour has increasingly become a reality.

Businesses, particularly in the restaurant, retail and travel industries, have been offering a $15 wage to try to fill enough jobs to meet surging demand from consumers, millions of whom are now spending freely after a year in lockdown. And many of the unemployed, buoyed by stimulus checks and expanded jobless aid, feel able to hold out for higher pay.

The change since the pandemic has been swift. For years, and notably in the 2020 presidential race, labor advocates had trumpeted $15 an hour as a wage that would finally allow low-paid workers to afford basic necessities and narrow inequality. It struck many as a long-term goal.

Now, many staffing companies say $15 an hour is the level that many businesses must pay to fill their jobs.

“That number is not a coincidence,” said Aaron Sojourner, an economist at the University of Minnesota. “It’s the number that those activists and workers put on the table 10 years ago, and built a movement towards.”

Even so, millions of Americans are still earning less than $15 an hour. The nonpartisan Congressional Budget Office calculates that even by 2025, roughly 17 million workers will remain below that level.

Yet at ZipRecruiter, the number of job postings on the site that are advertising $15 an hour has more than doubled since 2019, said Julia Pollak, labor economist for the company. The proportion of jobs that offer 401(k) retirement accounts, flexible scheduling, signing bonuses and other benefits has risen, too. 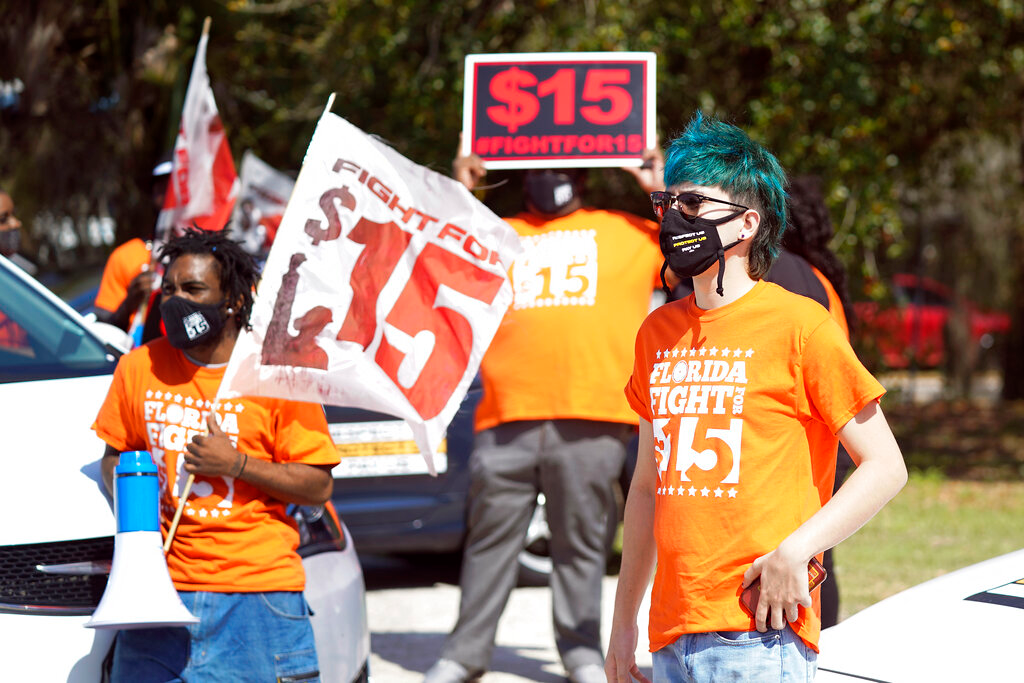 Cristian Cardona, right, an employee at a McDonald's, attends a rally for a $15 an hour minimum wage on Feb. 16 in Orlando, FL.AP Photo/John Raoux

The beneficiaries are people like Maggie Himmel, who started working at the Flowers for Dreams flower shop in Milwaukee last fall for $12.50 an hour. In January, the company raised its minimum wage to $15.

The higher pay allowed Himmel, 22, to move into her own apartment after sharing living space with her sister. She is earning more than she did before the pandemic, when she worked part time at a flower shop in Kalamazoo, Michigan, for about $11 an hour.

“Moving out on my own was a huge goal for me,” she said. “I was so happy to get that news.”

Steven Dyme, the owner of Flowers for Dreams, said the $15 minimum made it much easier for him to staff up once the economy reopened this spring and demand for flowers, particularly for weddings, soared.

Dyme, whose company has four locations — one in Chicago, one in Milwaukee and two in Detroit — says he's fully staffed, with 80 full- and part-time workers.

At $15 an hour, he said, “I saw a markedly different picture in how fast we could recruit and in the experience level of workers.”

Mathieu Stevenson, the CEO of Snagajob, a site for hourly workers, says a handful of restaurant chains are going so far as to offer retirement plans — he calls it the “white collarization” of blue collar jobs — as benefits once reserved for professionals are being offered to some service workers.

“The $15 an hour debate," Stevenson said, “is essentially being resolved through market forces.”

Yet other trends have also helped drive the movement toward a $15 wage. The Fight for $15 labor movement has organized strikes by fast food workers and has lobbied states and cities for higher minimum wages. Thirty states and the District of Columbia have adopted wage floors that exceed the $7.25 federal minimum. Eleven states have passed laws that will lift their minimum wages to $15 over time. Among them is Florida, where voters last year approved a measure raising the minimum to $15 by 2026.

Other states on track to a $15 an hour wage floor include California, Illinois, New York and Virginia. Ben Zipperer, an economist at the liberal Economic Policy Institute, estimates that four in 10 workers live in states where the minimum is set to reach $15 in the coming years.

The National Employment Law Project, an advocacy group for low-income workers, calculates that 26 million people, or about 16% of workers, have received higher pay because of all the state and local minimum wage increases since 2012, though often to less than $15 an hour.

The $7.25-an-hour federal minimum wage has now gone the longest stretch without an increase since it was first introduced in July 2009. Labor Department data showed that last year, only about 250,000 people — fewer than 0.5% of all workers — earned that wage.

Many employers are having to pay more to keep up with larger companies, including Amazon, Costco and Target, that have announced their own pay raises to $15 or more. More recently, Under Armour, Southwest Airlines and Best Buy have adopted $15 wage floors.

Economic research has found that when a large company raises pay, nearby employers feel compelled to follow suit. A study led by Ellora Derenoncourt, a Princeton University economist, found that companies in local markets that compete with Amazon, Target or Walmart generally responded by matching their wage hikes dollar-for-dollar. Derenoncourt's research also found that when companies seek to match the pay offered by their large competitors, they often end up employing fewer people, though the impact is relatively small.

Some economists argue that a federal minimum wage increase to $15 an hour — more than double the current minimum — will cost jobs. The CBO, in its most recent assessment, said that it would mean 1.4 million fewer jobs by 2025. Yet the CBO also found that as many as 27 million people would receive pay increases.

One factor that's helping fuel higher wages is a change in outlook among many lower-paid workers, millions of whom were laid off when COVID-19 first erupted in the spring of 2020. Some who worked at grocery stores, restaurants or hotels now don't want to return to those jobs — at least at the same pay.

And three rounds of stimulus checks, plus a $300-a-week federal unemployment benefit, have made it easier for them to turn down jobs that don't pay enough. Pollak, at ZipRecruiter, notes that with the extra unemployment benefit, jobless aid on average pays about $625 a week — equivalent to about $15 an hour.

That's likely a big reason why a March survey by the Federal Reserve Bank of New York found that workers without a college degree have raised the minimum pay they expect from a job by a whopping 26% from a year earlier.

Economists are uncertain whether or how long hefty pay gains will last. But many predict that when the $300 federal benefit for the unemployed expires in September, schools reopen, and more mothers return to work with their children in school full time, the influx of workers will make it easier to hire and reduce the pressure on employers to raise wages.

Nebraska is among the states that have stopped paying the $300 benefit and has reinstated requirements that jobless people document that they are searching for work. Greg Sulentic, who owns an Express Employment staffing agency franchise in Lincoln, Nebraska, said those steps have attracted more job-seekers but have hardly been a panacea. In the offices he oversees, there are still 1,300 jobs to be filled.

Sulentic said pay rates have jumped since the pandemic, with workers that made $10 to $11 an hour last year now getting $15 or $16.

“We’ve seen wage growth like we’ve never before seen in this industry, and I’ve been doing this for 25 years,” he said.

Some employers, he said, have been reluctant to increase pay, but “it’s been very difficult for those companies to hire on and retain employees.”