The Nauka module will provide more room for scientific experiments. 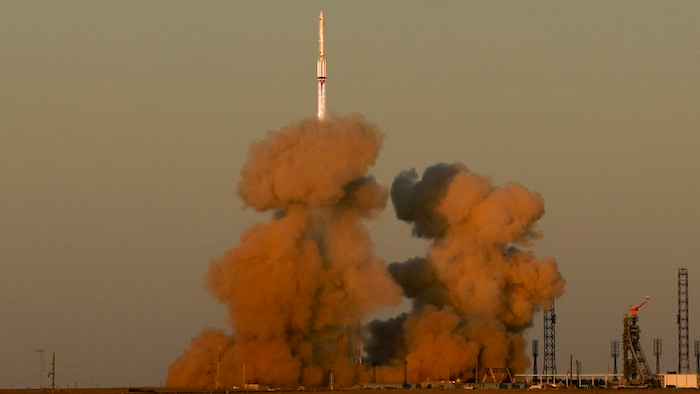 A Proton-M booster rocket carrying the Nauka module blasts off from the launch pad at Russia's space facility in Baikonur, Kazakhstan, July 21, 2021.
Roscosmos via AP

MOSCOW (AP) — Russia on Wednesday successfully launched a long-delayed lab module for the International Space Station that is intended to provide more room for scientific experiments and space for the crew.

A Proton-M booster rocket carrying the Nauka module lifted off as scheduled at 7:58 pm local time (14:58 GMT) from the Russian space launch facility in Baikonur, Kazakhstan. The navigational antennas and solar arrays deployed properly after a flawless launch that set the module on an eight-day journey to the orbiting outpost.

After a series of maneuvers, the 20-metric-ton (22-ton) module is set to dock at the International Space Station in automatic mode on July 29.

The launch of Nauka, also called the Multipurpose Laboratory Module, had been repeatedly delayed because of technical problems. It was initially scheduled to go up in 2007.

In 2013, experts found contamination in its fuel system, resulting in a long and costly replacement. Other Nauka systems also underwent modernization or repairs.

A launch previously set for July 15 was postponed until Wednesday due to the need to fix unspecified flaws.

Before Nauka docks at the station, one of the older Russian modules, the Pirs spacewalking compartment, will need to be removed and scrapped to free up room for the new module. Russian space controllers plan to perform the maneuver Friday after they check and confirm that Nauka’s systems operate properly and the module is ready for docking.

Russian crewmembers on the station have done two spacewalks to connect cables in preparation for Nauka’s arrival. Once Nauka docks at the station, it will require a long series of manuevers, including up to 11 spacewalks beginning in early September, to prepare it for operation.

In 1998, Russia launched the station’s first module, Zarya, which was followed in 2000 by another big module, Zvezda, and three smaller modules in the following years. The last of them, Rassvet, arrived at the station in 2010.