The chairman of Dawu Agriculture Group was arrested after trying to stop a state-owned enterprise from demolishing a company building. 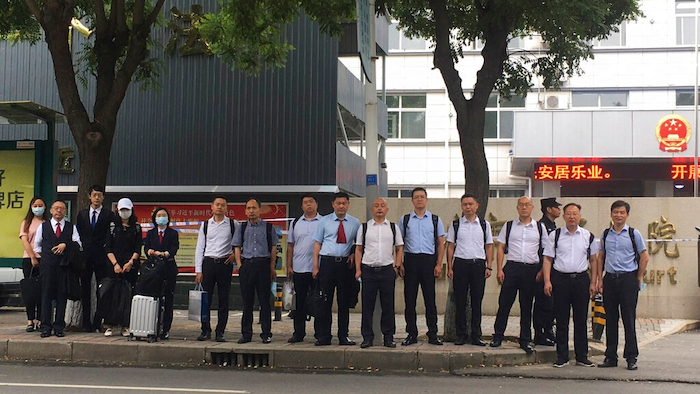 In this photo released by the defendants legal team, a team of lawyers for defendants on trial that included prominent Chinese pig farmer Sun Dawu stand outside the courthouse in Gaobeidian, in Northern China's Hebei province on Friday, 16 July 2021. The prominent Chinese pig farmer who was detained after praising lawyers during a crackdown on legal activists by President Xi Jinping's government went on trial Thursday, July 15, 2021 on charges including fighting with police and organizing a protest, defense lawyers said.
Defendants legal team via AP

BEIJING (AP) — A prominent Chinese pig farmer who was detained after praising lawyers during a crackdown on legal activists by President Xi Jinping’s government went on trial Thursday on charges including fighting with police and organizing a protest, defense lawyers said.

Sun Dawu, chairman of Dawu Agriculture Group, is among 20 defendants on trial in Gaobeidian, southwest of Beijing in Hebei province. They were detained after Dawu employees in August 2020 tried to stop a state-owned enterprise from demolishing a company building.

Sun said he is innocent, according to a written statement by defense lawyers. It said there were “great disputes” between them and prosecutors over evidence and the law but gave no details. It said the trial was due to resume Friday.

Phone calls to the court on Thursday weren't answered.

Sun became nationally known in 2003 when he was charged with “illegal fundraising” after soliciting investment for his business from friends and neighbors. The case prompted an outpouring of public support for Sun.

Since then, Sun has praised lawyers who help the public at a time when prominent legal figures have been imprisoned by Xi’s government. Sun’s lawyer in the 2003 case, Xu Zhiyong, disappeared in February 2020. Fellow activists say he was charged with treason.

In the latest case, Sun and other defendants are charged with fighting with police, organizing a protest, sabotaging production, obstructing public services, illegal mining, illegally occupying farmland and illegally taking public deposits, according to a copy of the charges given out by defense lawyers.

Sun was accused by police of “provoking quarrels,” a charge used against labor and other activists, when he was detained in August 2020.

Sun and the other defendants are “in generally poor health” after months in detention, according to the statement. It said two left court Thursday for medical treatment.

The trial officially is open to the public but only one spectator from the family of each defendant and 10 from the company were allowed due to anti-coronavirus restrictions, according to the statement.