The explosion could be heard for miles and blew out the windows and doors of nearby homes. 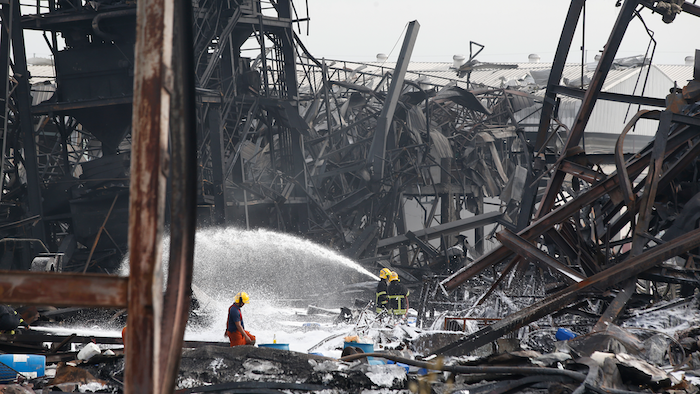 Firefighters spray foam amid twisted metal frames of a charred chemical factory Tuesday, July 6, 2021 in Samut Prakan, Thailand.Firefighters finally extinguished a blaze at a chemical factory just outside the Thai capital early Tuesday, more than 24-hours after it started with an explosion that damaged nearby homes and then let off a clouds of toxic smoke that prompted a widespread evacuation.
AP Photo/Anuthep Cheysakron

BANGKOK (AP) — Chemicals at a factory just outside the Thai capital burst back into flames briefly Tuesday, sending up another cloud of toxic black smoke and highlighting the continuing health danger from an industrial accident that killed one and injured dozens more.

Extinguishing the first blaze took more than 24 hours after it started with an explosion about 3 a.m. Monday that could be heard for kilometers (miles) and blew out the windows and doors of nearby homes.

Firefighters continued to douse the site with water and foam to keep the highly flammable chemical styrene monomer from reigniting, but flames broke out again and burned for about an hour Tuesday afternoon.

Little was left of the Ming Dih Chemical factory other than the twisted metal frames and charred remains of its warehouses that were destroyed in the explosion and fire. 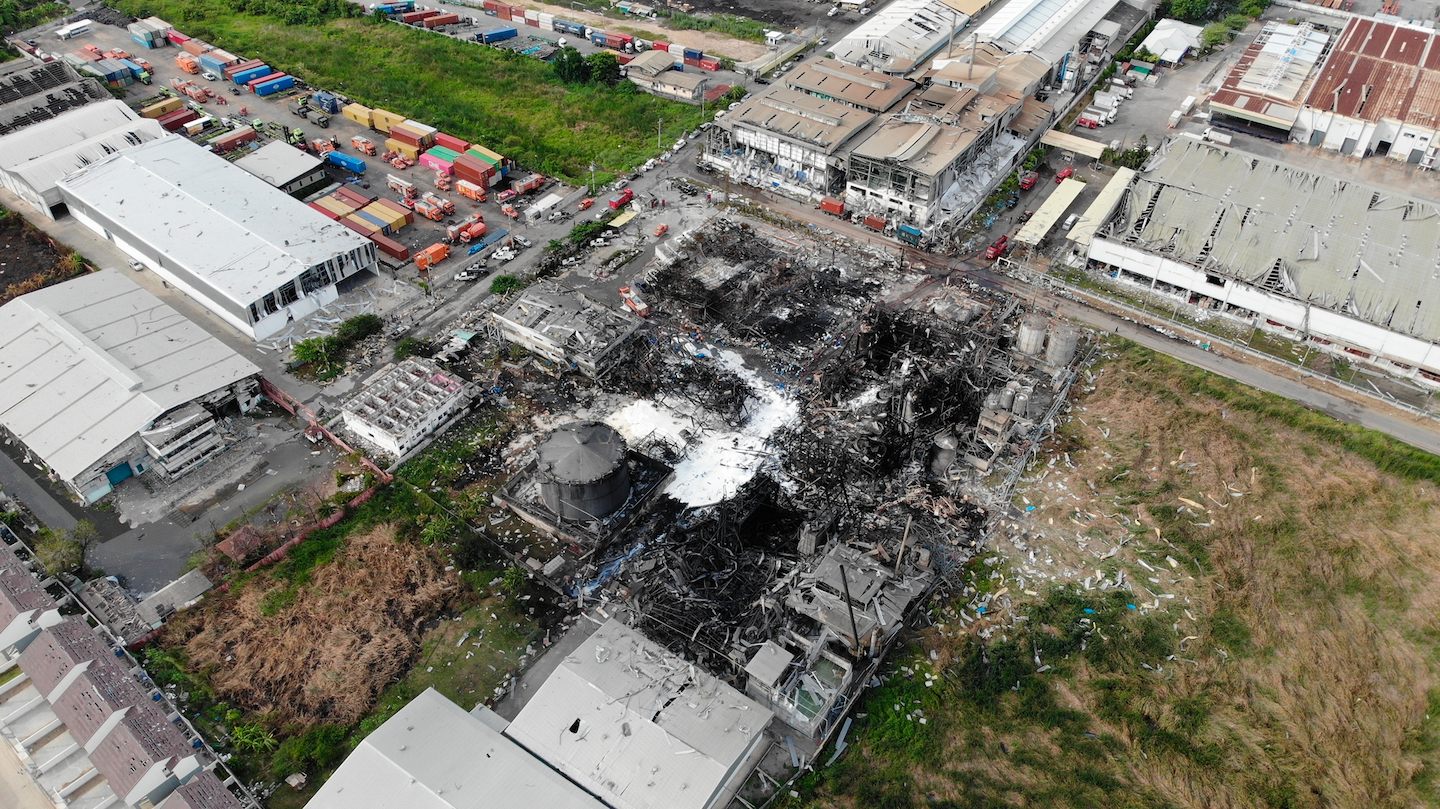 In this drone aerial photo provided by the Disaster Response Associations Thailand, twisted metal frames are all that remains of a burnt chemical factory Tuesday, July 6, 2021, in Samut Prakan, Thailand. Firefighters finally extinguished a blaze at a chemical factory just outside the Thai capital early Tuesday, more than 24-hours after it started with an explosion that damaged nearby homes and then let off a clouds of toxic smoke that prompted a widespread evacuation.Disaster Response Associations Thailand via AP

More than 60 people were injured in the disaster, including a dozen emergency responders, and more than 30 of them were hospitalized. An 18-year-old volunteer firefighter was killed in the blaze.

Police questioned the factory manager in their investigation of the cause of the explosion, who told them that he and eight staff members were woken from their sleep on the site by a strong chemical smell and fled just before the blast, said Maj. Gen. Chumpol Poompuang, the district's police commander.

Authorities ordered a 5-kilometer (3-mile) area around the foam and plastic pellet manufacturing factory, near Bangkok's main airport, evacuated as the factory burned, telling residents to avoid inhaling any fumes and warning that they could cause dizziness and vomiting, and cancer in the long term.

On Tuesday, Attapol Charoenchansa, who heads the country’s pollution control department, said teams were testing the air quality and water in the area of the factory, and were considering narrowing the evacuation zone to allow some residents to return home.

He cautioned, however, that rain which fell Tuesday afternoon could wash the chemicals into water sources, which would be difficult to control.

ASEAN Parliamentarians for Human Rights, a regional advocacy group, urged the Thai government to provide the public with more information on the chemicals that had been released, as well as all of its findings on possible contamination.

It also stressed that firefighters and others working at the scene, many of whom wore only the masks required by the government to prevent the spread of COVID-19 — or none at all — as they battled the blaze, had to be outfitted with better protective equipment during the cleanup.

“Now is the time to understand what the impacts of the fire and explosion might be, and ensure that all those still operating in the vicinity are adequately protected,” said group member and Philippine lawmaker Sarah Elago.

“Seeing firefighters with surgical masks fighting against potentially cancerogenic chemicals was an atrocious sight. The government should urgently provide adequate material for all those still at risk,” she said.

Prime Minister Prayuth Chan-ocha has ordered authorities to gather as much information as possible on contamination of soil, ground water, the city's drinking water and air so as to “mitigate the health impact in both the short and long term.”

“Although the fire is under control, our work has not yet been completed,” he said in a statement posted on Facebook.

Officials said shockwaves from the initial explosion damaged about 100 houses and 15 cars.

It wasn't clear how much monetary damage the fire caused to the factory.

Styrene monomer is used in the production of disposable foam plates, cups and other products, and can produce poisonous fumes when ignited.

The chemical itself also emits styrene gas, a neurotoxin, which can immobilize people within minutes of inhalation and can be fatal at high concentrations. Last year in the Indian city of Visakhapatnam, a leak of styrene gas from a chemical factory killed 12 people and sickened more than 1,000.

The area around the Thai factory is a mixture of older industrial complexes and newer housing developments that were built after the opening of Suvarnabhumi Airport in 2006.

A fire at another factory broke out Tuesday evening in eastern Bangkok, with no casualties reported, said Bangkok Gov. Aswin Kwanmuang. The cause of the fire at the Floral Manufacturing Group Co. in the Lat Krabang Industrial Estate was not immediately known.

It was put under control, though not totally extinguished, after several hours. No highly toxic chemicals were involved.

Veeris Ammarapala, governor of the Industrial Estate Authority of Thailand, was quoted by the Bangkok Post news site as saying the fire spread quickly because of the large quantities of alcohol on hand used in making perfumes, shampoo and hand sanitizer. He said his agency needs to review fire protection measures for industrial estates.