A Snapshot of the Bipartisan Infrastructure Deal

Here’s a look at where the $973 billion would go and what changes lawmakers would make to pay for the new spending. 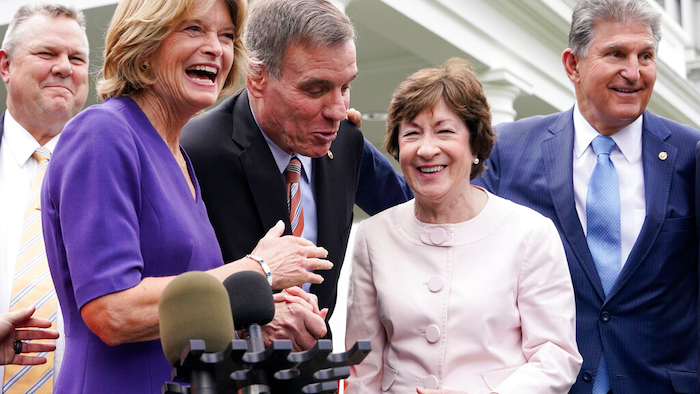 The White House says the agreement calls for about $579 billion in new spending over the next five years for roads, bridges, public transit and other public works. Add on what the federal government is currently projected to spend on those items, and the total comes to about $973 billion over five years.

Here’s a look at where those dollars would go and what changes lawmakers would make to pay for the new spending. 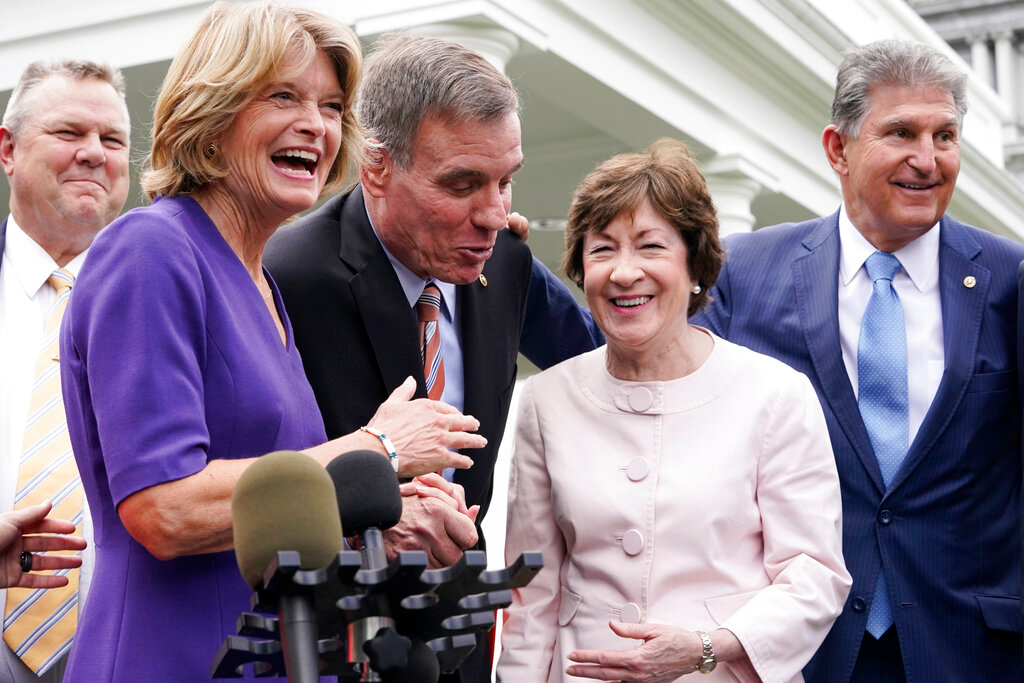 From left, Sen. Jon Tester, D-Mont., Sen. Lisa Murkowski, R-Alaska, Sen. Mark Warner, D-Va., Sen. Susan Collins, R-Maine, and Sen, Joe Manchin, D-W.Va., speak to the media after remarks by President Joe Biden on Thursday June 24, at the White House in Washington.AP Photo/Jacquelyn MartinThe agreement calls for a $109 billion boost for roads and bridges. It’s the biggest line item in the plan, but to put that in perspective, the American Society of Civil Engineers estimates that the country has a $786 billion backlog of road and bridge capital needs.

The next largest line items in the transportation arena are $66 billion for freight and passenger rail, $49 billion for public transit systems and $25 billion for airports. Biden regularly rode Amtrak between Washington and his home in Wilmington, Delaware, during his 36 years as a senator and has proposed a big increase in federal money for the rail service.

Supporters say that increased use of public transit and rail would reduce greenhouse gas emissions. To speed up the use of electric vehicles, the plan also calls for $7.5 billion for electric vehicle charging stations.

Along with transportation, the plan also looks to boost funding by about $73 billion for a broader network of transmission lines to deliver electricity from solar and wind power to homes and businesses across the county. There’s also $65 billion to enhance broadband access and $55 billion for improvements to the nation’s drinking water and wastewater systems.

Biden didn’t want to increase the user fees typically used to fund highways and transit, the federal gas and diesel tax. Republicans didn’t want to raise corporate taxes. The result was a scramble for cash. Lawmakers propose paying for the bill by pulling dollars from existing programs, cracking down on tax dodgers, auctioning spectrum for 5G services and at least one reliable stand-by for Congress, selling off some of the Strategic Petroleum Reserve.

Lawmakers, according to a document from Sen. Rob Portman, R-Ohio, are projecting that spending an additional $40 billion on the IRS would generate about $140 billion in additional federal revenue through audits and improved customer service. The agency was hit with budget cuts that began about a decade ago, shrinking the staff and the number of audits it performed.

Another big revenue raiser would come from clawing back unused COVID relief funds, $80 billion, plus recouping some of the supplemental unemployment insurance provided for in this year’s COVID relief bill, $25 billion. Dozens of states have rejected the $300 weekly benefit the federal government is temporarily providing, claiming that the payment stops people from returning to the workforce.

Lawmakers are also estimating they can raise $65 billion in spectrum auctions for 5G services and $72 billion by improving the integrity of the state unemployment insurance systems. Fraud perpetrators, sometimes in China, Nigeria or Russia, have bought stolen personal identifying information on the dark web and have flooded state unemployment systems with bogus claims.

This new white paper tells you the key inventory count challenges that companies are dealing with and shows you how to ease the pain using a unified, cloud ERP solution.
Jun 29th, 2021