The operation required the test pilot to fly 20 feet behind the refueling aircraft. 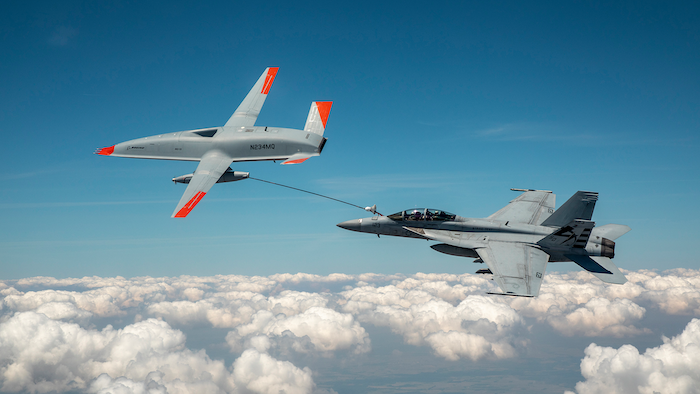 The Boeing MQ-25 T1 test asset transfers fuel to a U.S. Navy F/A-18 Super Hornet on June 4, marking the first time in history that an unmanned aircraft has refueled another aircraft. The MQ-25 Stingray will assume the carrier-based tanking role currently performed by F/A-18s, allowing for better use of the combat strike fighters and helping extend the range of the carrier air wing.
Photo by Kevin Flynn

ST. LOUIS - The U.S. Navy and Boeing demonstrated air-to-air refueling using an unmanned aircraft for the first time in history. The milestone occurred on June 4 when the Boeing-owned MQ-25™ T1 test asset refueled another aircraft.

The initial part of the flight required the F/A-18 test pilot to fly in close formation behind MQ-25 to ensure performance and stability prior to refueling. The maneuver required as little as 20 feet of separation between the MQ-25 T1 air vehicle and the F/A-18 refueling probe.

Both aircraft were flying at operationally relevant speeds and altitudes. With the evaluation safely completed, the MQ-25 drogue was extended, and the F/A-18 pilot moved in to "plug" with the unmanned aircraft and receive the scheduled fuel offload.

“This history-making event is a credit to our joint Boeing and Navy team that is all-in on delivering MQ-25's critical aerial refueling capability to the fleet as soon as possible,” Leanne Caret, president and CEO of Boeing Defense, Space & Security, said. “Their work is the driving force behind the safe and secure integration of unmanned systems in the immediate future of defense operations.”

MQ-25 T1 will continue flight testing prior to being shipped to Norfolk, Va. for deck-handling trials aboard a U.S. Navy carrier later this year.

MQ-25 is a trademark of the Department of the Navy. 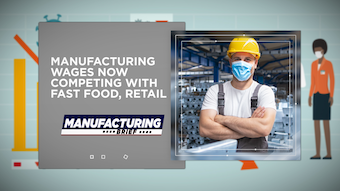 It's a big problem for the manufacturing industry.
Jun 23rd, 2021