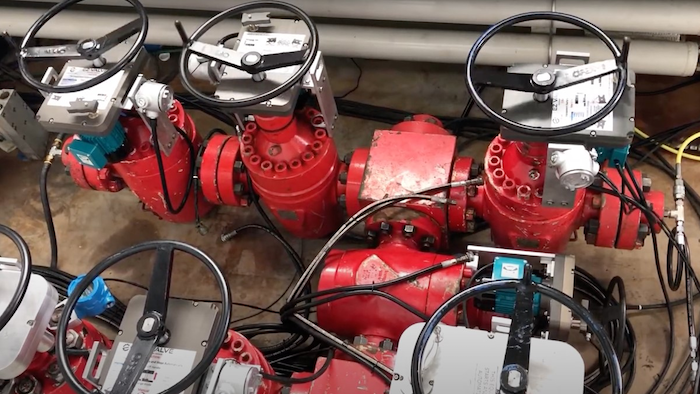 With Engenuity’s BOPX testing software, users can map out valve arrays and identify validation pressure limits for each component in the system. The EZ Valve retrofittable actuator (above) works with the BOPX test manager to add automated monitoring and control to manual valve arrays.

Engenuity, Inc. provides control automation and data integration solutions with a primary focus on the oil and gas industry. To help their customers reduce the cost of mandatory hydrostatic pressure testing, Engenuity developed a set of fully automated test execution and reporting products, which combine precise process control, automatic text and email notification, and process history storage and replication. Rather than opting for a traditional PLC, this system runs on an edge programmable industrial controller, or EPIC.

Using Engenuity’s BOPX testing software, users can map out valve arrays and identify validation pressure limits for each component in the system. BOPX brings the system to pressure while precisely measuring the injected fluid and objectively comparing measurements against validation criteria using a patented constant-pressure/variable-volume pumping method. Collected data can be mapped between tests for comparison and reliability purposes and used to generate PDF reports.

However, with all these features, Ted Royer, a controls engineer with Engenuity, stresses that “all the test software is on the EPIC. BOPX is just an interface.”

After configuration data is transmitted from BOPX to the EPIC, the real-time control engine begins executing test scenarios. Connections to automated valve manifolds and to Engenuity’s EZ Valve retrofittable actuator for manual valves are integrated directly into the EPIC’s local I/O modules. As test execution proceeds, the controller monitors the process and contacts external mail and messaging services to generate notifications for a range of conditions. 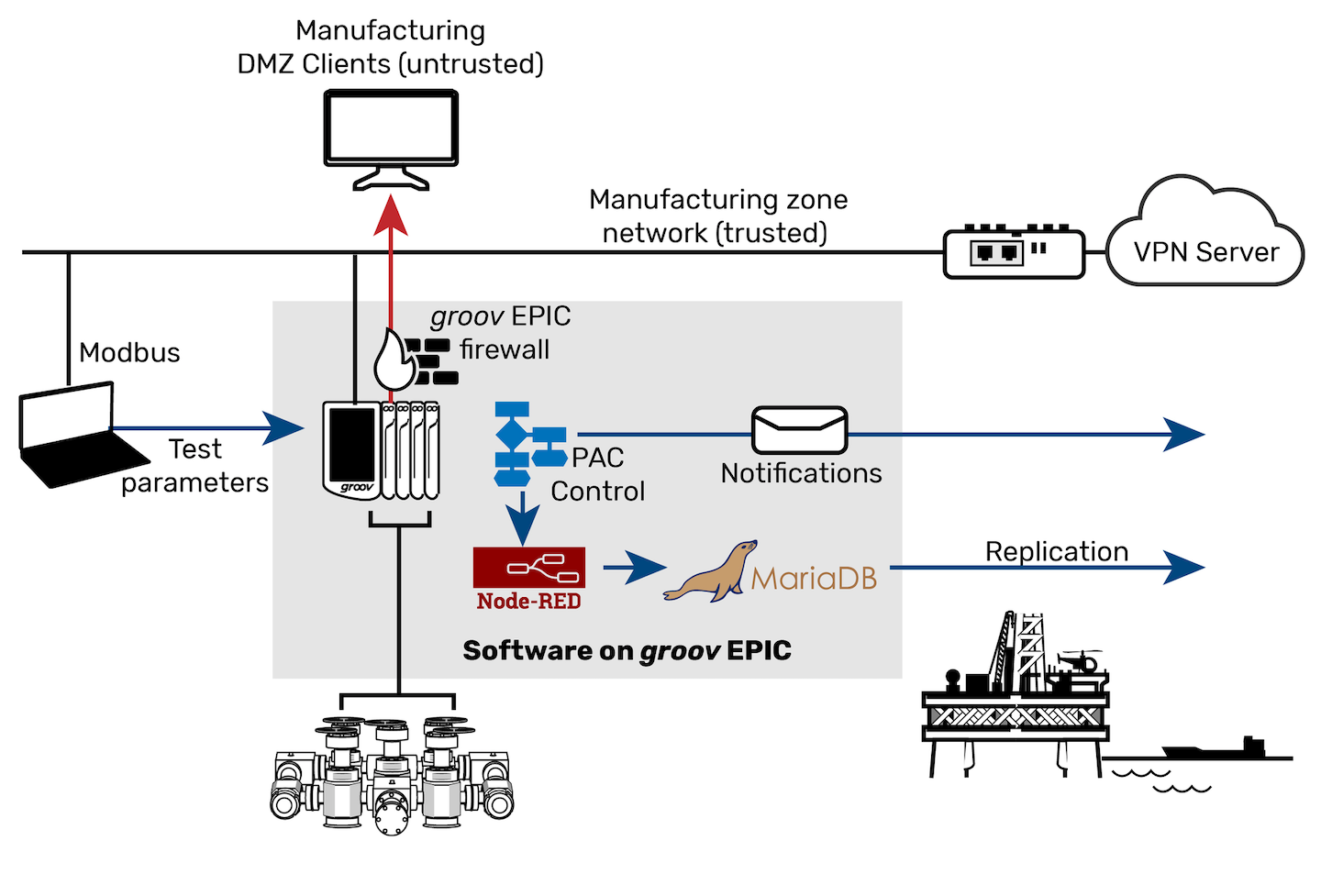 Engenuity uses the EPIC’s configurable firewall to segment the control network from external untrusted networks. Customers are able to access data using one of the controller’s two Ethernet ports, which is configured as a read-only interface.

The edge controller also stores any process data generated during testing to an internal MariaDB database server, which Engenuity installs and configures using the secure shell (SSH) interface to the EPIC’s operating system (OS). To transfer data from the control engine to the database, Engenuity uses an open-source IoT engine, called Node-RED, which is pre-installed on the EPIC. Engenuity configures Node-RED to monitor I/O, process variables, and events, then transmit these data points to MariaDB.

However, as Ted Royer explains, “Typically, on an oil rig, customers just have a WiFi connection to the equipment, which isn’t super reliable. Sometimes they want to pull massive amounts of records, even entire jobs.... It doesn’t have to be real-time, though, so we will set up another controller here in the office that serves as a replica for the one that’s in the field. We have plenty of bandwidth here [in the office], so it gives them the best of both worlds.”

Engenuity accomplishes this using MariaDB’s built-in replication function, which periodically sends transaction logs to the replica EPIC. To keep the architecture as simple and secure as possible, every replica controller in Engenuity’s offices connects to its companion through a separate, dedicated VPN appliance. Engenuity then grants customers read-only credentials to this private network. 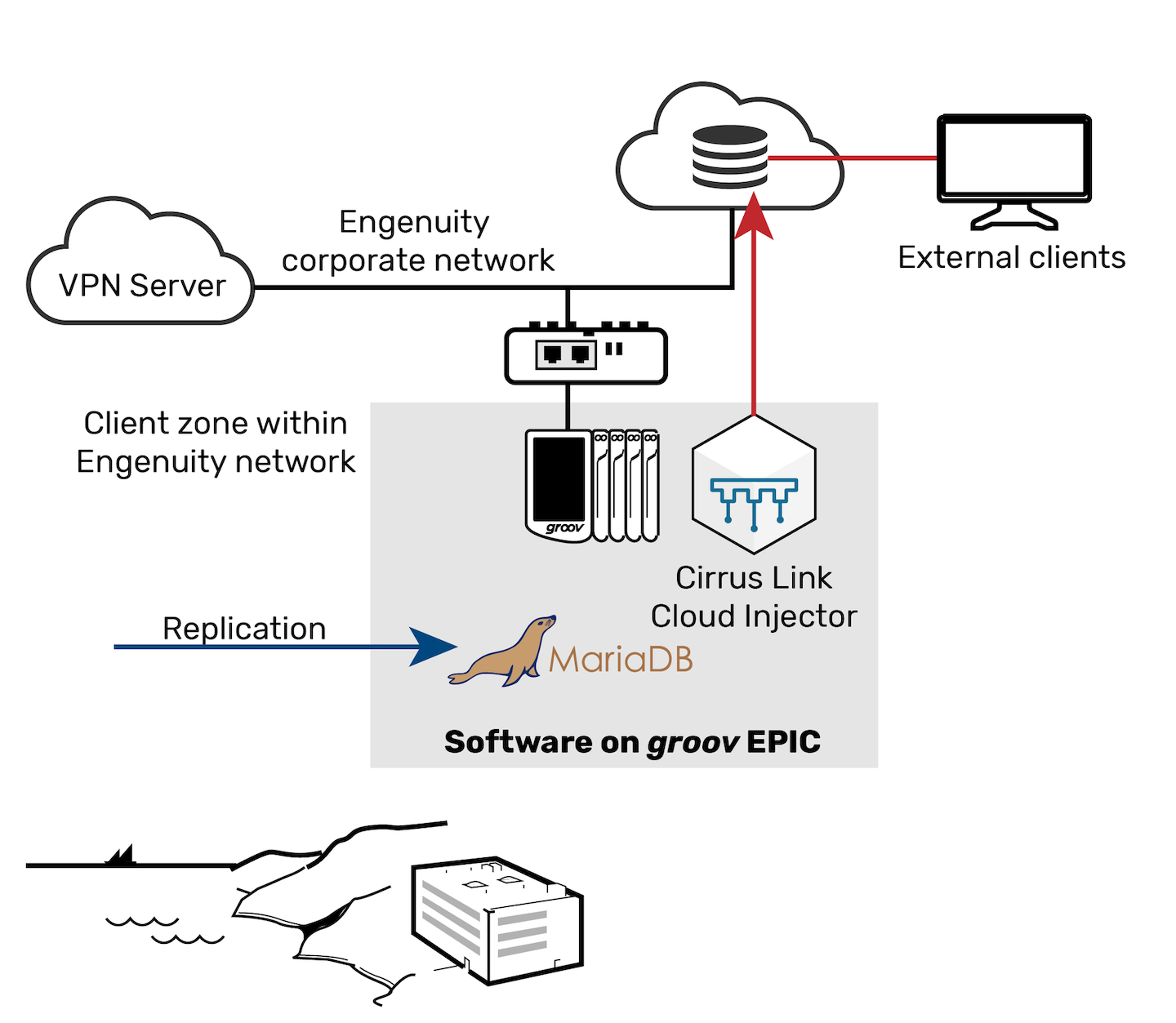 In their offices, Engenuity uses a duplicate groov EPIC with its own MariaDB server to store replicated testing data and transfer it to cloud storage for global distribution.If a customer wants to distribute process data beyond a single site, Engenuity uses Ignition Edge from Inductive Automation. The embedded connectivity platform allows the EPIC to send OPC tag data directly to cloud services like AWS, Azure, Google Cloud, or IBM Cloud. Once there, customers can access testing data around the world.

Engenuity decided to standardize on EPICs over traditional PLCs because the integrated automation lowered the cost of operation and maintenance while helping them deliver a more competitive solution. Royer points out that with traditional PLCs, Engenuity’s solution would require ongoing support from IT, but with edge controllers, they are able to manage the entire solution themselves.

“[Customers] don’t have space for racks of servers…. So now we are replacing that with stuff that can go outside in a NEMA 4 box.... [Our EPIC’s] got 9 servers on it and we haven’t even taken up 1 foot of space! I’ll get a text [from the control system] in the middle of the night, and I’m already logged in by the time [the customer] calls me…. I can tell them exactly where the problem is, and, usually, it’s something simple.”

For Engenuity’s customers, testing is required for regulatory compliance, and the cost of downtime may be $15-20k per hour. Depending on an installation’s size and operations, Engenuity’s BOPX testing system can save 10-20 hours for each full test with a fully integrated system. With high uptime and automated testing, Engenuity’s customers are able to reduce on-site staff by up to half and have adapted more easily to remote operations.

Josh Eastburn, Director of Technical Marketing
After 12 years as an automation engineer working in the semiconductor, petrochemical, food and beverage, and life sciences industries, Josh Eastburn works with the engineers at Opto 22 to understand the needs of tomorrow's customers. He is a contributing writer at blog.opto22.com.