US Weighs Sanctions on China Solar Over Forced Labor

Much of the world’s polysilicon comes through China’s Xinjiang province. 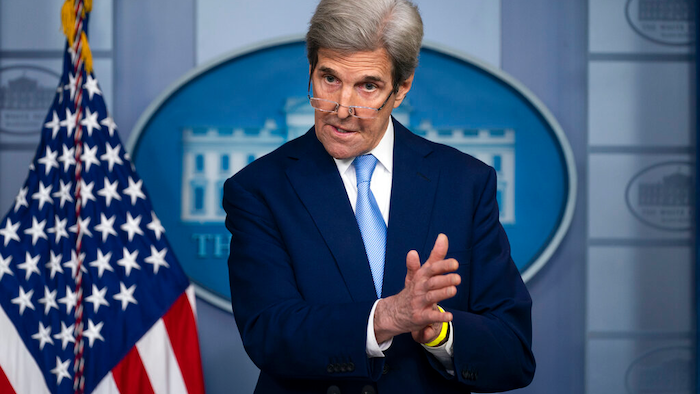 The Biden administration is considering sanctions over China’s alleged use of forced labor in production of solar panels and other components in renewable energy, climate envoy John Kerry told lawmakers Wednesday.

Kerry’s comments at the House Foreign Affairs Committee hearing sought to defuse one of the main arguments that congressional Republicans have cited against President Joe Biden’s push for a climate-friendly makeover of the U.S. economy: China's manufacturing dominance risks implicating buyers of Chinese-made solar panels, batteries and other green-energy tech in that country’s human rights abuses.

Much of the world’s polysilicon, used in photovoltaic cells for solar panels, comes through China’s Xinjiang province, where China is waging a sustained campaign against Chinese Muslims and ethnic minorities. That includes detention of more than 1 million people, who rights groups, news organizations and governments say are forced into labor in factories and other workplaces. China's foreign ministry last month called the accusations "lies and false information concocted by anti-China forces.”

Republicans have cited those human rights concerns about Chinese-made renewable-energy components, and China’s status as the world’s largest emitter of climate-wrecking fossil fuel pollution, in countering Democratic calls to step up U.S. solar and wind production and wind down coal and petroleum use.

“How can you assure us that … slave labor coming out of China, where genocide is taking place as we speak, are never a part of the climate solution in the United States?” asked Rep. Michael McCaul of Texas, the senior Republican on the committee.

Kerry told McCaul he was “absolutely correct” to raise the concern.

“It is a problem,” Kerry said. He cited “solar panels that we believe in some cases are being produced by forced labor.” Kerry also listed rare earth minerals produced by China and used in things such as magnets for wind turbines, among other uses.

Biden is calling for the United States to put trillions of dollars into his jobs plan and other proposals that would retool U.S. power and transportation sectors to pump out less fossil fuel pollution. That includes promoting U.S. use of solar, wind and other renewable energy — and boosting the country's patchy production of components vital to those industries.

“The best thing we could do is be more competitive” when it comes to China's dominance in the field of climate-friendly tech, Kerry said. Other countries are “cornering the market on that – why aren’t we?” he asked.

Kerry is a former secretary of state under President Barack Obama who now serves as Biden's envoy for climate and natural security.

Under pressing from the committee's Republicans, Kerry also repeated his denial of a claim that he once shared with Iran's foreign minister information that Israel had attacked Iranian interests in Syria at least 200 times.

The New York Times reported late last month that Foreign Minister Mohammad Javad Zarif made that claim in a recording that subsequently leaked. Zarif described himself as astonished at that news from Kerry, the newspaper said.

“On no occasion. Never,” Kerry said, in one of several flat denials to GOP lawmakers' demands for more details. “That didn't happen. End of story.”

Kerry also said he had never seen or heard a report of 200 such attacks before the article was published.