A worrisome bout of inflation struck in April, with year-over-year prices seeing their fastest rate of increase since 2008. 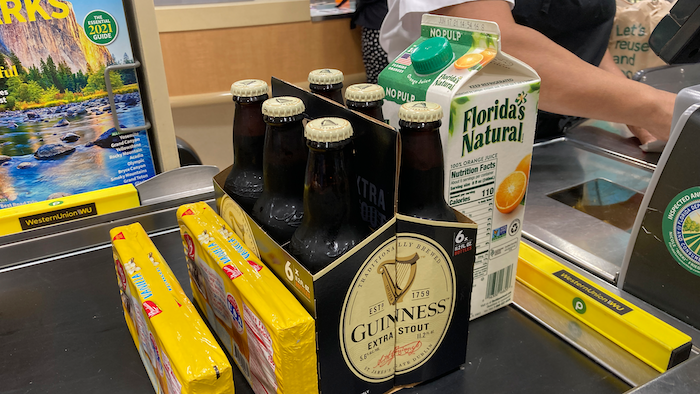 Groceries are shown at a checkout counter, Friday, April 16, 2021, at a grocery store in Surfside, FL.
AP Photo/Wilfredo Lee

WASHINGTON (AP) — A worrisome bout of inflation struck the economy in April, with U.S. consumer prices for goods and services surging 0.8%, the largest monthly jump in in more than a decade, and the year-over-year increase reaching its fastest rate since 2008.

The acceleration in prices, which has been building for months, has unsettled financial markets and raised concerns that it could weaken the economic recovery from the pandemic recession.

Wednesday's report from the Labor Department showed sharply higher prices for everything from food and clothes to housing. A 10% surge in the prices of used cars and trucks — a record jump — accounted for roughly one-third of last month's increases. Prices for vehicles, both used and new, have been soaring as a result of a computer chip shortage that has slowed auto production and reduced dealer supplies.

After years of dormant inflation, with the Federal Reserve struggling to increase it, worries about rising prices have shot to the top of economic concerns. Shortages of goods and parts related to disrupted supply chains have been a key factor.

The Fed, led by Chair Jerome Powell, has repeatedly expressed its belief that inflation will prove temporary as supply bottlenecks are unclogged and parts and goods flow normally again. But some economists have expressed concern that as the economic recovery accelerates, fueled by rising demand from consumers spending freely again, so will inflation.

“It looks like inflation pressures are not only building but are likely to be here at least through the rest of the year,” said Joel Naroff, chief economist at Naroff Economic Advisors. “With growth robust, firms have a measure of pricing power tat they haven't had in decades, and they appear to be using it.”

Investors, too, have grown increasingly jittery. On Tuesday, the Dow Jones Industrial Average sank more than 470 points — 1.4% — its worst day since Feb. 26.

Wednesday's inflation report showed that food prices rose 0.4%, the biggest such increase since a 0.5% rise last June. Energy costs, though, edged down 0.1%, with gasoline pump prices falling 1.4%, the biggest drop since May 2020.

Last month, Powell suggested at a news conference that Fed officials expect inflation to move above its 2% annual target over the next few months. The Fed has said it will allow prices to rise slightly above 2% for a period of time to make up for the past decade's shortfalls in inflation.

Powell has said that as long as the increase in inflation doesn't appear to be hurting consumer and business expectations about price increases, the central bank would be willing to let prices rise without acting to raise interest rates. That view has been supported by comments from other Fed officials including Lael Brainard, a board member who warned Tuesday against a premature Fed tightening that could harm the economy.