Dennis Williams, who led the United Auto Workers from 2014 to 2018, was one of two presidents convicted of corruption. 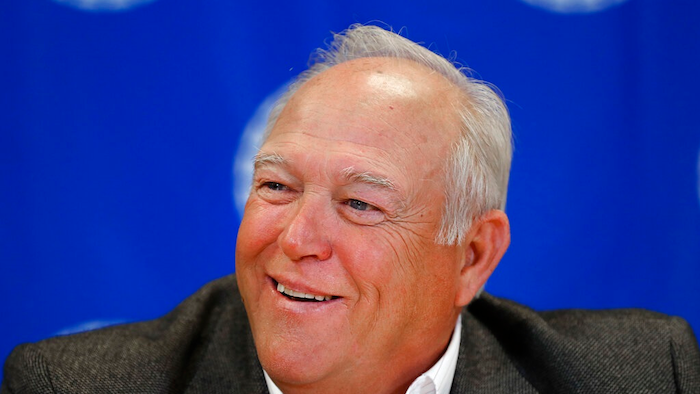 In a Thursday, Feb. 16, 2017, file photo, then-United Auto Workers president Dennis Williams speaks during a roundtable with reporters in Detroit. Prosecutors are seeking a two-year prison sentence for Williams, a former president of the United Auto Workers who they say had "two lives" — as a leader of a blue-collar union and a connoisseur of premium champagne and California vacation villas paid for with members' dues the U.S. attorney's office said in a court filing Monday, May 3, 2021.
AP Photo/Paul Sancya, File

DETROIT (AP) — A welder who rose from the factory floor to become president of a venerable U.S. labor union was sentenced Tuesday to 21 months in prison for luxurious winter stays in the California sun covered by dues paid by his blue-collar members.

Dennis Williams, who led the United Auto Workers from 2014 to 2018, was one of two presidents convicted of corruption in an investigation that revealed payoffs and embezzlements in the top tier of the Detroit-based union.

The probe has roiled the UAW and exposed brazen entitlement among union elite. The union has agreed to have an independent monitor watch its finances, and members might get an opportunity to elect future presidents rather than leave the job to delegates at a convention.

Williams, 68, pleaded guilty to an embezzlement scheme that turned union dues into a pot of cash for golf, lodging and fancy meals.

He symbolized an “upside down version of solidarity: Once I get to the top I'll get mine by taking yours,” Assistant U.S. Attorney Steven Cares said.

U.S. District Judge Paul Borman noted that Williams was at the "pinnacle" of his career in leading 400,000 members, especially auto workers at General Motors, Ford Motor and the U.S. arm of Stellantis, formerly known as Fiat Chrysler.

Williams acknowledged that he had undermined his life's work, but he also placed blame on his successor and golf pal, Gary Jones, who is awaiting his sentence.

“What I did was wrong,” Williams said, pausing at times to control his emotions. “I paid back every last cent to the UAW in restitution, plus back taxes. But that alone can’t fix it. ... My reputation is forever tarnished, and I am exiled from the UAW community.”

The UAW's Region 5 leadership, based in St. Louis, typically held winter meetings in Palm Springs, California. Williams turned the three-day event into a personal retreat during his tenure, even staying as long as four months in 2017, according to the government.

While railing against excesses in corporate America, Williams was ordering fine meals, sipping champagne and lighting big cigars in vacation villas, all while scheming to cover it up, prosecutors said.

“His abuses of power have created a stain on the union that will take years to wash away," Cares said.

Williams’ lawyers said he has repaid $132,000 to the UAW. They asked for a sentence of a year and a day, the minimum term to qualify for good behavior credits and a shorter prison stay.

Eleven union officials and a late official’s spouse have pleaded guilty since 2017, although not all the crimes were connected. The first wave of convictions, which included some Fiat Chrysler employees, involved taking money from a Fiat Chrysler-UAW training center in Detroit.

Before Williams was charged, the UAW last year said it sold a lakeside home that was built for him on union property in northern Michigan. It was listed for $1.3 million.