The law allowed Mexico's government to seize private gas stations in case of "imminent danger to national security" — and give them to the state-owed Pemex. 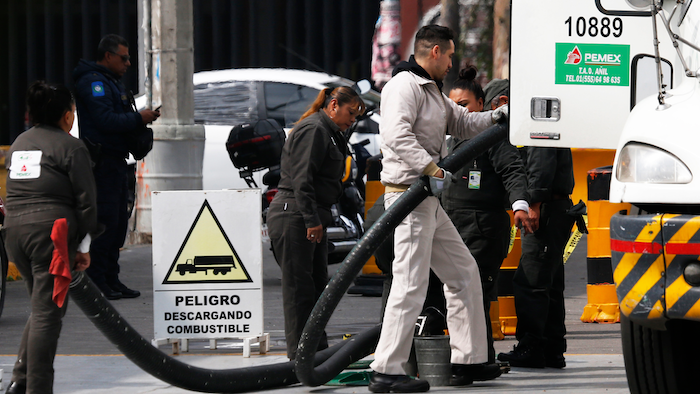 In this file photo, workers discharge gas from a truck to supply a gas station with fuel in the Iztapalapa area of Mexico City.
AP Photo/Marco Ugarte, File

MEXICO CITY (AP) — A judge issued an injunction Monday against a law passed in April that allows Mexico's government to seize private gas stations or terminals in case of "imminent danger to national security, energy security or the economy" and give them to the state-owed oil company Pemex to run.

The ruling was the latest legal setback for President Andrés Manuel López Obrador, who has already tangled with the judicial branch and regulatory agencies over initiatives that many critics say violate the country's constitution.

The government can appeal the injunction. López Obrador says the law is meant to combat contraband gasoline imports, because he claims private imports of gasoline — which he dislikes on ideological grounds — often don't pay taxes.

Mexico only allowed private gas stations starting in 2016, and they quickly took a large share of the market from Pemex, whose franchised stations were known for low-quality fuel and shorting customers on the volume of fuel delivered. The president argues that private companies which import gasoline without paying taxes on it should be closed, their stations taken over and given to Pemex to run.

But López Obrador revealed another motive behind the law — his nationalistic campaign to end gasoline imports. His pet projects include building oil refineries, and he also wants to rein in foreign companies that built wind and solar farms to produce electricity in Mexico.

López Obrador has already gotten Congress to pass laws to give the state-owned electric power utility preference over private renewable and natural-gas generating plants, even though many of the state-owned plants burn dirtier fuels like fuel oil, coal or diesel.

The same judge has issued an injunction against those rules, and López Obrador has publicly attacked him and other judges, suggesting they are in the pockets of private firms.