The company expects to lose factory output of 1.1 million vehicles for the year. 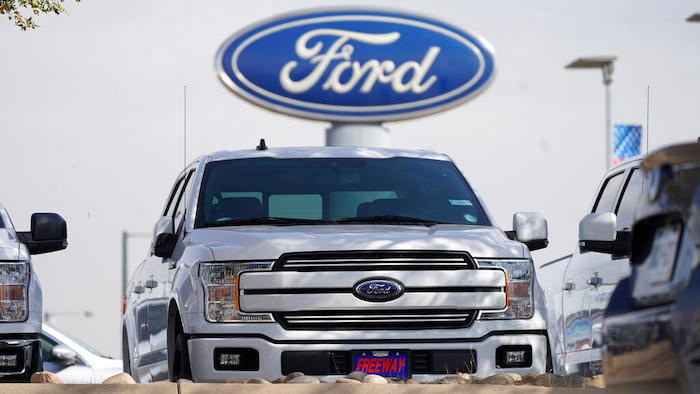 In this Sunday, Oct. 11, 2020, file photo, a row of 2020 sports-utility vehicles pickup trucks sits at a Ford dealership, in Denver. Ford Motor Co. says it made $3.26 billion in the first quarter, helped by rising vehicle prices and in spite of production cuts due to a global shortage of computer chips. The earnings reversed a nearly $2 billion net loss from a year ago, when Ford burned through cash at the start of the coronavirus pandemic.
AP Photo/David Zalubowski, File

DETROIT (AP) — Ford Motor Co. posted a surprising $3.26 billion first-quarter net profit on Wednesday, but the company said a worsening global computer chip shortage could cut its production in half during the current quarter.

Chief Financial Officer John Lawler said the second quarter should be the low point for the chip shortage, but it probably will last into next year. The situation will improve in the second half, but Ford still will see production fall 10% over original plans, he said. That means Ford won't be able to make up for any lost production this year. But CEO Jim Farley said Ford will work to limit the 10% cut.

The company expects to lose factory output of 1.1 million vehicles for the year, up from an earlier estimate of 200,000 to 400,000. That will mean fewer vehicles to sell, but thus far it's brought higher prices because demand is strong.

Nearly all automakers are struggling with the chip shortage, caused by semiconductor makers switching their factories to more profitable consumer-electronics processors when auto plants closed due to the coronavirus last year. The auto factories came back faster than expected, but the chip makers didn’t quickly switch their factories back to automotive-grade chips.

Farley said at first, the company thought it could make up lost production later in the year. But a March fire in Japan at a Renesas Electronics Corp. chip foundry made things much worse. Renesas supplies about two-thirds of the auto industry’s chips, including nine top-tier parts makers for Ford, Farley said. Other chip makers haven’t shifted from consumer electronics to make more automotive chips, he said. Auto chips have to meet tougher specifications to handle weather extremes and vibration.

“We’ve yet to see significant new (factory) capacity come online for our industry,” Farley said, adding that the company now estimates that recovery will stretch into the fourth quarter or even next year.

Renesas, he said, expects to return to full production in July.

Ford also said it has built about 22,000 vehicles without some computers due to the shortage, and it will retrofit them when chips become available.

Lawler attributed the large profit to Ford’s years of restructuring to make the company leaner, as well as higher prices for its vehicles due to tight inventories.

Investors apparently weren’t happy with Ford’s outlook for the year due to the chip shortage. Company shares fell 2.7% to $12.09 in extended trading Wednesday.

Lawler said the company's decision to allocate capital to develop more higher-profit trucks and SUVs is paying off with higher margins.

“You're seeing that flow through with the strong products,” he said. Since 2019, Ford’s average vehicle sales price is up $1,900 over the industry average, he said.

He also said the company has cut warranty costs by $400 million from the first quarter a year ago. Ford’s first-quarter earnings included a $902 million noncash gain on Ford’s investment in electric vehicle startup Rivian.

Ford did benefit from the chip shortage, especially in North America, its most profitable market. Lower production made vehicles more scarce, driving up prices as Ford shifted production to higher profit versions of vehicles like the top-selling F-Series pickup truck.

The company only had enough inventory March 31 to supply about 33 days of consumer demand. Ford, like other automakers, is looking at keeping lean inventories after the chip shortage passes, Farley said. That could mean fewer discounts and higher prices for consumers.

During the quarter, Ford sold more than 521,000 vehicles in the U.S., up 1% from a year earlier. Helped by strong pickup truck sales, the average sale price of a Ford vehicle was $47,858, more than 8% higher than the same period last year, according to Edmunds.com.

Jessica Caldwell, Edmunds’ executive director of industry insights, said the chip shortage could diminish what should be a highly profitable year for Ford, which was recovering from an old product lineup and production problems.

The automaker should be making big dollars based on high prices, Caldwell said.

“Ford is hanging on tight for now, but might find itself in a less secure position as this chipset shortage continues with no immediate end in sight,” she said.