Biofuels Producers, Farmers Not Sold on Switch to EVs

They argue that now is the time to increase sales of ethanol and biodiesel, not abandon them. 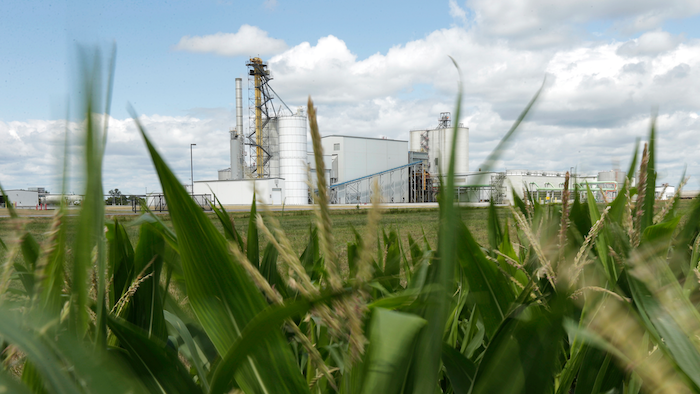 In this file photo, an ethanol plant stands next to a cornfield near Nevada, Iowa.
(AP Photo/Charlie Riedel, File

DES MOINES, Iowa (AP) — The president and auto industry maintain the nation is on the cusp of a gigantic shift to electric vehicles and away from liquid-fueled cars, but biofuels producers and some of their supporters in Congress aren't buying it. They argue that now is the time to increase sales of ethanol and biodiesel, not abandon them.

To help address climate change, President Joe Biden has proposed an infrastructure plan that includes billions of dollars to pay for 500,000 electric vehicle charging stations, electrify public vehicles and enhance the nation's power grid. These moves follow initiatives in California and other states to mandate electric vehicle sales and a goal by General Motors to shift production fully to electric vehicles by 2035.

Yet any shift from liquid-fueled cars to electric would be gradual, given the fleet of 279 million petroleum-powered vehicles now on U.S. roads. And producers of corn-based ethanol and soy-based biodiesel argue that biofuels will be needed for the foreseeable future.

The government's promotion of electric vehicles comes as the U.S. works to reduce carbon emissions that worsen climate change and to compete in the increasingly electric global auto market. The transportation sector accounts for the largest share of U.S. greenhouse gas emissions, and more than 80 percent of that comes from cars, pickups and larger trucks, according to the Environmental Protection Agency.

LMC Automotive, a consulting firm, predicts more than one million electric vehicles will be sold in the U.S. in 2023, rising to over four million by 2030 — still less than one-quarter of normal annual new vehicle sales of around 17 million. Electric vehicles now comprise less than two percent of U.S. new-vehicle sales.

Citing a recent study from Harvard and Tuft universities that found ethanol emits 46 percent less carbon than gasoline, biofuels advocates say it's imperative for the climate that the nation prioritize increased biofuel production. Geoff Cooper, who heads the St. Louis-based Renewable Fuels Association, calls ethanol the "low-hanging fruit" for reducing carbon emissions and slowing global warming. He supports an immediate move from gasoline blended with 10 percent ethanol to a blend of 15 percent.

"If the goal is to reduce carbon impacts of our transportation sector and we knew we're going to be using hundreds of billions of gallons of liquid fuels for the next several decades, why not take steps now to reduce the carbon intensity of those liquid fuels?" Cooper said. Each year, U.S. refineries produce about 15 billion gallons of ethanol — about 10 percent the volume of gasoline — and 1.5 billion gallons of biodiesel, which is typically blended with petroleum-based diesel for trucks and other heavy vehicles.

Plants around the country produce the fuel, but most are in the Midwest, led by Iowa with 43 ethanol refineries and 11 biodiesel plants. Nearly 40 percent of the U.S. corn crop is used for ethanol, and 30 percent of soybeans goes to biodiesel. Despite the carbon benefits of ethanol, others note the growth of biofuels prompted an expansion of corn acreage, increased use of fertilizers and more pollution of waterways. Biofuels plants also typically use hundreds of millions of gallons of water annually.

Iowa's two Republican U.S. senators consider the shift toward electric vehicles a threat to farmers. Sen. Charles Grassley said last fall that a proposal by Democratic Sen. Jeff Merkley of Oregon and Rep. Mike Levin of California to end U.S. sales of gas-powered vehicles by 2035 would devastate Iowa. "This ... would absolutely destroy Iowa's economy because it's so dependent on agriculture and agriculture is so dependent on biofuels," Grassley said.

Iowa Sen. Joni Ernst argues that tax credits for buying electric cars typically go to well-to-do people on the East and West coasts and are propping up an industry that hurts demand for biofuels. "It's not only the move to all-electric vehicles that should have Iowans concerned; it's the crazy tax breaks that wealthy coastal elites are getting for their electric vehicles," Ernst states on her Senate website. "I firmly believe Iowa taxpayers shouldn't be footing the bill for millionaires to get a discount on luxury cars."

It is true that many who got the $7,500 federal electric vehicle tax credit since its inception in 2009 could afford a car that cost six figures or more. But since then, new models and higher sales have brought economies of scale and lower prices that appeal to more mainstream buyers.

The ethanol industry itself was a beneficiary of a 45-cent-per-gallon tax credit that provided about $30 billion to help the industry get established before that expired a decade ago. And farmers who grow commodity crops, such as corn and soybeans, still receive help from the federal government, including subsidized crop insurance costing billions of dollars annually.

Despite assurances the move to electric will be gradual, many farmers see the shift as a threat to their livelihoods and doubt state and federal officials from urban areas will protect rural economies. "It's like you're almost helpless," said Ed Wiederstein, a semi-retired livestock and grain farmer near Audubon in western Iowa. "It's like a snowball that goes downhill."

Joel Levin, executive director of the nonprofit advocacy group Plug In America, said the market will favor electric cars not only for environmental reasons but also because they're high performance. "It's not like Californians wants you to eat your broccoli. These cars are fun to drive," Levin said. "People don't drive Teslas just because it's good for the environment. They drive Teslas because it's a sick car."

Over time, a switch to electric vehicles likely will force farmers to adapt, said Chad Hart, an agriculture economist at Iowa State University. Farmers in states such as Iowa and Illinois still will mainly grow corn and soybeans because the soil and climate are perfect, but farmers elsewhere will raise other crops, he said.

"Agriculture is always shifting the crop mix to fit whatever markets offer the best opportunity," he said.