Dominion serves 7 million customers in 16 states and is a Fortune 500 company based in Richmond, Virginia. 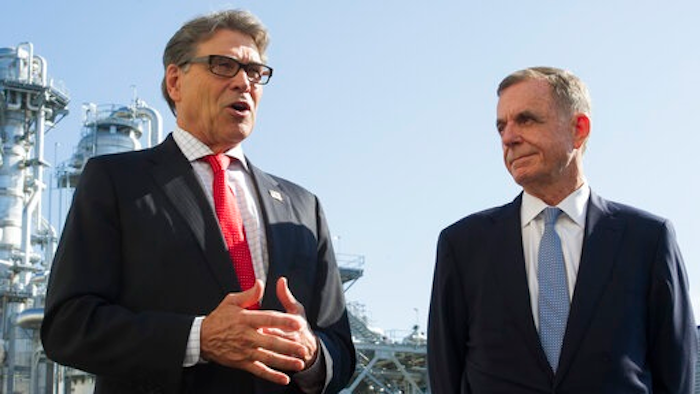 In this Thursday, July 26, 2018 file photo, Secretary of Energy Rick Perry, left, with the main cyrogenic heating exchange behind him, and Thomas Farrell, II, chairman, president and CEO, Dominion Energy, speak with reporters at Dominion Energy's Cove Point LNG liquefaction Project facility in Lusby, Md., Tom Farrell, who led Dominion Energy for more than a decade, has died Friday, April 2, 2021 one day after he stepped down from his post. He was 66.
AP Photo/Cliff Owen, File

RICHMOND, Va. (AP) — Tom Farrell, who led Dominion Energy for more than a decade and was a powerful force in Virginia business and politics, died Friday, one day after stepping down from his post as the company's executive chairman. He was 66.

A news release from the utility said Farrell, who served as the company’s chairman, president and chief executive officer from 2007 to 2020, had been battling cancer, which took a sudden turn in recent weeks.

“Tom was a peerless mentor and outstanding leader who sought to find innovative solutions to challenges at Dominion Energy, in the utility industry and in the community he called home,” said Robert M. Blue, who succeeded Farrell as board chairman. “In his tenure at the company, Tom oversaw an era of prosperity and growth, and a long-term transformation that will have a lasting impact on clean energy development and on the health of the environment.”

Farrell spent more than 15 years practicing law before joining Dominion Energy as general counsel in 1995. Over the next nine years, he served in several senior management positions at the company. Farrell was named president and chief operating officer in 2004, and president and chief executive officer in 2006. He was elected chairman in 2007, a post he held until Thursday.

The company said in its news release that Farrell helped lead the utility's acquisition of Consolidated Natural Gas in 2000. Farrell in recent years also focused on building solar and wind energy facilities and working toward emissions with a commitment to net zero emissions.

Dominion serves 7 million customers in 16 states and is a Fortune 500 company based in Richmond, Virginia.

In 2014, the company partnered with Duke Energy to launch the Atlantic Coast Pipeline project, a 600-mile (965-kilometer) natural gas pipeline designed to cross West Virginia and Virginia into North Carolina. The massive infrastructure project drew fierce opposition from many landowners, activists and environmental advocates, who said it would damage pristine landscapes and harm wildlife.

Dominion canceled the $8 billion project last July, as legal battles had mounted, construction fell behind schedule and the cost had ballooned. Opponents questioned whether there was sufficient need for the gas it would carry and said it would further encourage the use of a fossil fuel at a time when climate change makes a shift to renewable energy imperative.

“He was devoted to his faith and family above all, and his quiet, calm work made Virginia better. My thoughts are with Anne, Peter, Stuart, and all who loved him,” Northam said.

Sen. Tim Kaine said that Farrell “had a major influence on Richmond, our Commonwealth, and his beloved UVA,” a reference to Farrell’s alma mater, the University of Virginia, from which he received his bachelor’s and law degrees.

“It’s hard to think of an individual who has had a greater impact on the growth and success of our city in the 21st century more than Tom Farrell,” Stoney said.

Farrell had served as the chairman of Altria Group, Inc., the parent company of Philip Morris USA.

The Dominion news release said he was chairman of the Colonial Williamsburg Foundation’s board of trustees and was appointed to the Board of Visitors at the University of Virginia. He also served as a member of the board of trustees of the Virginia Museum of Fine Arts.

“We are heartbroken,” said Richard Cullen, former chairman of the law firm McGuireWoods and Farrell’s brother-in-law. “This is an incredible loss of a remarkable man.”