Caution about more production faces a different outlook from Russia, which has been an advocate for more supply. 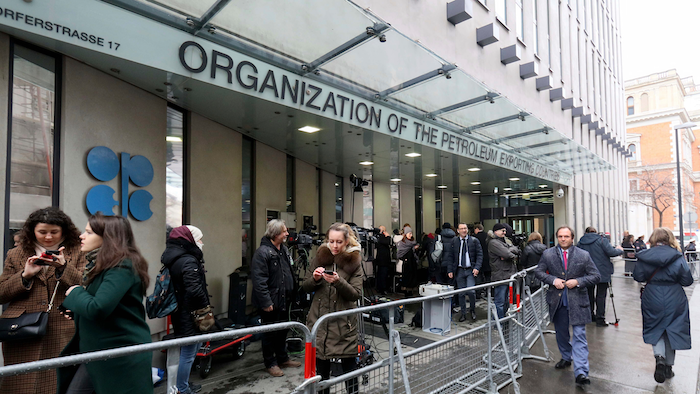 In this file photo taken before the coronavirus pandemic restrictions, people stand outside the headquarters of the Organization of the Petroleum Exporting Countries, OPEC, in Vienna, Austria.
AP Photo/Ronald Zak, FILE

FRANKFURT, Germany (AP) — Members of oil producer cartel OPEC and allied countries are cautiously weighing an increase in production now that prices have recovered to near their pre-pandemic levels.

Their online meeting Thursday takes place against the background of more confidence that prices have steadied since a precipitous fall last year, though concerns remain that the spread of new variants of the coronavirus could hurt demand again.

The energy minister of Saudi Arabia, the de facto leader of the member countries, urged "caution and vigilance" in his opening statement, saying that recovery would very much depend on vaccine rollouts and success in containing the pandemic. Abdulaziz bin Salman said that "while there is no doubt that the oil market has improved" since members last met, "the anxiety surrounding the recovery has not receded."

The so-called OPEC Plus - which includes countries like Russia that are not part of the cartel but have been coordinating production in recent years - made deep cuts in output in 2020 to stave off a collapse in prices.

"The group still has a self-imposed cap of not raising the target production by more than 500,000 barrels per day on a monthly basis, which does not include the return of the extra 1 million barrels per day of Saudi Arabian cuts, which would come on top," said Bjornar Tonhaugen, head of oil markets at Rystad Energy. "The higher impact narrative of the meeting will therefore be guidance from Saudi Arabia on its plan on when and how fast it plans to return its extra cuts to the market."

Caution about more production on the part of Saudi Arabia faces a different outlook from Russia, which has been a reliable advocate for more supply. One factor contributing to differences is that Russia can balance its state budget at lower oil prices than can Saudi Arabia, according to the International Monetary Fund. Russia's Deputy Prime Minister Alexander Novak said at the start of the meeting that "the oil market has not yet fully recovered but we are in much better shape than a few months ago."

The price of crude oil influences gasoline prices for U.S. motorists, since the cost of crude accounts for about half the price at the pump. The main influence on U.S. pump prices in recent days has been February's winter storms, which took 26 refineries offline. That has sent gasoline more than 30 cents per gallon higher since the beginning of February, to a national average of $2.74 on Thursday, according to the AAA federation of automotive clubs. The AAA forecast the national average to hit at least $2.80 in March, adding that motorists could see some relief by month end as refineries resume operation.