You can't blame it on the coronavirus pandemic. This one is on Mother Nature. 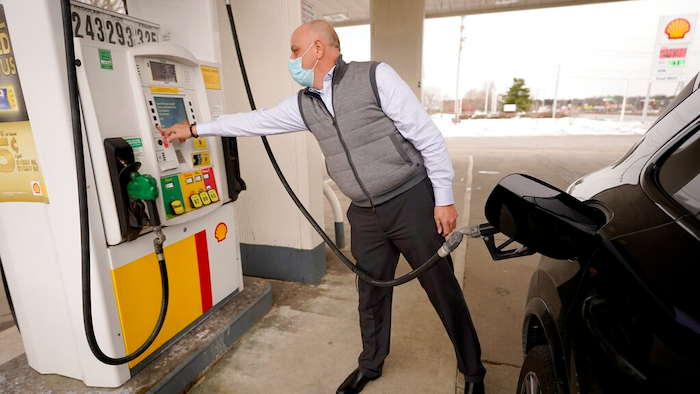 Jeremy Heskett, of Boston, prepares to pour gasoline at a Shell gas station, Thursday, Feb. 18, 2021, in Westwood, Mass. A deep freeze in the Gulf state region and beyond that killed dozens of people, left millions without power and jeopardized drinking water systems also forced as many as 11 refineries offline. The resulting capacity cuts could drive gas prices up by about 10 to 20 cents per gallon, said Patrick DeHaan, petroleum analyst at the travel app GasBuddy.
AP Photo/Steven Senne

Add one more potential item to the list of economic hardships dealt to Americans in the past 11 months: rising gas prices.

But you can't blame it on the coronavirus pandemic. This one is on Mother Nature.

A deep freeze in the Gulf state region and beyond that killed dozens of people, left millions without power and jeopardized drinking water systems also forced as many as 11 refineries offline, according to travel app GasBuddy. The resulting capacity cuts could drive gas prices up by about 10 to 20 cents per gallon, said Patrick DeHaan, the head of petroleum analysis at GasBuddy.

The national average for a gallon of gas is currently between $2.54 and $2.57 depending on who you ask, meaning prices could rise to around $2.75 per gallon fairly quickly. That would be the highest price since the summer of 2019 and the highest seasonal price in more than five years, according to GasBuddy.

Fortunately, it shouldn't last long, assuming refineries get up and running at full strength after the frigid weather moves out.

“Once power is restored, once temperatures rise above freezing, refineries will restart, oil production will restart and it shouldn’t have more than a several-weeks impact,” DeHaan said.

Also, because gas demand has fallen as the pandemic forced millions of people to work from home, there are adequate reserves to prevent prices from rising too much.

“In terms of transportation fuels demand, it’s kind of an opportune time," said Tom Kloza, global head of energy analysis at Oil Price Information Service. "Gasoline demand is quite low and it’s going to continue to be low well into March. And we have very, very high inventories of product.”

Kloza said gasoline demand is about 15% below pre-pandemic levels, which comports with data from the U.S. Department of Transportation that estimates a 13.7% decrease in cumulative vehicles miles from January through November of 2020. And that includes positive gains in January and February before the pandemic struck the U.S.

Demand for gas will be extremely low next week, Kloza said, but stressed that the recent weather-caused supply cuts won't change his projections for the year.

"We think there will be enough mojo or enough things happening, a significant recovery in gasoline demand on the other side of the vaccinations that maybe we’ll get up to a national average of $2.75 or $2.80,” Kloza said.