Called the "European Battery Innovation," the project will allow non-European businesses such as Tesla to benefit from EU investment. 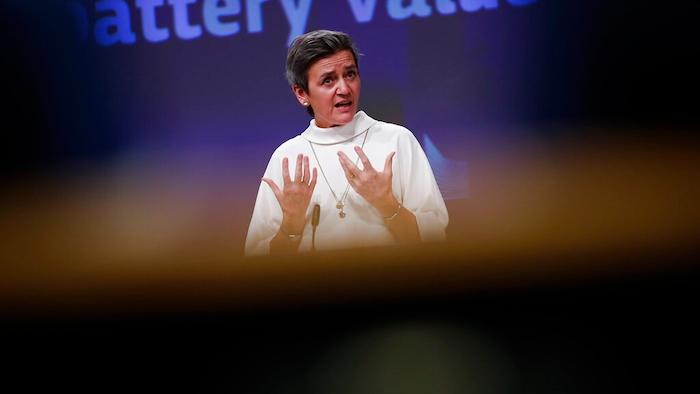 European Commissioner for Europe fit for the Digital Age Margrethe Vestager speaks during a news conference on European project in battery value chain at the European Commission headquarters in Brussels,Tuesday, Jan. 26. 2021. The European Union has approved €2.9 billion (US3.53 billion) in subsidies from 12 member countries for a second pan-European project to develop the bloc's electric battery industry and move away from its reliance on Asian imports.
AP Photo/Francisco Seco, Pool

BRUSSELS (AP) — The European Union has approved 2.9 billion euros in subsidies from 12 member countries for a second pan-European project to develop the electric battery industry and move away from its reliance on Asian imports.

The EU's executive commission had already cleared a 3.2 billion-euro plan subsidized by seven countries in Dec. 2019 to support research and innovation in a key sector where Europe is lagging behind Asian competitors.

The EU, which expects that demand for batteries will grow quickly in the coming years, said Tuesday that the latest public funding is expected to unlock an extra 9 billion euros in private investment.

Called the “European Battery Innovation," the project will allow non-European businesses such as Tesla to benefit from EU investment. Tesla, which is headquartered in California, is building its first European factory in the Berlin area. Tesla expects to make 150,000 electric cars a year at the new plant starting in mid-2021, with plans to increase that number to half a million annually.

“If businesses come here with the right projects (...), then it can happen and will benefit a much, much wider circle of European companies than otherwise," said Margrethe Vestager, the EU commissioner in charge of competition policy.

China dominates the world’s production of new generation batteries as it hosts the majority of the world’s lithium refining.

“Thanks to its focus on a next generation of batteries, this strong pan-European project will help revolutionize the battery market," EU commission vice-president Maros Sefcovic said. “It will also boost our strategic autonomy in a sector vital for Europe’s green transition and long-term resilience."

The development of batteries for electric vehicles fits in the commission's plan to make the EU carbon neutral by 2050 and to cut the bloc’s net greenhouse gas emissions by at least 55% by the end of the decade compared with 1990 levels.

Sefcovic said the EU intends to develop a battery industry capable of powering at least six million electric cars each year by 2025.

“With significant support also comes responsibility," said Vestager. “The public has to benefit from its investment, which is why companies receiving aid have to generate positive spillover effects across the EU.”