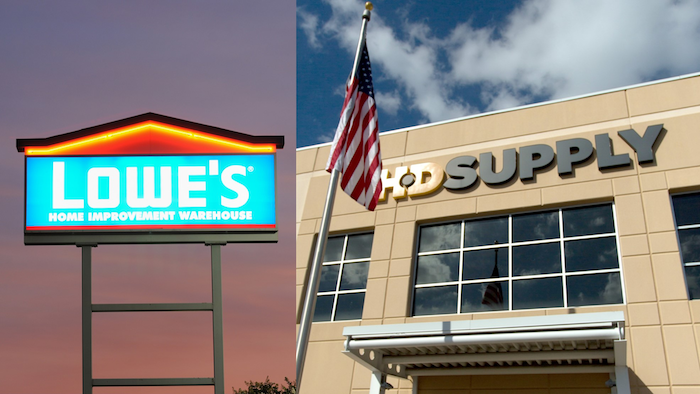 For about five hours on Monday, it seemed a landmark deal in the industrial supply space was likely to happen, before being shot down.

After Bloomberg reported earlier in the day that Lowe's was in preliminary talks with HD Supply regarding an acquisition, the home improvement retailer posted a brief but concise statement refuting that news.

"While it is the company's practice to not comment on rumors or speculation, we believe it is important to note that Lowe's is not in discussions with HD Supply and we have no plans to pursue a transaction with them," Lowe's said. "The company does not intend to make further statements regarding this matter."

The early report cited "people familiar with the matter" claiming that Lowe's and HD Supply had been discussing a deal with advisors, but that no final decision had been made. Bloomberg cited one person who said that while Lowe’s recently approached HD Supply, the retailer doesn’t currently plan to proceed with a deal. The report noted that it is unknown whether HD Supply is in talks with other potential buyers.

HD Supply was spun off from The Home Depot in 2007, and the distributor became an independent publicly-traded company in 2013.

On Oct. 19, HD Supply announced the completed sale of White Cap to private firm Clayton, Dubilier & Rice, which bought the unit for $2.9 billion in a deal valued at $4 billion. CD&R merged White Cap with its subsidiary Construction Supply Group, forming a new company called White Cap Supply Holdings. The completed transaction came 11 weeks after the deal was initially announced. Previously, HD Supply announced in September 2019 that it would split into two independent companies by the middle of its fiscal 2020. The company reaffirmed its commitment to that plan in its Q1 earnings report on June 9, but then announced the White Cap sale two months later.

HD Supply most recently reported its 2020 Q2 fiscal results on Sept. 9 for the period ended Aug. 2, showing that net sales of $1.6 billion fell 4.4 percent year-over-year, gross profit fell 5.8 percent, operating profit of $13 million fell 6.2 percent and net profit of $131 million fell 3.0 percent. The company has not announced a reporting date for its Q3 earnings, which essentially spanned the August-October period.

Lowe's hasn't recently mentioned distribution acquisition plans, though it has announced major supply chain expansion plans of its own. In mid-August, the company said it was beginning an 18-month stretch that will include opening 50 cross-dock delivery terminals, seven bulk distribution centers and four e-commerce fulfillment centers. This includes 20 cross dock terminals and one West Coast e-commerce fulfillment center in the second half of fiscal 2020. Together, the goal is to provide more same-day and next-day service offerings and enable faster e-commerce shipping across the country.

Atlanta, GA-based HD Supply was No. 4 on Industrial Distribution’s 2020 Big 50 List on account of its $6.15 billion in 2019 sales, but the company figures to move down to the No. 9-12 range on next year’s list after the White Cap divestment, which sold off approximately half of the company’s business revenue.