Hundreds of thousands were brought in to work in logging, in mines, on farms and in factories. 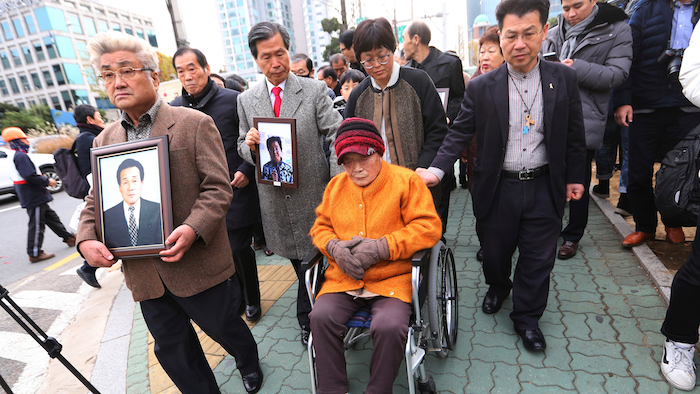 TOKYO (AP) — For years, Yeom Chan-soon was haunted by the cracking sound of a leather belt eating into the flesh of a fellow Korean mine worker being punished for trying to escape from forced labor in Japan.

That dark chapter in Japan’s history, when hundreds of thousands of people were brought from the Korean Peninsula and other Asian nations to work in logging, in mines, on farms and in factories as forced labor, lives on as a modern legacy in the companies that came to dominate the Japanese economy after World War II.

Survivors of the camps, their families and supporters are still seeking compensation and atonement for the labor and suffering. The companies, among the biggest names in Japan Inc., such as Mitsubishi and Mitsui, say such issues were settled by a treaty decades ago.

Critics say Japan has failed to fully reckon with those wrongs that date back to the late 1890s and lasted through the colonization of the Korean peninsula, until the end of World War II in 1945. The legacy overshadows Tokyo's relations with its neighbors even today and, some say, helps to perpetuate mistreatment of minorities among its own people.

“Japanese have never seriously faced up to the realities of the devastating abuse Japan brought to neighboring nations and their people,” said Masaru Tonomura, a professor of history at the University of Tokyo.

That failure to face up to history has contributed toward defensive, nationalist-leaning thinking, Tonomura and other experts say.

The number of survivors of forced labor before and during World War II is dwindling 75 years after Japan's August 15, 1945, surrender. But their stories can be found in oral histories compiled by the late Eidai Hayashi, a researcher who spent his career unearthing facts about Japan’s wartime mobilization of laborers and other wrongdoings.

“When the wooden stick broke, the beating went on with a shovel that was picked up. He was beaten until pieces of torn skin stuck to the metal. His face got twisted, and he collapsed, not even able to scream,” Yeom was quoted as saying in Hayashi's 1981 book, “Forced Into Forced Labor."

The book described frequent beatings by belts, wooden sticks and whatever else was around in what Yeom called “lynchings” at the Mitsui coal mine where he worked from 1941.

Hayashi’s book includes testimonies from a dozen Korean workers and 11 Japanese, including guards and police, who recalled the systemic and brutal mistreatment of Koreans.

Some of Japan's biggest, wealthiest companies originated in industrial groups called “zaibatsu,” that relied on forced labor, especially during wartime, when labor was scarce because so many adult men were away fighting.

The Mitsubishi, Mitsui and Sumitomo conglomerates have denounced continuing demands for reparations. The companies are eager to put such history to rest.

Nippon Steel, related to the Sumitomo industrial group, is appealing a landmark 2018 decision by the South Korean Supreme Court ordering Mitsubishi Heavy Industries and Nippon Steel to pay damages for the coerced labor.

Not all companies face the same legal action, but their stances are similar.

“We think what happened during the special circumstances of war is unfortunate. But we were not behind that system as a company, and we were not in a position to respond,” said Akira Masuda, a spokesman for Nippon Coke & Engineering Co., formerly Mitsui Mining Co., another company that used such labor.

There have been some moves to atone for the bitter history. But most of those came more than 20 years ago, in apologies by Chief Cabinet Secretary Yohei Kono in 1993, and by Prime Minister Tomiichi Murayama in 1995.

The current prime minister, Shinzo Abe, has insisted the issues are settled.

In a 1997 settlement of a lawsuit brought by families of Koreans who died in American attacks on a wartime steel-works facility, the company set up a memorial for the dead workers.

That move was key in communicating remorse and contrition, said Keiichi Karatsu, the chief lawyer for Nippon Steel in that case.

Money is less of an issue for those who suffered forced labor than spiritual solace and a sense of closure, said Karatsu, now a professor of law.

“People’s torment in their hearts still needs to heal, and Japan should keep trying, sincerely,” he said.

Still, wartime issues, including use by the Japanese Imperial Army of women pressed into sexual slavery, have continued to sour bilateral relations, with each nation “downgrading” the trade status of the other last year.

Apart from occasional calls for Korean boycotts of Japanese products, the animosity and lack of diplomatic dialogue of recent years contrasts with cultural and human-level exchanges, evident in the popularity of Korean pop music and movies in Japan.

Echoing the turmoil over racism embroiling the U.S., emotions have run high over statues. Statues have been set up in South Korea and other nations of a young woman symbolizing “comfort women,” the wartime sex slaves. In the latest development, a statue thought to resemble Abe depicted kneeling in apology, was placed before the figure of a woman, one-upping the previous portrayals.

At each step, Japan's leaders have faced a choice over whether or not to show contrition.

If antagonisms between the two important U.S. allies are to heal, both sides must try to meet halfway, said Kim Gwang-yol, a professor at Seoul’s Kwangwoon University.

“Both countries need to make concessions and reach a comprise,” Kim said.