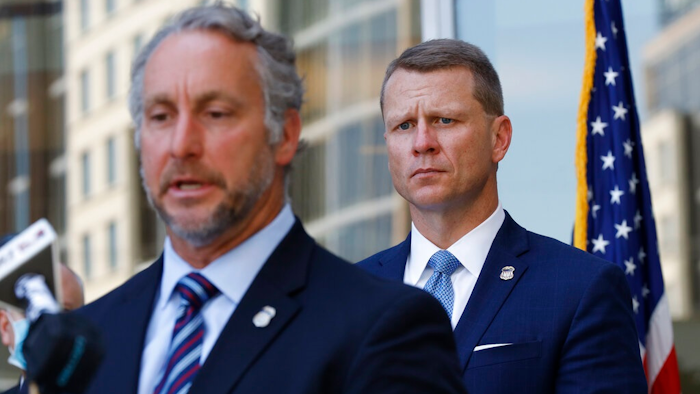 Acting Director of U.S. Immigration and Customs Enforcement Matt Albence comments Thursday, Aug. 6, 2020, in Jackson, Miss., after the announcement of the indictments of four executives from two Mississippi poultry processing plants on federal charges tied to one of the largest workplace immigration raids in the U.S. in the past decade. Their announcement happened a day before the one-year anniversary of the raids in which 680 people were arrested at seven poultry plants in central Mississippi. U.S. Attorney Mike Hurst listens in rear.
AP Photo/Rogelio V. Solis

JACKSON, Miss. (AP) — Four executives from two Mississippi poultry processing plants have been indicted on federal charges tied to one of the largest workplace immigration raids in the U.S. in the past decade.

U.S. Attorney Mike Hurst and the acting director of U.S. Immigration and Customs Enforcement, Matt Albence, announced the indictments as the documents were unsealed Thursday.

Their announcement happened a day before the one-year anniversary of the raids in which 680 people were arrested at seven poultry plants in central Mississippi.

Hurst and Albence also scolded journalists for reports that focused on the arrests separating children from immigrant parents who were sent to detention centers.

“If a parent puts their child in that position where they commit a criminal act that subjects them to being arrested and detained ... that responsibility falls on them,” Albence said.

None of the four people from the newly unsealed indictments were arrested on the day of the raids, said Hurst, who is the U.S. attorney for south Mississippi. He said they worked as managers, supervisors or human resources employees.

Hurst said journalists have failed to focus on the American victims of identity theft — people whose Social Security numbers have been falsely used by immigrants working in the U.S. without proper documentation.

Amelia S. McGowan, an attorney who works on behalf of immigrants for the Mississippi Center for Justice, responded later: “Trotting out anti-immigrant accusations won’t hide that the only theft here is the executives’ profiteering off vulnerable workers in unsafe conditions and at inadequate wages."

The chairman of the U.S. House Homeland Security Committee, Democratic Rep. Bennie Thompson of Mississippi, said in a statement Thursday that he's glad the Trump administration, a year later, is bringing criminal charges against employers and plant managers.

“However, the Administration still has not answered for the cruel and unnecessary family separation inflicted on hundreds of Mississippi families and how it continues to poorly treat immigrants," Thompson said. "With hundreds left behind, it’s clear that working families, rather than the employers taking advantage of these families, are the ones that continue to suffer from the effects of this raid.”

Two people from the indictments unsealed Thursday — Salvador Delgado-Nieves and Iris Villalon — worked at A&B Inc., a plant in Pelahatchie.

Delgado-Nieves, 57, of Pelahatchie, was charged with harboring people who were in the U.S. illegally and assisting them with falsely presenting themselves as U.S. citizens. He was also charged with helping immigrants obtain false Social Security cards and of making false statements to law enforcement. Conviction would carry up to 74 years in prison and $2.5 million in fines, Hurst said.

Villalon, 44, of Ocean Springs, Mississippi, was charged with harboring a person who was in the U.S. illegally and one count of making false statements about hiring immigrants without proper documentation. Conviction would carry up to 20 years in prison and $750,000 in fines, Hurst said.

A indictment says Johnson, 50, of Kosciusko, Mississippi, was a human resources manager, and Willis, 39, of Flowery Branch, Georgia, was manager of the plant.

Johnson was charged with harboring people who were in the U.S. illegally, wire fraud and aggravated identity theft. Conviction on all charges would carry up to 84 years in prison and $2.25 million in fines, Hurst said.

Willis was charged with harboring people in the U.S. illegally. Conviction on all charges would carry a maximum of 50 years in prison and $1.25 million in fines, Hurst said.

An indictment says both Willis and Johnson harbored immigrants after the plant was raided.

Villalon, Johnson and Willis appeared before a magistrate Thursday. Each pleaded not guilty, and each was released. Each declined to comment outside the courtroom.

A hearing for Delgado-Nieves was also scheduled for Thursday but was delayed by more than an hour.