Ohio's House speaker and four associates are accused of taking a $60 million bribe. 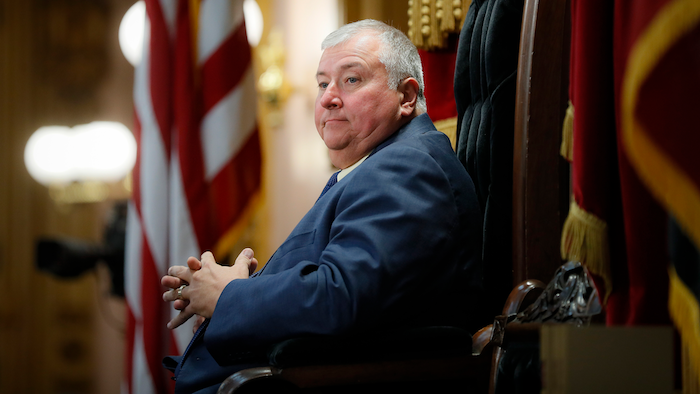 Republican Ohio state Rep. Larry Householder sits at the head of a legislative session as Speaker of the House, in Columbus, Ohio, Wednesday, Oct. 30, 2019.
Associated Press

TOLEDO, Ohio (AP) — A $1 billion bailout for Ohio’s two nuclear plants that’s now entangled in a state bribery scandal had little support when the idea came up three years ago. It was all but dead until the spring of last year, when the new leader of the Ohio House stepped up with a last-ditch attempt to give the plants a financial lifeline.

But that’s all on shaky ground again after federal authorities accused the powerful Republican Ohio House speaker and four associates of orchestrating a $60 million bribery scheme involving corporate money secretly funneled to them in exchange for passing the bailout.

The question for state lawmakers who are under pressure to repeal the bailout is whether they’re willing to face another divisive debate — this time under the shadow of scandal — in order to find a new way to prop up the financially strapped nuclear plants.

Here is a look at how the bailout came about and its prospects going forward.

Nuclear plants nationwide were warning four years ago that their aging reactors were in need of financial help, because they couldn't compete with cheaper natural gas-fired plants and subsidized renewable energy. It was no different in Ohio.

FirstEnergy Corp., whose subsidiary operated the Ohio plants at the time, pressed state lawmakers in 2017 to approve surcharges on electricity bills to generate about $300 million annually for its reactors. The utility’s CEO, Chuck Jones, said it was needed to protect jobs and the state's largest clean energy source, saying “this is not a bailout for FirstEnergy.”

Republicans in the Legislature blocked the proposal from moving forward. Then-Gov. John Kasich had no interest either, saying the utility needed to figure out how to keep its nuclear plants operating without the state's aid.

With little hope in sight, FirstEnergy announced in early 2018 that it planned to close its nuclear plants within three years, leaving the door open to change its decision if the state Legislature came to the rescue.

Just months after taking over the GOP-controlled Ohio House, Speaker Larry Householder in early 2019 unveiled a plan to save the nuclear plants and eliminate incentives promoting wind and solar power. It would steer the state in the right direction, he said.

The two small communities where the plants operate said they feared that losing them and the tax money they generate would be devastating for schools, safety services and programs for children and seniors.

But the state's business and environmental groups joined in opposition to the bailout. So did some conservatives who were against picking winners and losers in the energy market.

How important was that vote? Ohio House leaders almost sent a state-owned airplane to Chicago to bring back lawmakers from a conference in Chicago so they could vote on the bill after it had fallen short of needed votes days earlier.

It was no secret that millions were being spent to persuade lawmakers to support the bill and keep a repeal effort off the statewide ballot last year. But it wasn't until just two weeks ago that federal authorities said it involved illegal activity that began in 2017.

Householder’s strategy, according to a federal complaint, was to pick freshman legislators he’d help elect to sponsor the bill, create a new subcommittee comprised mostly of his supporters who would push the legislation forward, and engage in an expensive media blitz to pressure public officials to back it.

Federal prosecutors allege Householder then used “pressure tactics” to get the bill passed, strong-arming his own House members and senators to vote in favor.

In exchange, investigators said a dark money group Householder controlled received $60 million from a unidentified company, which the complaint makes clear is FirstEnergy and its affiliates.

Householder and his attorney have not commented since his arrest. FirstEnergy's CEO has said he and the company did not do anything wrong.

Ohio’s governor is calling on the Legislature to repeal the bailout and replace it, saying he still believes the nuclear plants are an important part of the state’s energy future.

Fellow Republican Bob Cupp, a veteran lawmaker from Lima who was chosen this past week to become the new House speaker after lawmakers booted Householder from the job, said one of his first priorities will be to do away with the legislation and start anew.

But some lawmakers, including those who voted for the bailout last time around, want nothing to do with it again.

“We should not get in the habit of rewarding illegal behavior,” said Republican Sen. Jay Hottinger, of Newark.

He thinks the nuclear plants are worth maintaining because they still produce 15% of the state's energy, provide good jobs and generate millions for their local communities. But he said Friday he can't get past that “the process was so polluted, tainted, illegal, inappropriate — however you want to call it.”