It was the first time a privately built and owned spacecraft carried astronauts to the space station. 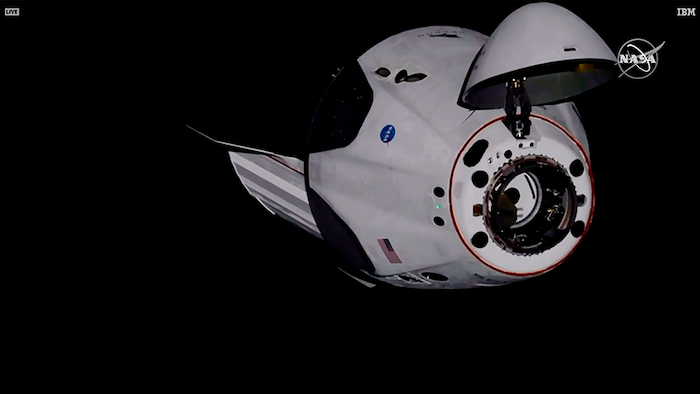 In this image provided by NASA, the SpaceX Dragon crew capsule, with NASA astronauts Doug Hurley and Robert Behnken aboard, docks with the International Space Station Sunday, May 31, 2020.
NASA TV via AP

CAPE CANAVERAL, Fla. (AP) — SpaceX delivered two astronauts to the International Space Station for NASA on Sunday, following up a historic liftoff with an equally smooth docking in yet another first for Elon Musk’s company (view photos in gallery).

With test pilots Doug Hurley and Bob Behnken poised to take over manual control if necessary, the SpaceX Dragon capsule pulled up to the station and docked automatically, no assistance needed. The hatches swung open a few hours later, and the two Dragon riders floated into the orbiting lab and embraced the three station residents.

Unlike the SpaceX and NASA flight control rooms, where everyone was spaced well apart, there was no social distancing or masks needed in orbit since the new arrivals had been in quarantine for many weeks.

“The whole world saw this mission, and we are so, so proud of everything you have done for our country and, in fact, to inspire the world,” NASA Administrator Jim Bridenstine said in a call from Mission Control in Houston.

Hurley credited SpaceX and added, ““It's great to get the United States back in the crewed launch business.”

It was the first time a privately built and owned spacecraft carried astronauts to the space station in its more than 20 years of existence. NASA considers this the opening volley in a business revolution encircling Earth and eventually stretching to the moon and Mars.

“NASA is not going to purchase, own and operate rockets and capsules the way we used to," Bridenstine said. “”We’re going to partner with commercial industry.” 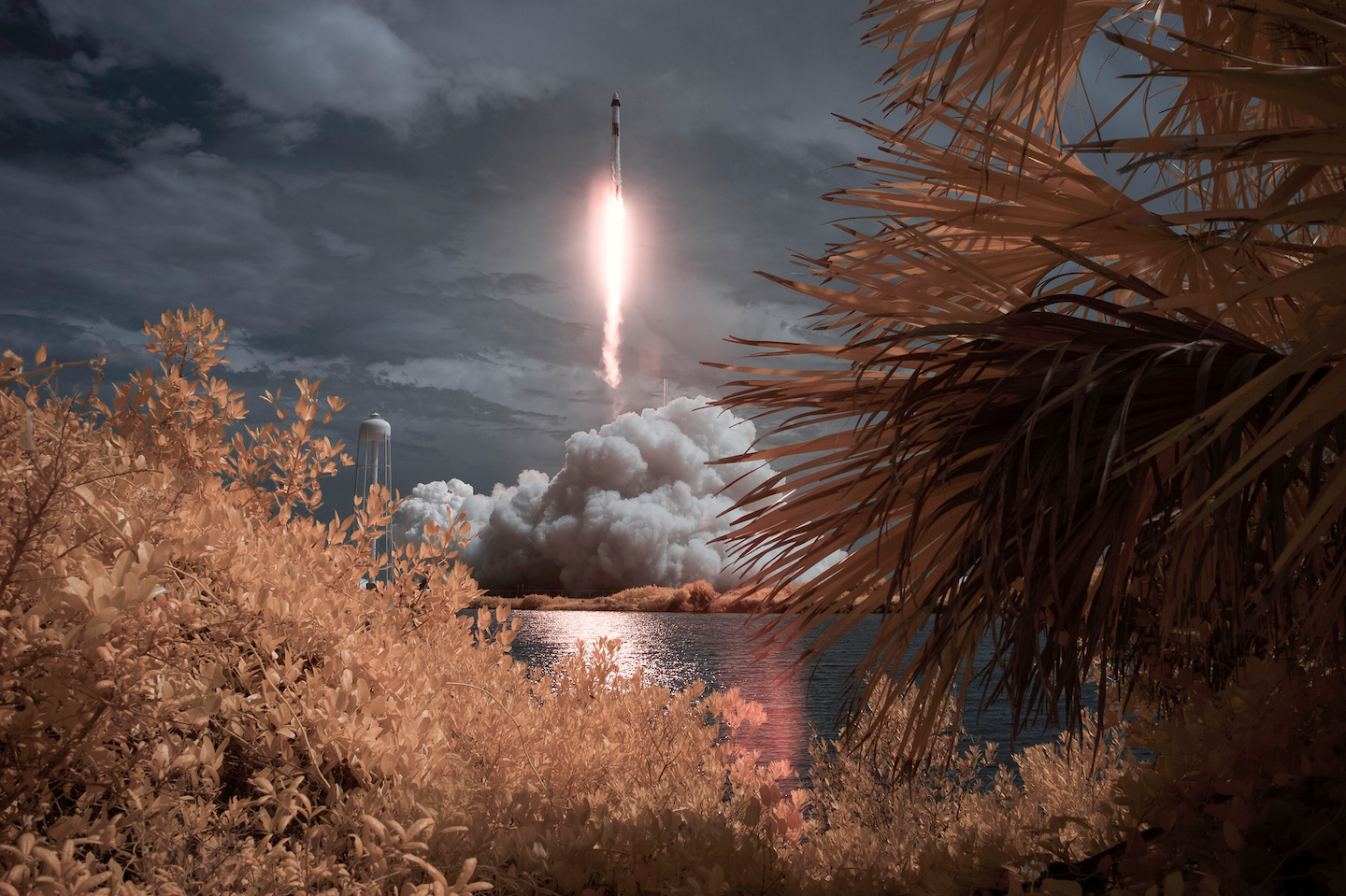 In this photo provided by NASA, a SpaceX Falcon 9 rocket carrying the company's Crew Dragon spacecraft is seen in this false color infrared exposure as it is launched on NASA's SpaceX Demo-2 mission to the International Space Station with NASA astronauts Robert Behnken and Douglas Hurley onboard, Saturday, May 30, 2020, at NASA's Kennedy Space Center in Cape Canaveral, Florida.Bill Ingalls/NASA via AP

Despite the coronavirus pandemic, thousands jammed surrounding beaches, bridges and towns as SpaceX ended a nine-year launch drought for NASA. The achievement, years in the making, is expected to drive down launch costs so more people might be able to afford a ticket to space in the coming years.

Behnken told the welcoming committee at NASA's Johnson Space Center that the Dragon was “a slick vehicle” and said he was surprised at how rough the ride was on the latter part of ascent, compared with the space shuttle, which he and Hurley rode twice.

“Dragon was huffing and puffing all the way into orbit,” he said.

Two Texas members of Congress at Johnson for the docking — Sen. Ted Cruz and Rep. Brian Babin — said the flight offered inspiration and hope during a particularly tough time of protests and pandemic.

“Having it go off without a hitch was a tremendous blessing for our country,” Babin told the astronauts.

Gleaming white in the sunlight, the Dragon was easily visible on NASA TV from a few miles away from the space station, its nose cone open and exposing its docking hook as well as a blinking light. Hurley and Behnken took over the controls and did a little piloting less than a couple hundred yards (meters) out as part of the test flight, before putting it back into automatic for the final approach.

Once on board the space station, Hurley said the capsule, newly named Endeavour after the retired shuttle, handled extremely well. He was the pilot on the last U.S. spaceship to visit the space station — the last shuttle flight, by Atlantis, in July 2011.

Restoring American launch capability nine years later, he noted, “is just one effort that we can show for the ages in this dark time that we’ve had over the past several months to kind of inspire, especially the young people in the United States, to reach for these lofty goals.”

There was one small glitch: Hurley bumped his head entering the space station and frequently wiped his forehead during the welcoming ceremony. 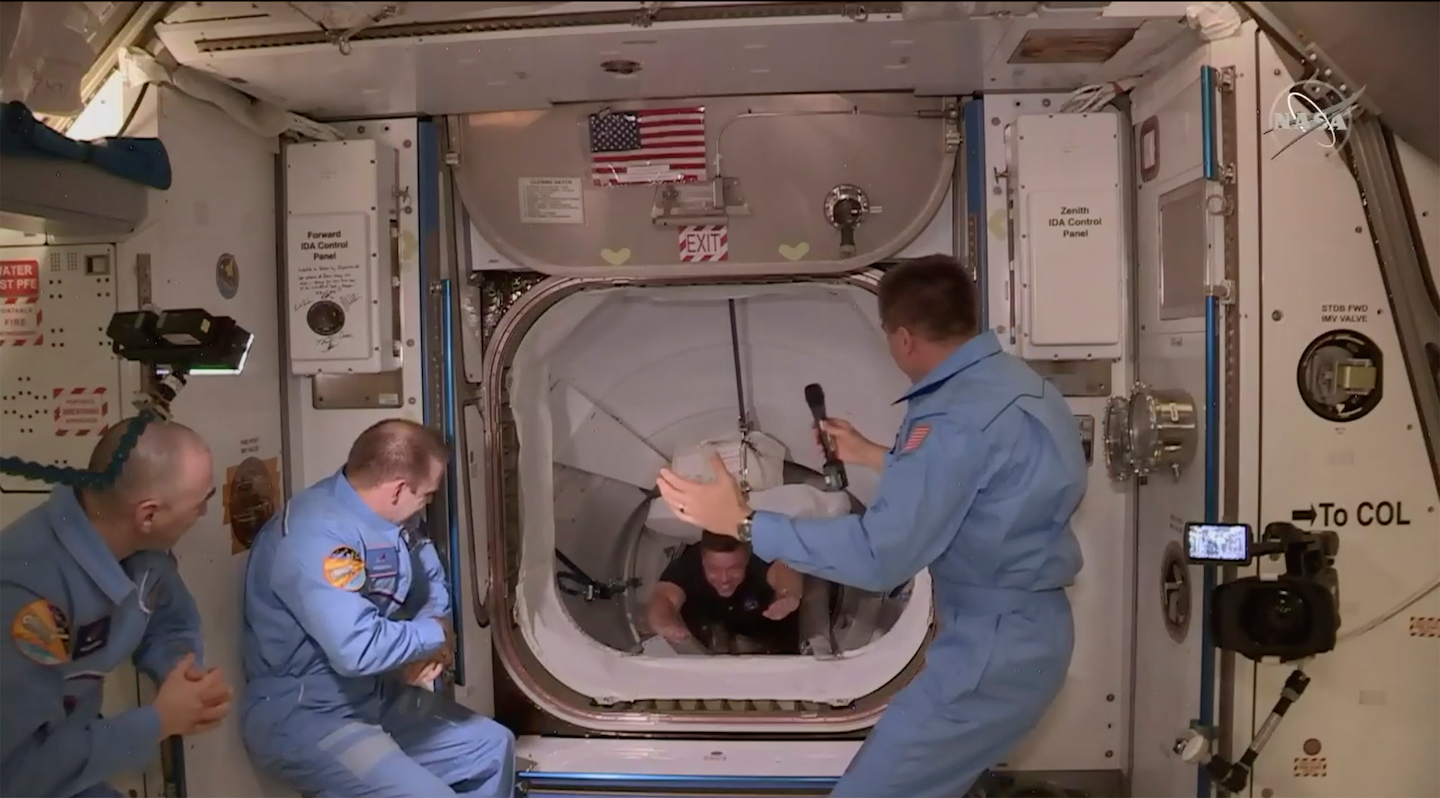 This photo provided by NASA shows the crew of SpaceX entering the International Space Station, Sunday, May 31, 2020. The Dragon capsule arrived Sunday morning, hours after a historic liftoff from Florida. It's the first time that a privately built and owned spacecraft has delivered a crew to the orbiting lab.NASA via AP

Until Saturday, SpaceX had launched only space station supplies or satellites. The company's employees took to calling the astronauts “dads” to drive home the fact that two lives were at stake in this highly technical effort.

NASA has yet to decide how long Hurley and Behnken will spend at the space station, somewhere between one and four months. While they’re there, they'll join NASA's Chris Cassidy and two Russian station residents in performing experiments and possibly spacewalks to install fresh station batteries.

While U.S. astronauts will continue to catch a ride on Russian Soyuz rockets, it will be through a barter system now that NASA's commercial crew program has finally taken flight. NASA had been shelling out tens of millions of dollars for every Soyuz seat.

In a show-and-tell earlier Sunday, the astronauts gave a quick tour of the Dragon’s sparkling clean insides, quite spacious for a capsule.

The blue sequined dinosaur accompanying them — their young sons’ toy, named Tremor — was also in good shape, Behnken assured viewers. Tremor was going to join Earthy, a plush globe delivered to the space station on last year’s test flight of a crew-less crew Dragon. Behnken said both toys would return to Earth with them at mission’s end.

An old-style capsule splashdown is planned.

After liftoff, Musk told reporters that the capsule’s return will be more dangerous in some ways than its launch. Even so, getting the two astronauts safely to orbit and then the space station had everyone breathing huge sighs of relief.

As always, Musk was looking ahead.

“This is hopefully the first step on a journey toward a civilization on Mars,” he said Saturday evening.