The chemicals were found in water and soil as far as 30 miles from the plant. 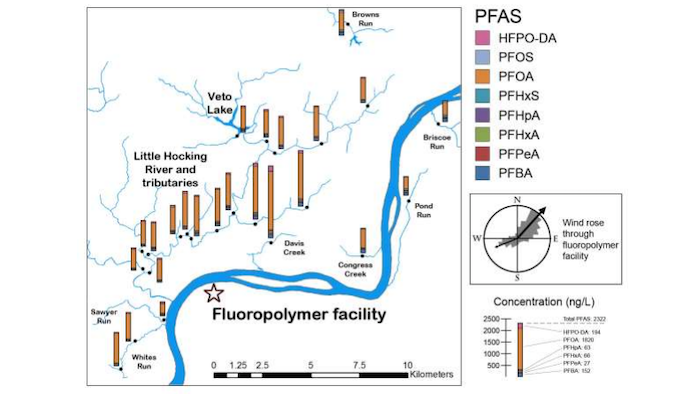 Concerns about environmental and health risks of some fluorinated carbon compounds used to make non-stick coatings and fire-fighting foams have prompted manufacturers to develop substitutes, but these replacements are increasingly coming under fire themselves.

To get a handle on the scope of the problem, scientists have been studying how widely these chemicals have contaminated the environment. Now, researchers report in ACS' Environmental Science & Technology that, in one case, they have dispersed more broadly than previously realized.

These per- and polyfluorinated alkyl substances, known as PFAS, include perfluorooctanoic acid (PFOA). Because of exceptional stability, these chemicals don't break down, so they can linger in soils and rivers if released into the environment, and they can persist in the body if ingested.

Possible health effects include cancer, liver toxicity and disruption of the immune, endocrine and reproductive systems. As an alternative, industry has turned to other PFAS thought to be less likely to bioaccumulate, such as hexafluoropropylene oxide dimer acid (HFPO-DA), though their potential toxicity is unknown.

Prior studies documented historical PFOA contamination mainly west and southwest of a fluoropolymer production facility in Parkersburg, West Virginia, that switched from PFOA to HFPO-DA in 2013.

Linda Weavers and colleagues wanted to assess ongoing impacts from the plant on a broader scale, including areas north and northeast of the facility. In addition, the researchers wanted to check for dispersal of HFPO-DA, for which little environmental information is available.

The findings suggest HFPO-DA, like PFOA, could get into groundwater, and that these PFAS are being carried outside current surveillance zones. The researchers recommend more widespread monitoring of surface and drinking water to better define how and where PFAS exposures are occurring.