Airbus Cuts Production by a Third

Demand for aircraft and travel has plummeted. 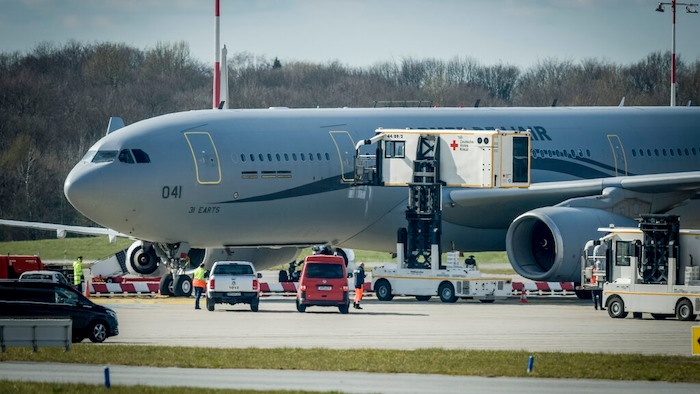 An Airbus A330 of the French Air Force is on display at the Airport of Hamburg, Germany, Tuesday, March 31, 2020. The plane will fly six corona patients who need to be ventilated to Germany for treatment. In order to slow down the spread of the coronavirus, the German government has considerably restricted public life and asked the citizens to stay at home. The new coronavirus causes mild or moderate symptoms for most people, but for some, especially older adults and people with existing health problems, it can cause more severe illness or death.
Axel Heimken/dpa via AP

LONDON (AP) — European planemaker Airbus said Wednesday it is reducing production by about a third as demand for aircraft and travel plummets due to the coronavirus pandemic.

The company said it delivered 122 planes in the first quarter, but 60 remain undelivered. It delivered only 36 in March, down from 55 in February, as airlines asked to suspend orders while facing huge costs related to a near-total shutdown of air travel.

“We are adapting production to the new reality of the airlines,” Airbus CEO Guillaume Faury said. “We are all going through an unprecedented situation and we want to do this together as much as possible.”

Faury was unable to indicate how long the production cuts would last, saying only that Airbus would review its output on a monthly basis.

“It is not unlikely that aviation will look different after this COVID-19 crisis,” he said.

The company said it was keeping tight control on its own costs and has not yet applied for government support, but said it might seek to tap European government programs that help pay the salaries of workers put on temporary leave.