Many Businesses Cautious About Restarting Economy

President Donald Trump wants the country open for business by mid-April, but some experts warn it's not as easy as flipping a switch. 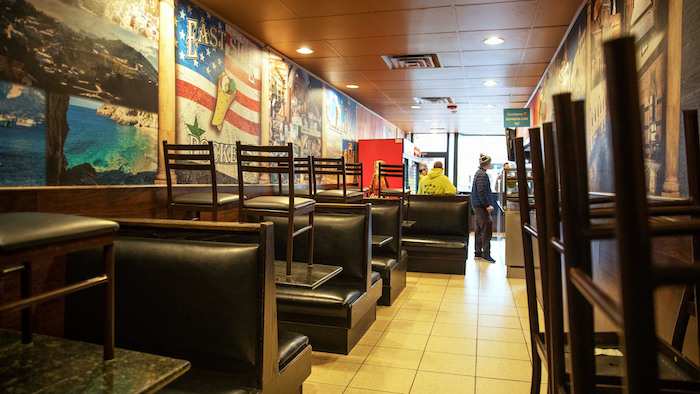 The dining section is closed off at East Side Pockets, a small restaurant near Brown University on Wednesday March 25 in Providence, RI. President Donald Trump wants the country open for business by mid-April, but some experts warn it's not as easy as flipping a switch: Economies run on confidence, and that is likely to be in short supply for as long as coronavirus cases in the United States are still rising.
AP Photo/David Goldman

PROVIDENCE, R.I. (AP) — President Donald Trump wants the country open for business by mid-April, but some experts warn it's not as easy as flipping a switch: Economies run on confidence, and that is likely to be in short supply for as long as coronavirus cases in the United States are still rising.

Trump this week said he wants businesses “opened up and just raring to go by Easter,” which falls on April 12. That contradicts many public health experts, who warn that restrictions should only be lifted gradually and once more data about infection rates is available. They expect efforts to curb the disease will continue for several months at least.

Despite wild swings in financial markets and signs that unemployment is surging — both of which could hurt Trump in an election year — many businesses say it's not clear that reopening will be even an option in a few weeks: They have to follow the orders set in each state, and many of those are open ended or could be extended at any time. They are worried that opening too soon could be seen as irresponsible. And even if they did reopen, would customers come if the virus isn't under control? 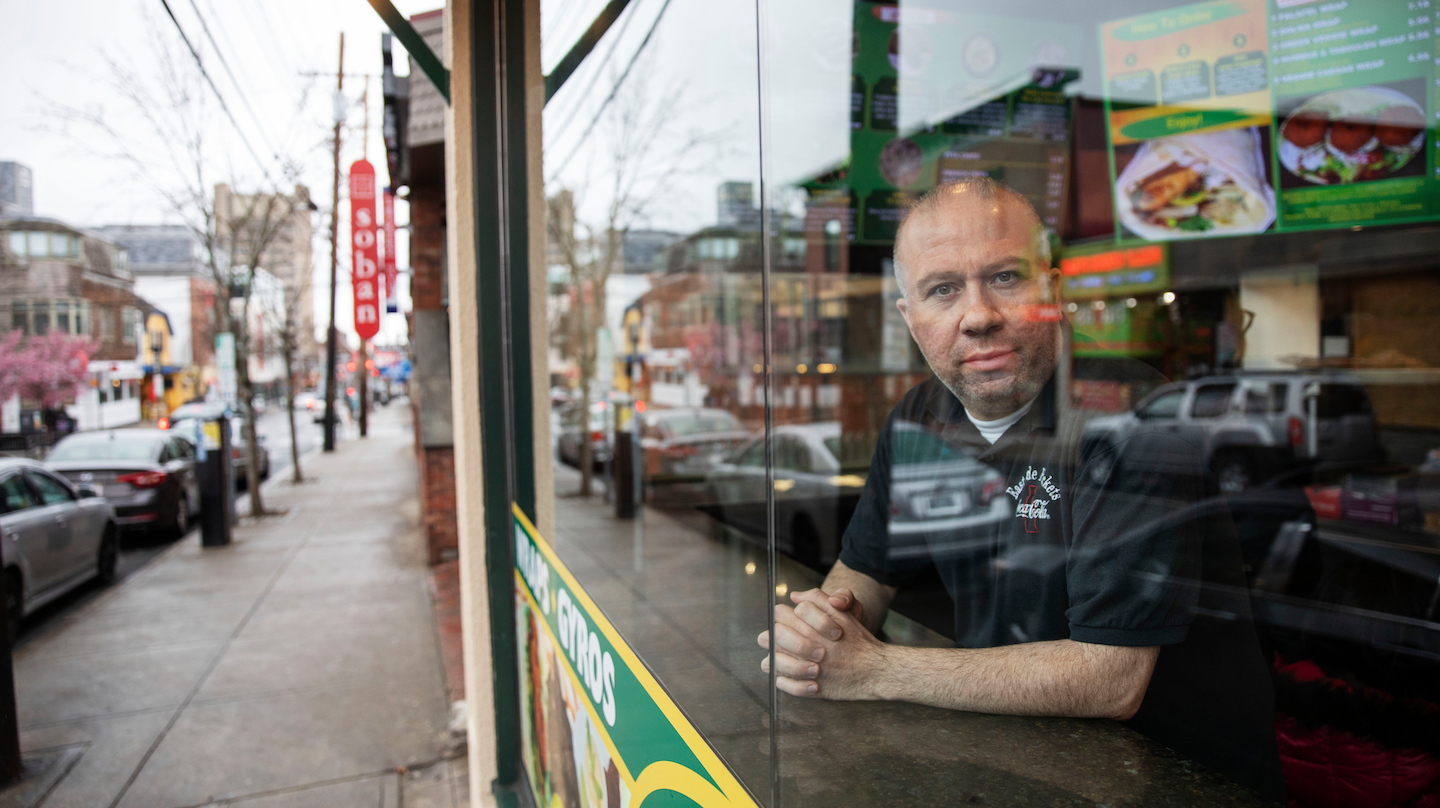 Paul Boutros, owner of East Side Pockets, a small restaurant near Brown University, looks out onto an empty street since students were sent home two weeks ago on Wednesday, March 25 in Providence, R.I.Associated Press“He’s not being realistic. How can you open if the cases are climbing day after day?” asked Paul Boutros, who owns East Side Pockets, a small restaurant that has lost most of its business since nearby Brown University sent students home two weeks ago.

Business groups, including the U.S. Chamber of Commerce and the National Federation of Independent Business, are cautious. They say reopening is a call health experts will have to make; in the meantime, they're focused on getting financial help for businesses.

Some business leaders and workers, of course, back the idea of a shorter shutdown. In a weekend post on Twitter, former Goldman Sachs CEO Lloyd Blankfein said those at lower risk should return to work in a few weeks.

“Extreme measures to flatten the virus ‘curve’ is sensible — for a time — to stretch out the strain on health infrastructure. But crushing the economy, jobs and morale is also a health issue — and beyond,” he said.

Taggart Barron, who is in finance and is working from his home in Bentonville, Arkansas, during the outbreak, said he would go into the office more if he were allowed — and that would mean he would be spending more, too, like on lunches out.

“I worry about the human and economic impact of a forced shutdown with no defined end in sight,” said Barron. “We are killing a fly with a missile.”

New York Gov. Andrew Cuomo — whose dire warnings and sometimes scolding tone in his daily briefings have often made him a foil for Trump during the outbreak — has suggested a staged opening eventually. He said that perhaps younger people who appear to be less affected or people who had recovered from the virus — if scientists are able to confirm that means they have immunity — could start to go back to work.

Cuomo said there was no need to “choose between a smart health strategy and smart economic strategy. We can do both and we must do both.”

For most people, the new coronavirus causes mild or moderate symptoms that clear up in two to three weeks. For some, especially older adults and people with existing health problems, it can cause more severe illness and death.

In Europe, government and industry leaders are debating the extent of the shutdown and which sectors are “essential." In Italy, which leads the world in deaths from the virus, the government is tightening its lockdown further, while French President Emmanuel Macron recently urged employees in key industries to continue showing up for work. Three months after the start of the outbreak in China, business has not yet returned to normal.

But as difficult as it was to shut down large parts of the American economy, restarting them may be even harder, especially if it happens while there is still uncertainty about the outbreak's trajectory. If a restart comes too early, it could also further fuel the pandemic, in which more than 20,000 people have already died globally.

Economic research on previous pandemics that weren't as severe has found that people voluntarily pulled back on shopping, travel and other activity to avoid exposure from crowds, according to Constance Hunter, chief economist at KPMG. So consumer spending would likely remain weak even if businesses largely reopened.

“It’s very tough to say to people, ‘Hey, keep going to restaurants, go buy new houses, ignore that pile of bodies over in the corner. We want you to keep spending because there’s some politician who thinks GDP growth is what really counts,''” Bill Gates, a major philanthropist to global public health efforts, said in an interview that was part of a series organized by TED.

The travel industry, for one, expects that even if severe restrictions are lifted after three months, demand for air travel will be weakened by the loss of jobs and consumer confidence, according to an analysis released Tuesday by the International Air Transport Association, an industry trade group. The association expects global passenger demand to be down 65% in the April-June period. By the fourth quarter, that could narrow to a 10% decline, the group said.

There are also added burdens on workers these days that could make a partial reopening difficult. Many people in the workforce have family members at home that might need care or who are vulnerable to the virus or the workers may themselves be quarantined, noted Laurie White, president of the Greater Providence Chamber of Commerce. In many places, schools are closed for the foreseeable future, so caring for their children may prevent some from returning to work.

The cost of the virus will have to be paid one way or another, said Gabriel Ehrlich, director of the Research Seminar in Quantitative Economics at the University of Michigan. We can pay it now, by using shutdowns to slow down the virus' spread while we ramp up our ability to manage it, or later, in the form of increased public health costs if infections surge.

“I don’t want to downplay or minimize the fact that there are really substantial economic costs,” Ehrlich said. “But the reality is getting the disease under control is also beneficial for the economy.”

James Mark, who owns the restaurants North and Big King in Providence, said pushing to restart the economy before the health crisis is over would put businesses like his in a terrible position. As things are now, there’s some leverage for small businesses to negotiate with landlords or banks over rents, mortgages and debt payments. If things reopened while the coronavirus was still spreading, he’d be under pressure to put his staff and customers at risk to pay those bills.

“I don’t think there’s any economic solution until the health side of this gets solved,” Mark said. “We can’t rush this.”