Following government instructions, factory operators are buying face masks by the thousands and jugs of disinfectant. 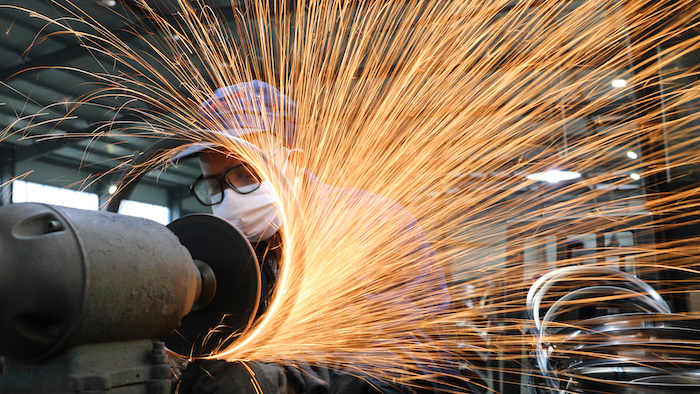 BEIJING (AP) — To keep his 40 employees indoors and away from China’s virus outbreak, the manager of an electronics factory in Dongguan, near Hong Kong, says he hired a cook and arranged dormitories for them.

Cjtouch Electronic Co., which makes smartphone touch screens, is one of thousands of manufacturers trying to protect employees while they gradually reopen after anti-virus controls shut down much of the world’s second-largest economy.

Trying to curb the soaring cost of anti-virus controls, the ruling Communist Party has told local officials in areas deemed at low disease risk to help reopen factories that make the world's smartphones, toys and other consumer goods.

They were idled when Beijing extended the Lunar New Year holiday to keep workplaces empty in hopes of containing the virus that emerged in central China in December. Offices, restaurants, cinemas and shopping malls also were closed.

Officials have orders to prevent a spike in infections as millions of workers who returned to their hometowns for the holiday flow back to China’s southeastern factory belt and big eastern cities.

Following government instructions, factory operators are buying face masks by the thousands and jugs of disinfectant. Employees are scrutinized for the virus’s telltale fever.

Some manufacturers bar outsiders. Others remain closed due to a lack of employees or raw materials.

Cjtouch is in Guangdong province, home to thousands of export-driven factories. It is back to 90% of normal production, Zhang said. In the three weeks since it reopened employees have used more than 3,000 masks, he said.

“We hired someone to cook for employees so they don’t need to eat outside and persuaded them to stay in dormitories and not go out,” Zhang said.

The government has told anyone who can work from home to stay there, but factories need employees on their assembly lines.

Some still are stranded in their hometowns by the suspension of bus and train service or curbs on leaving areas deemed at high disease risk.

Mingliang Electronics Co. in the eastern city of Weifang in Shandong province resumed work this week with 20 of its 30 employees, said a manager who would give only her surname, Liu. The company makes circuit boards for U.S., European, South Korean and Japanese customers.

“The rest cannot make it due to restrictions on movement ordered by local authorities in the countryside,” said Liu.

Those who are at work wear masks and are checked twice a day for fever, Liu said.

“We keep the place clean by disinfecting three times a day, mopping the floor and wiping computer screens with disinfectant,” she said. “We ordered nearly 2,000 masks for employees.”

The Yayuan Toy Factory, which makes plastic cars in the southeastern city of Yiwu, a hub for export manufacturers, still is shut down due to virus fears and the difficulty of finding employees, according to its owner, Cui Ting.

Cui said his workforce of 12 went home to Shanxi province in western China and Guizhou in the southeast for the holiday and have yet to return.

“We haven't resumed production yet, because I still worry about the infection risk due to asking my employees to travel,” said Cui.

Cui said he expects to get new orders in a few weeks but is in no hurry.

Despite the renewed activity, forecasters say China's economic growth will be flat to negative for the three months ending in March, a marked decline from the previous quarter's 6% growth.

Travel disruptions also are raising costs for manufacturers that have to pay higher wages to get or keep scarce employees.

The government has promised tax breaks, low-interest loans and other aid, but it is unclear how many companies might shut down for good due to the burden of paying rent and other expenses with no revenue.

Yinhong Protective Product Co. in the city of Xiantao in Hubei, the province at the center of the outbreak, is paying “super high” wages of up to 1,800 yuan ($250) a day to attract workers, said its sales manager, Chen Jihao.

Demand for masks, protective clothing and disinfectant is soaring, but producers aren’t reaping a windfall. Chen said Yinhong’s output has increased by 20% to 1.2 million masks per day, but the government pays below-market prices.

Lesen Xiping Electronics Co. in the southern province of Hunan, which makes cosmetics equipment, is paying more for labor and for materials including LED display panels, said its sales manager, Flora Fang.

“We are paying extra to keep workers under the current circumstances,” Fang said.

The company, which exports to the United States, Germany and Mexico, requires its workforce of 20 to wear masks and disinfects its factory daily.

“We do hope that everything will return to normal by the end of April,” she said.