In the fourth quarter of the year the Stuttgart-based company lost 11 million euros. 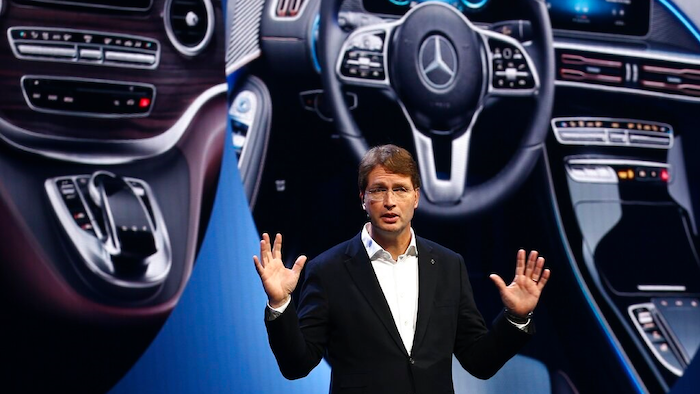 Ola Kallenius, Chairman of the Board of Management Daimler AG and Mercedes-Benz AG, talks about future innovation of the car maker at the world premiere of the Mercedes-Benz Vision AVTR concept car announcement during the Daimler Keynote before the CES tech show Monday, Jan. 6, 2020, in Las Vegas.
AP Photo/Ross D. Franklin

FRANKFURT, Germany (AP) — Daimler AG, maker of Mercedes-Benz cars, saw profit slump in 2019 and turned in a loss for the fourth quarter, underlining the pressures on the auto industry from economic headwinds and the need to invest in electric cars to meet tougher European Union limits on greenhouse gases

The company also saw deductions to earnings from regulatory troubles regarding the emissions of its diesel cars.

Net profit for the full year fell to 2.71 billion euros ($2.94 billion) from 7.58 billion euros. In the fourth quarter of the year the Stuttgart-based company lost 11 million euros, compared with a profit of 1.64 billion euros in the year-earlier quarter. The company said it would cut its dividend to 90 euro cents for the year, from 3.25 euros in 2018.

CEO Ola Kallenius said “we cannot be satisfied” with the results but added that the company was on track to cut costs and improve its earnings performance.

Earnings slipped despite an increase in unit sales and revenue at the Mercedes-Benz division, a main pillar of the company's profits. Revenue increased by 1% to 93.87 billion euros. But operating earnings at the division fell by more than half to 3.35 billion euros from 7.21 billion in 2018 as the company spent more on new models and technology and set aside more for diesel troubles. The company's diesel emissions practices are under investigation in the U.S. and Germany and it faces civil lawsuits over cars that litigants claim emitted more pollutants than advertised.

The company also faces uncertainty about the impact from the spread of the new coronavirus, which has sickened thousands of people in China and led to widespread business closures. Kallenius said that the company was bringing its Chinese factories back online but that the virus's impact remained uncertain.

Daimler said in November that it intended to cut 1.4 billion euros in costs by the end of 2022 and says that thousands of positions will be eliminated though it has not specified a number.

Kallenius said that the management team was “committed to unlock cash flow so that we can make the investments we need” as the company moves toward carbon-neutral mobility.

The European Union is introducing tougher limits from 2021 on automobile emissions of carbon dioxide, the primary greenhouse gas blamed by scientists for trapping the sun's energy in the atmosphere and causing global warming. Automakers are being forced to roll out more low- or zero emissions vehicles to meet fleet average requirements even though such cars are only a small part of the market so far. Failure to meet the requirements means heavy fines.

China is also pushing carmakers to sell more electric and hybrid cars. Meanwhile, companies are investing in digital services such as car-sharing and ride-hailing through smartphone apps.

This is happening as demand for cars is slowing. Europe's auto association says sales will shrink by 2% this year and sales have slowed in China, the world's largest car market.