Monica Mathis was living in Iowa when her dog Hazel disappeared in 2017. 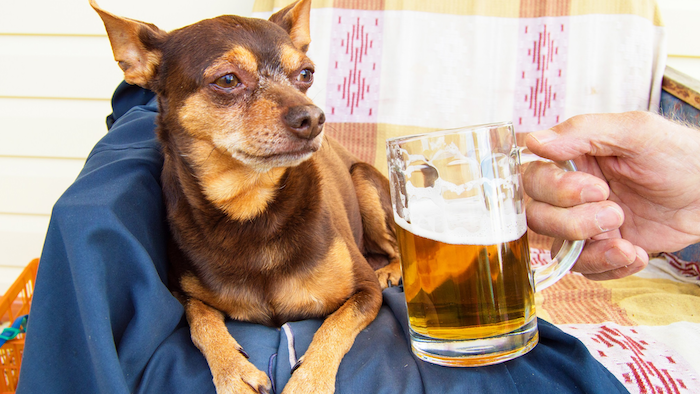 Earlier this month, Motorworks Brewing in Bradenton teamed up with the Manatee County Animal Shelter to turn beer cans into adoption flyers for shelter dogs. Monica Mathis of St. Paul, Minnesota, told KSTP that she couldn't believe it when she spotted Hazel's face on a beer can that had been photographed and posted on social media.

Hazel, a terrier mix, was among the dogs featured on beer cans called “The Four Packs.”

Mathis saw the post and something about one dog's eyes caught her attention.

“Oh my gosh that looks like my dog, I think that's my dog,'" Mathis said. But the featured dog's name was Day Day.

Mathis contacted the shelter, which needed proof that Day Day was in fact Hazel.

"I sent everything I could find — all the pictures so I could stop an adoption process from happening because I could've lost her again," Mathis said.

Mathis said she was living in Iowa when Hazel disappeared in 2017.

"She was on a leash outside and I went to get her and she was gone from our yard," Mathis said. She searched, called shelters, but never found the dog.

She said she has no idea how the dog got to Florida.

Then, a new job took her to Minnesota. Several years went by until she saw the beer can campaign on Jan. 24.

The shelter confirmed that Day Day is Hazel.

“I was amazed, I was crying. An emotional wreck," Mathis said.

Mathis said animal services couldn't immediately find her because the contact information on Hazel's microchip was out of date.

“Keep track of exactly what company you use, make sure your stuff gets updated, especially if your pet goes missing and don’t ever give up,” Mathis said.

“This dog was such an important part of her family that she had everything to prove she was her owner,” Wohlgefahrt said. “There was really no way we could trace her back to that particular owner. It’s a great reminder to people when they do these things to go into their profile and make sure all their contact information is up to date.”

The nonprofit Friends of Manatee County Animal Services will cover the cost of transporting Hazel to Minnesota, which Mathis says will be in time to celebrate the dog's seventh birthday.