Max Not Expected to be Cleared Until Summer

That timetable — the latest of several delays in the plane's approval process — will create more headaches for airlines. 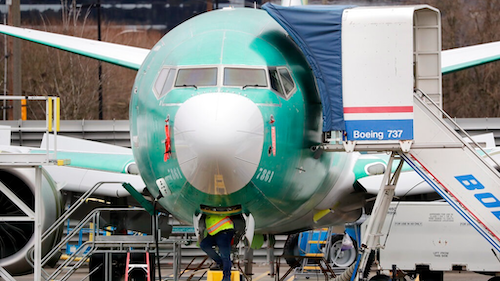 In this Dec. 16, 2019, file photo a worker looks up underneath a Boeing 737 MAX jet in Renton, Wash. Boeing doesn't expect federal regulators to approve its changes to the grounded 737 Max until this summer, according to two people familiar with the matter.
AP Photo/Elaine Thompson, File

Boeing said Tuesday that it doesn't expect federal regulators to approve its changes to the grounded 737 Max until this summer, several months longer than the company was saying just a few weeks ago.

That timetable — the latest of several delays in the plane's approval process — will create more headaches for airlines by pushing the Max's return further into the peak summer travel season or possibly beyond it.

The company said regulators will decide when the Max flies again but that it periodically gives airlines and suppliers its best estimate of when that will happen.

“This updated estimate is informed by our experience to date with the certification process,” Boeing said in a statement. “It is subject to our ongoing attempts to address known schedule risks and further developments that may arise in connection with the certification process. It also accounts for the rigorous scrutiny that regulatory authorities are rightly applying at every step of their review” of the plane’s flight controls and pilot-training requirements.

The latest timetable is based on work remaining to be done before the Federal Aviation Administration will allow the Max back in the sky including work on flight-control computers, according to two people familiar with the matter, who spoke on condition of anonymity to discuss details that Boeing did not provide.

The FAA said in a statement that it is conducting “a thorough, deliberate process” to make sure that Boeing’s changes to the Max meet certification standards. The agency said, as it has for months, that it has no timetable for completing its review.

The three U.S. airlines that own Maxes — Southwest, American and United — have scrubbed the plane from their schedules until early June. It is possible, however, that they won't use the planes until much later, possibly after the busy summer travel season is over.

Even after the FAA certifies Boeing's work, airlines will need several more weeks to prepare their grounded planes and train pilots. After long insisting that training could be done quickly on tablets, Boeing recently reversed course and recommended that pilots go through sessions on flight simulators before operating the plane, adding more time to airline preparations.

Shortly after the first Max crash in October 2018 in Indonesia, Boeing began updating software that investigators say was triggered by a faulty sensor and pushed the plane’s nose down. Then in March 2019, another Max crashed in Ethiopia. In all, 346 people died.

Boeing has made the software less powerful and tied it to two sensors instead of one. That work was done months ago, but the company is still working on changes to flight-control computers and pilot-training requirements. Another software issue was discovered last week, although one of the people familiar with the situation said it would not cause more delay in the plane's return.

News of the latest delay in Boeing's timing was first reported by CNBC.

Shares of Chicago-based Boeing Co. fell $10.87 to close at $313.28. Trading was briefly halted before the company issued its announcement about the Max.