The FBI said he allegedly broke into a lab and stole the toxic metal before spilling it in several Houston locations. 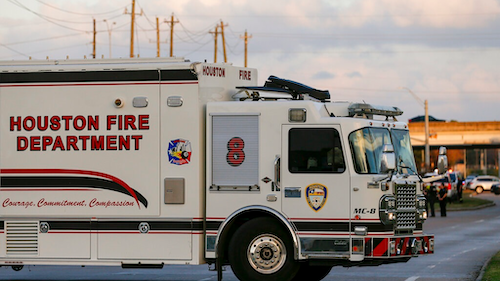 In this Sunday, Dec. 15, 2019 photo, officials respond to the scene of a mercury spill on the intersection of Westview Drive and West Sam Houston Parkway North. A person has been taken into custody for questioning after dozens of people were decontaminated as a precaution due to trace amounts of mercury spilled at three locations in Houston, the FBI said Monday.
Godofredo A. Vásquez/Houston Chronicle via AP

HOUSTON (AP) — A 19-year-old man was arrested Monday after mercury was found spilled in Houston parking lots, leading dozens of people to be decontaminated as a precaution, authorities said.

The FBI's Houston office said Christopher Lee Melder had been charged with burglary and unlawful disposal of hazardous material. The FBI said he allegedly broke into a lab and stole the toxic metal. The FBI didn't release the lab's name or location.

Melder was also charged on an outstanding felony drug possession warrant. It wasn't immediately known whether he had a lawyer and authorities didn't immediately say if the spills were intentional.

On Sunday, less than a pint of mercury was found spilled in the parking lots outside three businesses located near one another: a Walmart, a Sonic Drive-In and a Shell gas station.

Health department spokesman Porfirio Villarreal said it wasn't clear whether the mercury detected inside the Walmart was from an additional spill or from being tracked there by people's shoes.

Dr. David Persse of the health department said “the threat to the general public remains minimal.”

Officials said that on Sunday about 60 people were found to have trace amounts of mercury contamination near their feet and were decontaminated at the scene as a precaution. The health department said they were decontaminated even though the level of chemical detected was below what's dangerous to the average person.

Houston's Office of Emergency Management spokesman Cory Stottlemyer said that in order to be decontaminated, people had to remove their clothes and shoes and take a shower on site. They were then given clothing to leave in.

Officials said one woman was taken to a hospital as a precaution because she was pregnant, and 12 were evaluated at the scene and released.

The health department said Monday evening that new information indicates the spills could have happened as early as Friday. Authorities had said earlier they were looking into reports that someone checked into a hospital Friday in Harris County, where Houston is located, claiming to have been exposed to mercury.

The health department said all the affected businesses remain closed as the cleanup continues.

Mercury is a heavy, silvery liquid that occurs naturally in the earth's crust and is used in such things as thermometers, batteries and fluorescent light bulbs. It's a potent neurotoxin, but health effects depend on how much mercury a person is exposed to, how long they're exposed and their age. Small children are most vulnerable.