When finished, the new software will give Boeing a complete package for regulators to evaluate as the company tries to get the Max flying again. 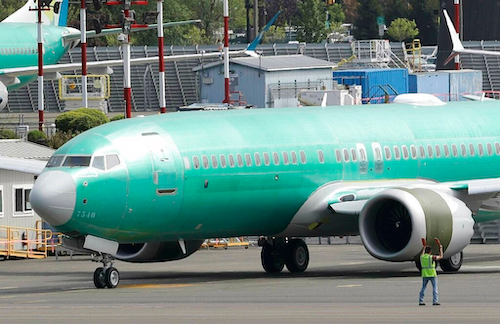 Boeing is working on new software for the 737 Max that will use a second flight control computer to make the system more reliable, solving a problem that surfaced in June with the grounded jet, two people briefed on the matter said Friday.

When finished, the new software will give Boeing a complete package for regulators to evaluate as the company tries to get the Max flying again, according to the people, who didn't want to be identified because the new software hasn't been publicly disclosed.

The Max was grounded worldwide after crashes in Indonesia and Ethiopia that killed a total of 346 people.

Use of the second redundant computer, reported Thursday by the Seattle Times, would resolve a problem discovered in theoretical problem simulations done by the Federal Aviation Administration after the crashes. The simulations found an issue that could result in the plane's nose pitching down. Pilots in testing either took too long to recover from the problem or could not do so, one of the people said.

In the new configuration, both of the plane's flight control computers would be monitored by software instead of the current one, and pilots would get a warning if the computers disagreed on altitude, air speed, and the angle of the wings relative to the air flow, the person said. Only one computer was used in the past, because Boeing was able to prove statistically that its system was reliable, the person said.

The problem revealed in June is similar to the one implicated in the two crashes. That problem was with flight-control software called MCAS, which pushed the nose down based on faulty readings from one sensor. MCAS was installed on the planes as a measure to prevent aerodynamic stalling, and initially it wasn't disclosed to pilots.

The two people briefed on the matter said Boeing has finished updating the MCAS software by scaling back its power to push the nose down. It is also linking the software's nose-down command to two sensors on each plane instead of relying on just one in the original design.

The FAA has been widely criticized for its process that certified the Max as safe to fly, largely because it uses company employees to do inspections that are then reviewed by the agency.