Google Grilled in Congress: What's Ahead for Tech Companies 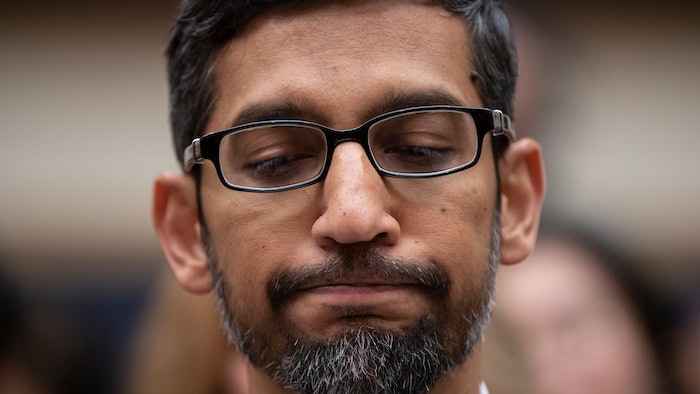 WASHINGTON (AP) — U.S. lawmakers' grilling of Google CEO Sundar Pichai may have sounded like a broken record, but it amplified the prickly issues facing tech companies as Democrats prepare to take control of the House next month.

The 3-1/2-hour hearing Tuesday hit upon familiar themes — online privacy, data protection and the danger of digital monopolies — that are poised to come into even sharper focus next year. Here are some of the hurdles that Google parent Alphabet Inc., Facebook, Amazon and other tech companies are likely to face when the 116th Congress convenes.

Looming over the tech industry is the possibility of government regulation intended to protect people's data. One model for lawmakers may be Europe, where new rules governing data and privacy went into effect this year.

Rep. Ted Poe, R-Texas, tried to pin down Pichai on privacy during Tuesday's hearing. "I've got an iPhone," Poe said, waving his device. "Can Google track me when I move?" If he moved to the left toward his Democratic colleagues on the panel, would Google know? "Not by default," Pichai answered. Poe demanded a yes or no answer, but Pichai indicated it was complicated.

Other lawmakers questioned whether regular people know how much data Google can collect about them and how to stop being tracked. Privacy, of course, is also a huge issue for Facebook, which has spent nearly a year trying to recover from the Cambridge Analytica data mining scandal.

Lawmakers from both parties seem determined to re-examine whether Google rigs its search results to promote its own services and its own political agenda, too. President Donald Trump also has complained about the issue (without evidence ).

European regulators already have concluded Google manipulated its search engine to gain an unfair advantage over other online shopping sites in the lucrative e-commerce market, and fined the company $2.8 billion. Google disputes those findings and is still appealing the decision reached in 2017.

The U.S. Federal Trade Commission opened a similar investigation into Google's business practices in 2011. That probe concluded 19 months later without finding any serious misconduct and didn't require any meaningful changes to how the company operates. But internal documents later surfaced that indicated the FTC's board had brushed off some recommendations of staff lawyers who believed Google was tinkering with its search results in way that stifled competition.

U.S. Rep. David Cicilline, a Democrat from Rhode Island, told Pichai he intended to work with the FTC to draw up a regulatory framework to prevent Google from throttling its rivals through its search engine, which handles two out of every three queries in the U.S.

Numerous lawmakers also asserted that Google uses its search engine as a propaganda machine that highlights news and opinions supporting its own view of how the world should be. The prevailing consensus so far is that the alleged bias most frequently falls on the left-leaning side of most debates, although that pendulum could swing now that Democrats will be the majority party in the House.

But drawing up regulations governing that area of search results would be more likely to raise First Amendment issues, making them even more difficult to impose.

Lawmakers on both sides peppered Pichai with questions about the possibility that Google is considering offering a censored search engine in China after pulling out of that country in 2010 in a high-profile dispute with its communist government's policies. It's not clear what Congress might be able to do to prevent Google from returning to China, but it would certainly trigger more political fireworks.

Pichai acknowledged Google has been exploring a possible search engine in China with a team of engineers that at times has exceeded 100 people, but repeatedly emphasized the company has no plans to release it "right now." If that changes, Pichai promised let lawmakers know about it.

While Republicans on the House Judiciary Committee grilled Pichai on what they perceive as bias against conservatives, top committee Democrat Jerrold Nadler said lawmakers should instead examine issues such as the spread of misinformation online and Russian efforts to influence U.S. elections online.

Given Democrats are poised to take over the House, the use of fake news and misinformation by foreign actors — especially Russia — will likely to continue to be front and center in the coming months, if not years.

Breaking Up is Hard to Do

Governments around the world are becoming increasingly unnerved by the power being amassed by major technology companies — with the dominance of Facebook in social networking, Google in search and Amazon in e-commerce raising the most concerns. That has raised the specter that Trump and Congress might turn up the heat on antitrust regulators to get them to investigate whether consumers and the economy as a whole need to be protected from those companies.

In the most dramatic scenario, a case might be made for breaking the companies into smaller pieces. The premise would be that they have become modern-day trusts similar to what John Rockefeller built through Standard Oil, before the U.S. Supreme Court required it to be dismantled in a 1911 decision that reshaped the business landscape.