Apple Still Strong at 40, But Are Best Years Behind It?

Today, the maker of iPhones and Mac computers is the world's most valuable public corporation, but some critics have suggested Apple's best years are behind it, as it has struggled to come up with new products and match the success of recent years. 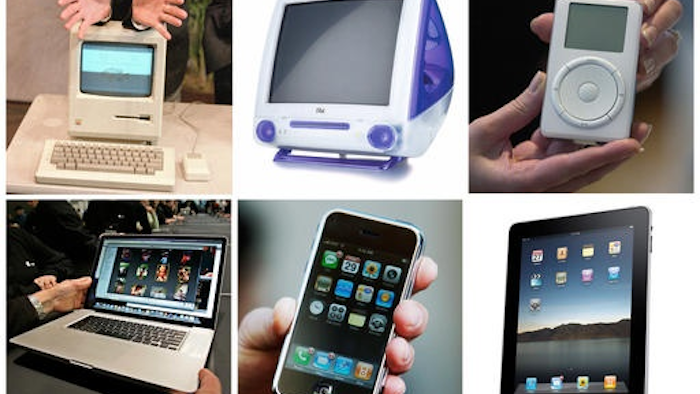 CUPERTINO, Calif. (AP) — Apple turned 40 on Friday, and it's a very different company from the audacious startup that Steve Jobs and Steve Wozniak launched in a Silicon Valley garage in 1976.

Today, the maker of iPhones and Mac computers is the world's most valuable public corporation, with 100,000 employees and a new, multi-billion dollar headquarters in Cupertino, California, set to open next year. But despite its astounding financials — Apple reported $53 billion in profit on $233 billion in sales last year — some critics have suggested Apple's best years are behind it, as it has struggled to come up with new products and match the phenomenal success it has had in recent years.

"We still think we're going to change the world," said Tribble, one of a half-dozen Apple staffers selected by the company to briefly reminisce with reporters this week. Tribble started with Apple in 1980 and worked on the original Macintosh team. He added: "We had no idea back then that Apple would grow to the size that it is."

The company now boasts that more than 1 billion Apple devices — iPods, iPhones, iPads, Macs and Apple Watches — are in regular use around the world. Those products are widely admired and imitated. But Apple depends on the iPhone for two-thirds of its revenue. And after selling a record number of iPhones last year, analysts say sales are leveling off and may even decline this year.

As it enters middle age, Apple may find it difficult to maintain its leadership in the industry. Some experts say it's getting harder to come up with new advances to distinguish Apple's products from those of its competitors.

"Apple is still as good as it used to be, but everyone else has gotten better than they used to be," said James McQuivey, a tech analyst with Forrester Research.

He cited longtime rival Microsoft, once viewed as an industry laggard, but now credited with pioneering tablet computers with detachable keyboards — a category even Apple is embracing with the business-oriented iPad Pro. By contrast, he noted, Apple's latest iPhone is a downsized version of earlier models.

"We've done this more times than anybody else," said Greg Joswiak, a 30-year employee and vice president for product marketing. He listed the iPod, iPhone, iPad, iTunes and the company's online App Store, the new Apple Watch and recent initiatives to create new health-tracking and medical-research apps for the iPhone and Watch.

Apple is widely believed to be exploring new businesses, from electric cars to virtual reality, but analysts say developing products in those categories could take years.

Apple's growth hasn't been smooth. Jobs was forced out in the 1990s, leading to a revolving door for chief executives until he returned in 1997, as the company he co-founded was on the brink of collapse. "There was a time when you were worried about keeping engineers here," said Cheryl Thomas, a vice president for software engineering who joined Apple in 1989.

And in 2000, when the dot-com bubble burst, Joswiak said Jobs refused to cut spending when competitors were tightening their belts. Joswiak said Jobs pledged to "invest in ourselves more than ever before. We then suffered through 11 straight quarters" of dismal financial returns.

Jobs' death from cancer in 2011 led to the elevation of current CEO Tim Cook, who's intense but softer spoken. Tribble credits Cook with maintaining Apple's focus on quality products, even as Cook has taken his own path in running the company.

Far more than Jobs, Cook uses his prominence to speak out on social issues, from global warming to civil rights and individual privacy. He recently challenged the U.S. government in a high-stakes legal dispute over an encrypted iPhone used by an extremist killer. While that drew criticism from top Justice Department officials and GOP presidential contender Donald Trump, Joswiak said he was proud of Apple for taking what he considers a principled stand.

Apple remains one of the most sought-after brands. BAV Consulting, a firm that tracks brand reputation, said that after reaching a low in 2001, just before the iPod came out, Apple is now in the top 1 percent of American brands. And it's in the top 2 percent of brands "being worth paying more for" — which means it can get away with charging more for its products, according to BAV.

Even at 40, the company hasn't lost its passion, Thomas said. She said she wanted to work there since seeing the famous 1984 Macintosh commercial, in which a young woman hurls a hammer at the giant image of a Big Brother figure.

The idea of joining what was then a tech upstart didn't sit well with her father, a career IBM scientist, who advised Thomas: "You need to think with your head and not your heart."

But Thomas said: "I thought with my heart."