US & China: A Tale of Stolen Trade Secrets 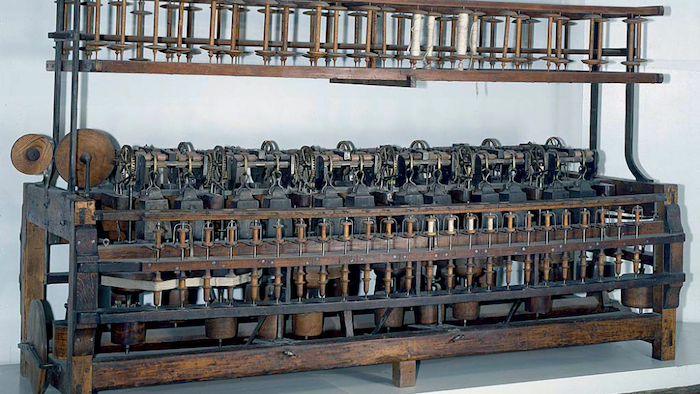 This undated image provided by the Smithsonian Institution shows Samuel Slater's Spinning frame that is part of the permanent collection of the Smithsonian’s National Museum of American History. Slater of Derbyshire, had apprenticed under a leading British industrialist. Figuring his prospects were brighter across the Atlantic, Slater disguised himself as a farmer, boarded a ship to the United States, signed on with a business owner in Rhode Island and replanted Britain’s cutting-edge cotton-spinning technology on American soil. In the United States, he was sometimes called “the father of the American Industrial Revolution.’’
Eric Long/National Museum of American History, Smithsonian Institution via AP

WASHINGTON (AP) — The upstart nation was a den of intellectual piracy. One of its top officials urged his countrymen to steal and copy foreign machinery. Across the ocean, a leading industrial power tried in vain to guard its trade secrets from the brash young rival.

In the late 18th and early 19th centuries, the rogue nation was the United States. The official endorsing thievery was Treasury Secretary Alexander Hamilton. And the main victim was Britain.

How times have changed.

Now, the United States accuses China of the very sort of illicit practices that helped America leapfrog European rivals two centuries ago and emerge as an industrial giant.

"The message we are sending to China today is, Do as I say, not as I did,' " said Peter Andreas, professor at Brown University's Watson Institute for International and Public Affairs. "The fact of the matter is that the U.S. was the world's hotbed of intellectual property theft."

Having imposed tariffs on $250 billion in Chinese goods, the Trump administration is trying to force Beijing to abandon what it calls its brass-knuckles drive to exploit American technology to speed its own economic modernization. The administration alleges — and many China watchers agree — that Beijing steals trade secrets and coerces U.S. companies to hand them over as the price of admission to the vast Chinese market.

More than two centuries ago, the young United States, an agrarian backwater lacking in skilled workers, held a different view of other nations' trade secrets: They were, it seemed, up for grabs. In 2012, having surveyed the sordid history of U.S. industrial espionage, the journal Foreign Policy called America "the China of the 19th century.

"Only after becoming the leading industrial power did it become a champion of intellectual-property protections," said Andreas, author of "Smuggler Nation: How Illicit Trade Made America."

Hamilton, determined to transform America into an industrial power, argued in 1791 that the United States needed "to procure all such machines as are known in any part of Europe."

Trouble was, Britain, the world's technological leader, closely guarded its advantages. The London government imposed a 200-pound fine (equal to roughly $22,000 today) on anyone who tried to spirit industrial equipment out of Britain — a penalty that escalated to 500 pounds ($55,000) for critically important textile machines, according to research by Doron Ben-Atar, a Fordham University historian and the author of "Trade Secrets: Intellectual Piracy and the Origins of American Industrial Power."

For the 18th century United States to build its economic might, highly skilled or knowledgeable people were just as tempting a target as hardware. In the days before instruction manuals, manufacturers needed workers who knew how to assemble and operate machines acquired from overseas. Wary of the intrusion, Britain officials threatened headhunters with a year in prison for every British worker they recruited to work overseas.

Yet they couldn't stop the brain drain, which the U.S. government actively encouraged. In 1791, Hamilton authorized the Treasury to pay $48 to subsidize the living expenses of an English weaver who pledged to deliver to the U.S. a copycat version of a British spinning machine.

One key defection was Samuel Slater of Derbyshire, who had apprenticed under a leading British industrialist. Figuring his prospects were brighter across the Atlantic, Slater disguised himself as a farmer, boarded a ship to the United States, signed on with a business owner in Rhode Island and replanted Britain's cutting-edge cotton-spinning technology on American soil. In the United States, he was sometimes called "the father of the American Industrial Revolution."

Back in Britain, he was accorded a rather different nickname: "Slater the Traitor."

Perhaps the most impressive heist was orchestrated in the early 1800s by Francis Cabot Lowell, the Massachusetts industrialist. During a tour of England and Scotland, Lowell had visited British textile factories and managed to memorize their design and inner workings. On the voyage back to America, Lowell's ship was stopped and searched by British officials who had been tipped off that he might have stolen industrial designs. They found nothing; the secrets were all in Lowell's head. He would go on to establish a textile-producing empire in Massachusetts.

Intellectual pirates were celebrated in the young United States, just as they are now in China. A man who smuggled a cotton-processing machine from London was hailed by one Pennsylvania trade group as "the ingenious artizan who counterfeited the Carding and Spinning Machine" and was promised awards and prizes, according to Andreas' book. His copycat equipment was displayed on a float in Philadelphia's July 4 parade of 1788.

Likewise, today's Chinese industrial spies sometimes earn public recognition. The Justice Department asserts that a former Coca-Cola engineer who is accused of stealing trade secrets worth $100 million was partly scheming to win the Chinese "Thousand Talent" award, as well as an award from Shandong Province for people who transport valuable technology to China.

Douglas Irwin, a Dartmouth College economist who wrote a 2017 history of U.S. trade policy "Clashing Over Commerce," cautioned that the early American efforts to gain a technological edge were nowhere near as comprehensive as China's efforts are today. In an audacious blueprint called Made in China 2025, Beijing has designed a plan to create world-beating Chinese companies in such advanced fields as robotics and electric cars. In pursuing this goal, the U.S. charges, China has unfairly subsidized its own companies and hobbled foreign competitors.

By contrast, Congress wouldn't approve Hamilton's most ambitious plans for a U.S. industrial policy, Ben-Atar has noted. But the United States back then didn't really need much help from the government, he said. It enjoyed — and enjoys — an advantage that today's China doesn't: Foreigners want to live in America. And those who do bring their knowledge and talent.

China, ruled by an authoritarian Communist regime, isn't very inviting to foreigners who might otherwise put down roots.

"The best and brightest in the world still don't go to China," Ben-Atar said. "They go to the Silicon Valley and Route 128 in Boston and the Research Triangle in North Carolina. ... The jury's out on whether a society dedicated to repression can actually become the mecca of innovation."

Even so, Ben-Atar doubts that the U.S. can effectively keep its technology from slipping away.

In the 13th century, he noted, the Italian city-state of Venice sought to protect its glass-making industry by isolating its artisans on the island of Murano. Venice's secrets got out anyway.

Andreas doesn't object to the U.S. trying to combat Chinese piracy. But "the finger-pointing and righteous indignation," he said, "should be tempered by a historical reality check."

Great insight! Thank you! At least I know I'm not crazy!