The NFL has committed to a $60 million effort to improve helmets. 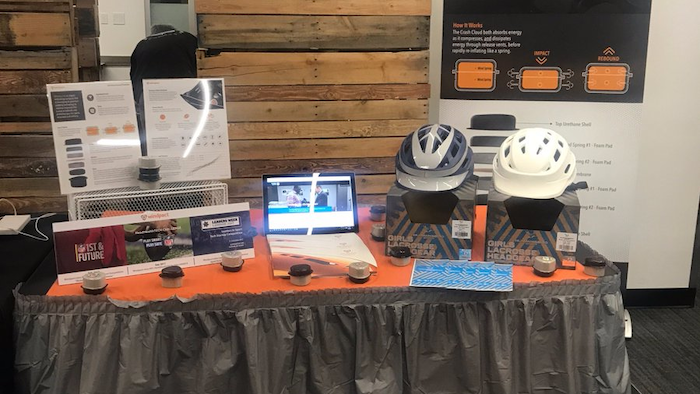 PHOENIX (AP) — The NFL has awarded nearly a quarter-million dollars to two companies seeking to enhance protection provided by helmets.

Windpact, founded by former NFL cornerback Shawn Springs, is receiving $148,820 to tailor its padding technology, called Crash Cloud, for use in one Schutt's helmets. Crash Cloud uses tiny air-filled compartments which can compress during impact, and then refill to regain their shape.

Auxadyne was awarded $86,688 to advance its XPF material, an energy absorber that becomes more dense upon impact.

The company will use this unique material, the only commercially available of its kind, to create a football helmet padding system that can reduce the impact to an athlete's head.

The awards, announced Tuesday, were presented as the sixth installment of the league's HeadHealthTECH Challenge series. The NFL has committed to a $60 million effort to improve the understanding of how head injuries occur in the sport, and to create incentives for helmet manufacturers, businesses, entrepreneurs, universities and others to develop and commercialize new and improved protective equipment.

"We see these ideas becoming more goal-oriented," said Jeff Miller, the NFL's executive vice president of health and safety initiatives. "There's been an evolution that way and will continue to be. As we continue to interface with these companies, and provide the funding, they can increase the amount of research to help design equipment based on what occurs in the on-field environment."

Springs played 13 pro seasons; his father, Ron, also was an NFL running back, and two of Shawn Springs' sons have played college football. His Windpact previously won grants in the second portion of the HeadHealthTECH Challenge as well as in the NFL's 1st and Future. Clearly, in the view of the NFL, Windpact is doing some impressive work, which now includes the helmet liner system intended to protect the head from impacts at a variety of speeds and angles.

The padding system can be used in existing helmets to replace traditional foam pads. And it aims to address the wide range of impacts NFL players experience at different positions by absorbing and dispersing energy.

"That's the way to develop helmets," Springs said," using an existing model and combining our technology for the optimum product and protection."

"We'll see what possibilities there can be, and how we can speed up the development time of these helmets. "We'll see how we evolve as better materials come out to make the helmet better. This (HeadHealthTECH Challenge) program is a prime example of the NFL's real push in this area."

Springs points to three elements that illustrate the efforts to improve player safety on all levels.

"In the NFL, they have expert medical observers who are watching for an injured player and having them removed from a game," he said.

"In youth football they eliminated the kickoff." Pop Warner also is removing the three-point stance for some age groups.

"And manufacturers are bringing in former athletes as consultants, like Riddell has done with Peyton Manning."

The use of scientists and researchers in the medical area also is a key to making helmets safer.

Indeed, position-specific helmets could be on the horizon, says Dr. Jeff Crandall, chairman of the NFL's Head, Neck, and Spine Engineering Subcommittee. Such a development would be critical because "lineman have impacts different from defensive backs or receivers. Quarterbacks have impacts to the back of the helmet we don't usually see with other" positions.

"We'll see what possibilities there can be, and how we can speed up the development time of these helmets," Springs said. "We'll see how we evolve as better materials come out to make the helmet better. This (HeadHealthTECH Challenge) program is a prime example of the NFL's real push in this area."

Auxadyne first developed athletic protective equipment and footwear. It has an exclusive licensing agreement with Florida State University for the design, manufacturing and distribution of the first commercially available auxetic foam in a variety of medical devices and protective equipment. Its technology emerged from a two-year funding project by the Veterans Administration at FSU.

Join David Mantey, Curt Anderson, Damon Pistulka and Gary Bales to talk about easy e-commerce strategies for manufacturers. We'll tell you how to find your pink shoe with purple laces and fix your we-we problems (it will all make sense). Watch it now.
Nov 30th, 2021