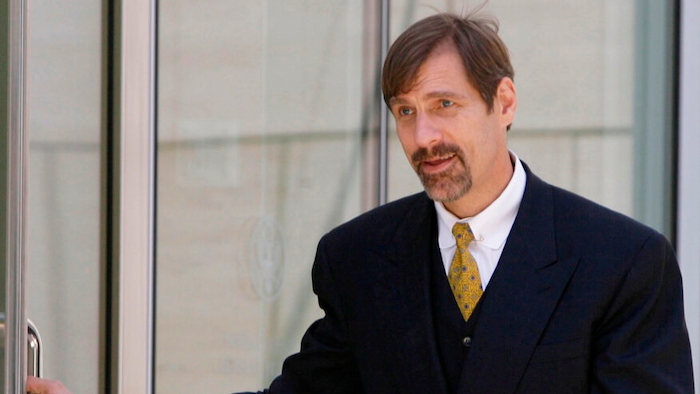 In this June 16, 2008, file photo, Broadcom co-founder Henry T. Nicholas III leaves the Ronald Reagan Federal Building after a hearing in Santa Ana, Calif. Authorities in Nevada have filed felony drug charges against the California tech billionaire and victim rights advocate arrested in August with what police said were briefcases full of drugs. Nicholas and a woman arrested with him, Ashley Fargo, were named in a complaint filed Wednesday, Feb. 13, 2019, in state court in Las Vegas.
AP Photo/Nick Ut, File

Broadcom Corp. co-founder Henry T. Nicholas III and a woman who was with him, Ashley Christine Fargo, face five drug trafficking and two drug possession charges in a criminal complaint filed in state court in Las Vegas. Nicholas stepped down as president and CEO of the company in 2003.

The two have been free without bail pending charges since their arrests Aug. 7 at the Encore resort. They're due for arraignment March 11.

"Dr. Nicholas is a philanthropist, an advocate for victims' rights, a scientist and co-founder of a global company," said Chesnoff, noting that Nicholas holds a doctorate in electrical engineering. "He is not a drug trafficker."

"Ms. Fargo is looking forward to correcting the sensational and erroneous information in some of the media coverage of this case," Brown said.

The drug trafficking charges stemmed from the amount of controlled substances found, according to the complaint.

Nicholas identified a gas canister in the room as nitrous oxide "for recreational use," according to a Las Vegas police arrest report, and Fargo was found with a deflated balloon in her mouth. The arresting officer suggested the balloon could have been used to inhale the gas.

Brown said Fargo was asleep, not unconscious, and woke after hotel security broke through the latched hotel room door.

Nicholas, 59, who uses the name "Nick," lives in Newport Coast, California. He and a partner are credited with starting Broadcom in a Southern California garage in 1991. It is now a publicly traded Fortune 500 computer software, semiconductor and infrastructure company.

In 2008, Nicholas was indicted in California on federal securities fraud and drug charges that were later dismissed.

That same year, he backed a California victim rights measure named for his sister, Marsalee "Marsy" Nicholas, who had been stalked and killed by an ex-boyfriend 25 years earlier.

Voters in Nevada passed a Marsy's Law initiative last year to expand the definition of a victim and list 16 rights including privacy, protection from a defendant, notice of court and parole hearings and "full and timely restitution."

Marsy's Law for All spokeswoman Gail Gitcho said 11 states now have similar laws. The organization issued a statement saying that Nicholas continues to lead the national organization that he funds.

"We have complete faith that the justice system will return the proper result in his matter," the statement said.