A see-through design means consumers can watch the bread being mixed, formed, baked and sliced. 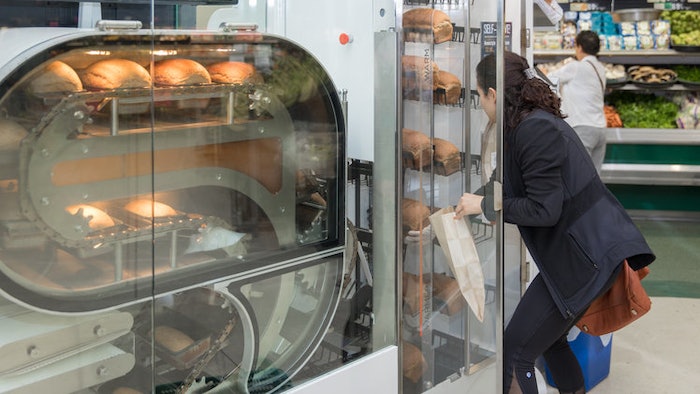 With a 22 square-foot base and the ability to make up to 10 loaves at once, the Breadbot is not a consumer device. Rather, it's being positioned as a way for grocery store customers to select the ingredients they want in having their bread made from scratch.

The machine also uses 20 unique sensors to adjust preparation in compensating for variables like air temperature, humidity, and elevation.

To get the unit started, dry ingredients for up to 50 loaves of bread are loaded into the hopper. After the process starts, the first loaf is ready in about 90 minutes.

Customers can purchase a cooled and sliced loaf an hour after it's been baked, or pick up a hot loaf as soon as 18 minutes after it has exited the oven.

According to the company, the Breadbot can produce up to 235 loaves of bread per 24 hours. It's recommended to allow 30 minutes each day for self-cleaning. The overall benefits of the machine stem from the ability to provide, fresh bread with less waste for the store.

Although no official pricing has been released, it's been reported that the machine will be made available to stores for about $100,000 via a five-year lease.

3 Steps for Mass Customization in Mfg.

3 Steps for Mass Customization in Mfg.