Can the Gender Gap Be Fixed By Boosting Women's Confidence?

Girls underrate their abilities on tasks and careers that are culturally considered male. 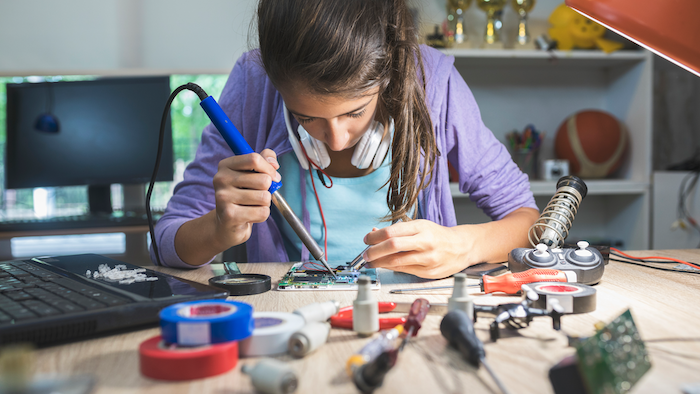 The gender gap in math and science isn’t going away. Women remain less likely to enroll in math-heavy fields of study and pursue math-heavy careers. This pattern persists despite major studies finding no meaningful differences in mathematics performance among girls and boys.

Among U.S. students who score the same on math achievement tests, girls are less confident in their math ability than boys are. That confidence predicts who goes on to major in math-heavy fields like engineering and computer science. The gender gap variesacross STEM fields – science, technology, engineering and math. Women remain underrepresented in high-earning and high-demand fields that require the most math skills, such as engineering and physics. My team’s recent study finds women are 12 percent less likely to earn math-heavy STEM degrees than men.

My colleagues and I have studied gender gaps in STEM for several years, examining U.S. data on teenagers as they move from high school to and through college. Across our studies, we find a consistent pattern: Girls with strong mathematics ability in high school do not necessarily leave the sciences entirely, but they major in math-heavy fields at significantly lower rates than their otherwise identical male peers.

Our findings build not only on our own prior work, but also on decades of research finding girls underrate their abilities on tasks and careers that are culturally considered male.

Contemporary data on U.S. students who were 10th graders in 2002 and were followed through 2012 show that girls do better in school than boys do and are more likely to graduate from college. Girls are increasingly prepared for college-level math, thanks to the fact that they take more STEM courses in high school, even in computer science.

In one of our case studies on computer science undergraduates at two research universities, we found that women were more likely to take further computer science courses if they perceived that they had high skills and felt challenged. These findings complement those of our national study, which showed that women with positive math ability beliefs were more likely to choose math-heavy STEM majors.

Girls are excelling at math. Still, boys think they can do better. Among those at the 90th percentile of mathematics ability in 12th grade, boys rate themselves higher than do their female peers.

The push toward equity has not just been slow; it at times seems to go in reverse. Emerging research suggests gender gaps in STEM seem wider in more economically developed countries and more affluent zip codes. Since the personal computing and technology boom, women have been losing representation among degree earners in computer science.

Among U.S. universities, we found the gender gap in math-heavy fields was widespread, but worse at less selective institutions. And, while the majority of community college students are female, after controlling for student and institutional characteristics, the gender gap in natural and engineering sciences at two-year colleges is slightly worse – 12.4 percent more men – than at four-year institutions – 11.7 percent more men than women.

There are signs of promise as institutions collaborate on gender equity and try other interventions, from introductory course redesign to curricular changes aimed at students’ beliefs in their abilities. While not directly focused on this issue, organizations may engage in confidence-raising to get girls and women into math-heavy fields like coding.

As someone who has studied this issue closely, I believe those of us interested in gender equity should make female confidence a priority. This includes both directly building up girls’ and women’s confidence and educating influential actors in their lives. Socializing messages and support from mentors, teachers, peers and parents may help counter gendered stereotypes and create spaces for girls to build confidence in their ability to succeed in math and science.

This article is republished from The Conversation under a Creative Commons license. Read the original article here: http://theconversation.com/the-key-to-fixing-the-gender-gap-in-math-and-science-boost-womens-confidence-105109.

SinoPharm Group's chairman said testing is "in the last kilometer of a long march."
Oct 20th, 2020
Follow Us
Most Recent