The 1967 crash killed the pilot during a world speed-record attempt. 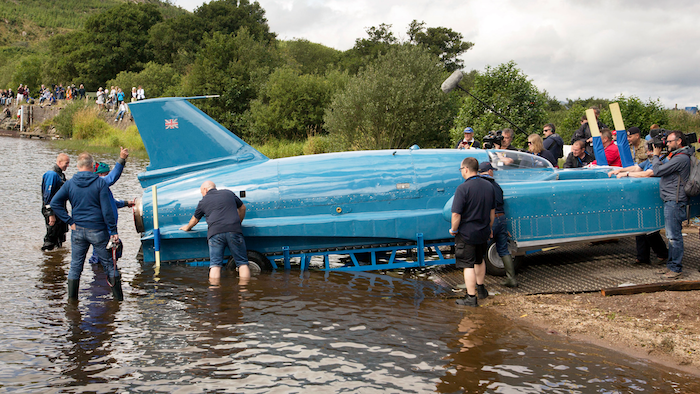 The restored Bluebird K7, which crashed killing pilot Donald Campbell in 1967, takes to the water for the first time in more than 50 years off the Isle of Bute on the west coast of Scotland, Saturday Aug. 4, 2018. The famed jet boat Bluebird has returned to the water for the first time since a 1967 crash that killed pilot Donald Campbell during a world speed-record attempt. Watched by Campbell's daughter Gina Campbell, the restored Bluebird was lowered Saturday into Loch Fad on Scotland's Isle of Bute, where it will undergo low-speed tests.
David Cheskin/PA via AP

LONDON (AP) — The famed jet boat Bluebird returned to the water Saturday for the first time since a 1967 crash that killed pilot Donald Campbell during a world speed-record attempt.

Watched by well-wishers including Campbell's daughter Gina Campbell, the sleek blue hydroplane was lowered into Loch Fad on Scotland's Isle of Bute, where it will undergo low-speed tests.

Campbell had already set eight land and water speed records when he attempted to break his own 276.3 mph (445 kph) water-speed record on Jan. 4, 1967 on Coniston Water in northwest England's Lake District.

The jet-powered Bluebird roared past 300 mph (482 kph) before it vaulted into the air, flipped and crashed into the lake, breaking in two and killing the 45-year-old Campbell.

It was 34 years before divers managed to raise the Bluebird's wreckage from the bottom of 150-foot (45-meter) deep lake in March 2001.

Human remains were found near the boat and confirmed by DNA testing as belonging to Campbell. In September 2001, his body was taken on a final boat trip around the lake where he died before being buried in a nearby churchyard.

A team has been working for 17 years to restore the vessel and hopes to return it to the Lake District next year.

The plans to rebuild the Bluebird faced some opposition, but gained support from Gina Campbell, who was 17 when her father died. On Saturday, she held her father's mascot — a stuffed bear named Mr. Whoppit that was recovered from Coniston Water after the crash.

She said she was "overwhelmed" by the occasion.

"I hope my dad's looking down from above and telling everybody what a good job was done," she told the BBC.