The product by Yardarm Technologies will notify dispatchers in real time when an officer's gun is taken out of its holster and when it's fired. It can also track where the gun is located and in what direction it was fired. 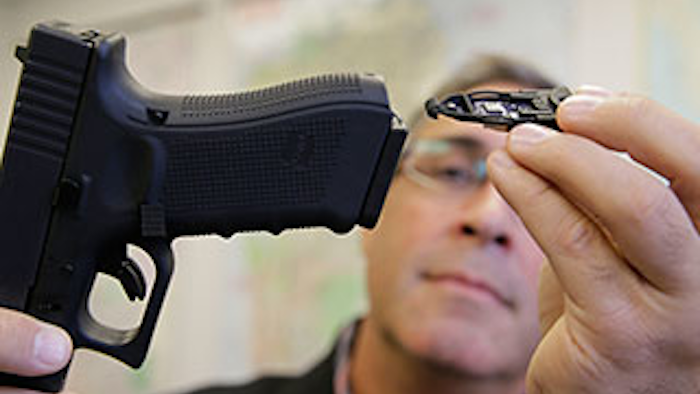 WATSONVILLE, Calif. (AP) — A Silicon Valley startup has developed technology to let dispatchers know when a police officer's weapon has been fired.

The latest product by Yardarm Technologies would notify dispatchers in real time when an officer's gun is taken out of its holster and when it's fired. It can also track where the gun is located and in what direction it was fired.

Santa Cruz County Sheriff Phil Wowak, whose agency is among two testing the technology, said it will allow the sheriff's office to see whether deputies are in trouble and unable to ask for assistance.

"That's the worst nightmare for any police officer in the field," he said.

The system will not include a remote disabling mechanism. Yardarm was pursuing that technology and demonstrated it at a conference in Las Vegas last year, but it has since abandoned that effort, according to the Capitola, California,-based company's marketing vice president, Jim Schaff.

Yardarm's system would have triggered an alarm on an owner's cellphone if a gun had been moved, and the owner would then have been able to hit a button to activate the safety and disable the weapon.

Schaff would not say exactly why the company gave up on remotely disabling guns. Gun rights advocates have raised serious concerns that so-called smart gun technology could be used to limit their access to weapons.

The developers insist their latest technology is not creating a smart gun, but rather is "police gunfire tracking technology."

Sam Paredes, executive director of Gun Owners of California, said his organization isn't opposed to the particular technology Yardarm is developing and other smart-gun technology.

Smart gun technology has been around for decades, but technological advances and recent large shootings have prompted more than a dozen smart gun companies to begin developing weapons. Some began selling in gun shops this year, but analysts say controversy surrounding the technology could limit sales.

The technology that tracks an officer's gun relies on the Internet and requires a small device that can fit in the handle of most police handguns. It connects to the officer's smart phone using Bluetooth.

"The officer simply inserts it into the back of the firearm, and now it's installed. They don't even know it's there anymore," Schaff said during a recent demonstration.

Yardarm is paying for the test in the hopes they can develop the technology nationwide and charge departments for it next year.

Schaff said the company has not yet determined a price.