Twice as fast as an airplane, cheaper than a bullet train and completely self-powered: that's the mysterious transportation system that inventor and entrepreneur Elon Musk is promising to reveal design plans for Monday. 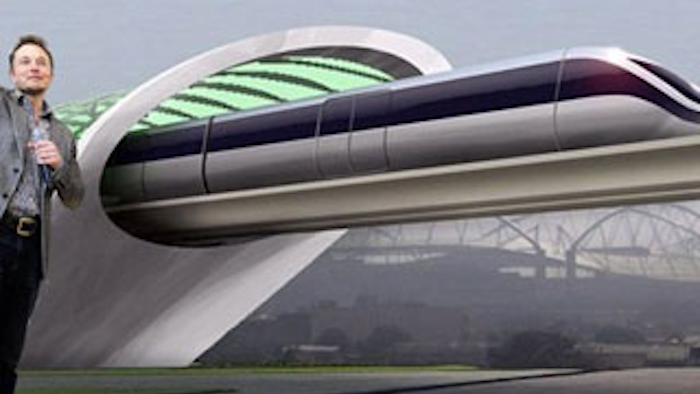 SAN JOSE, Calif. (AP) — Twice as fast as an airplane, cheaper than a bullet train and completely self-powered: that's the mysterious transportation system that inventor and entrepreneur Elon Musk is promising to reveal design plans for Monday.

Musk has been dropping hints about his "Hyperloop" system for more than a year during public events, mentioning that it could never crash, would be immune to weather and would move people from Los Angeles to San Francisco in half an hour.

Coming from almost anyone else, the hyperbole would be hard to take seriously. But billionaire Musk — who sold his first computer program, a $500 space game called Blastar, at age 12 — has earned his reputation as an inventor and entrepreneur, co-founding online payment firm PayPal, electric luxury carmaker Tesla Motors Inc. and rocket-building company SpaceX.

During a Tesla earnings call Thursday, Musk said he would reveal plans for the Hyperloop on Monday. But he said he is too focused on other projects to consider actually building it.

"I think I kind of shot myself by ever mentioning the Hyperloop," he said. "I don't have any plans to execute, because I must remain focused on SpaceX and Tesla."

He said he would fulfill his commitment to publishing a design, and he said he invites critical feedback after its release Monday to "see if the people can find ways to improve it." It will be an open-source design, meaning anyone can use it and modify it.

Also Thursday, Musk said during a Google Hangout with Sir Richard Branson about entrepreneurship, "It does involve a tube, but not a vacuum tube."

His hints and promises have prompted a flurry of online speculation.

Canadian John Gardi, a self-described "tinkerer," posted online and tweeted his conjecture a few weeks ago to Musk.

"I believe that Hyperloop is merely a modern day version of the pneumatic tubes used in banks, stores, and industry to move money and small items over long distances or to other floors of a building," he said.

Musk responded, "Your guess is the closest I've seen anyone guess so far."

Challenge For Wind Power Can Be Reaching Customers